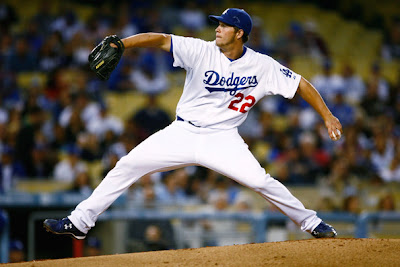 Two World Series victories in three years and their core is both intact and only now starting to reach their prime. As good as the Dodgers look on paper, I'll still take this group over them.

The decline of Tim Lincecum is disheartening but the rotation still features two top notch aces in Matt Cain and Madison Bumgarner. The Giants were lucky enough to make it through the whole year without any injuries to their starting pitchers, only 2 games were started by someone outside of their regular 5-man rotation. That's not likely to happen again.

With a strong defense, great starting pitching, versatile bullpen, good tactical manager, and a lineup that was actually one of the best in baseball last year, the Giants are primed for another run into the playoffs. They're the best team in this division, though the competition promises to be tougher than in recent years.

With new owners now officially in place, the Dodgers quickly flipped the script and created a roster of overbloated salaries, amounting to the highest payroll in the sport. There are plenty of big names here but beyond the handful of stars there's a disconcerting group of scrubs.

No team in baseball has as high a variance in possible outcomes as this year's Dodgers---ESPN the Magazine built their MLB preview issue around Dan Szymborski's ZiPS projection system according to which the Dodgers can just as easily be an 83-win disappointment or a 98-win juggernaut. As I see it, the starting rotation will carry this team along and their chances of contending revolve around keeping enough of the highly-paid stars healthy and happy. They already have a couple major holes in the lineup and if any of the big-time players like Hanley Ramirez, Matt Kemp, or Carl Crawford get hurt, this $200 million Ferrari will be rolling on rickety old wooden stagecoach tires. I think they'll end up winning one of the Wild Card spots regardless.

3. Diamondbacks
PECOTA: 84 wins
My pick: Under

Team Scrappy, the Snakes shedded a bunch of talent in the offseason in the hopes of fielding a more "gritty" team. Since there's no objective way to actually judge or predict grittiness, this approach has left most analysts scratching their heads. What most are afraid to admit is the Snakes seem to have resorted to assembling a team of mostly white players.

This D'backs team will be known for their extremely deep rotation, possibly one of the best starting staffs in the NL. They'll be carried by that pitching staff because the offense, despite no glaring weaknesses, doesn't project to be much better than average. I like Miguel Montero and Paul Goldschmidt plenty, but there isn't any true impact bat in this lineup anymore. I think that'll keep them right around the .500 mark and a few games short of the Wild Card.

Yesterday afternoon I had the opportunity to personally scout the Padres in their visit to the San Antonio Alamodome to play the Texas Rangers in their final exhibition game. It was the first time the Alamodome ever hosted baseball and made for a beautifully quirky field arrangement (258-feet to rightfield with a big wall out there, and a 358-foot left-field line): 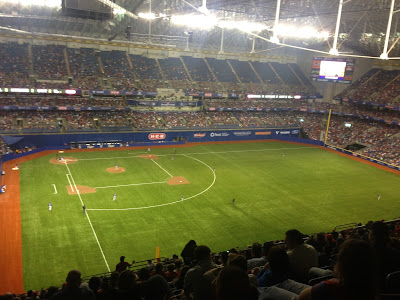 My old Staten Island neighbor Jason Marquis started for the Pads and didn't fare so well, lacking control he walked a few too many guys (against a Rangers lineup of second-stringers) and gave up a cheap homerun into the first row of the short right field porch, falling behind 5-0. San Diego mounted some scoring, though, including two homers knocked by the ever-reliable and underrated Chris Denorfia.

That one game was sort of a microcosm for how the Padres will perform this year. They've got no starting pitching to back up what will be one of their best offensive attacks in a few years. The bullpen is always a major strength for them, and you can try to build an argument for Wild Card contention based on a deep stable of hitters approaching their prime, but the starting rotation needs some new blood. If young lefties Robbie Erlin and Cory Luebke can find their way into the rotation early on, and if fireballer Andrew Cashner can harness his heater in a starting role, this team has a chance. If not, they'll struggle to reach .500.

Despite a nice trio of young hitters in Troy Tulowitzki, Carlos Gonzalez, and Dexter Fowler, this team is a disaster with no signs of getting better anytime soon. Their consistent failure to assemble a respectable team around those three is a testament to the organization's overall ineptitude.

If you're looking for a great bet to place this year, Vegas odds have the Rockies' Over/Under at 71.5 wins. I'd bet a good chunk of change on the Under.
Posted by PQ at 12:47 AM