"Do I dare
Disturb the Universe?
In a minute there is time
For decisions and revisions which a minute will reverse."
- T.S. Eliot, The Love Song of J. Alfred Prufrock

I'm determined to jot down a fun little synchronicity I experienced today before Wednesday fades away.

Life here in Austin remains busy but exciting and fun. When I finally got a chance to do a little bit of writing today I found myself deeply considering Wednesday and the meaning behind it. An extremely interesting (though lengthy) interview with Robert Anton Wilson I heard recently put my mind on this path of considering the archetypal meanings behind our days of the week. In his discussion, which I will summarize more completely in a future post, he attempts to connect the 8-circuit model of consciousness to the days of the week. Wednesday represents the 3rd circuit, the level of communication, which is usually referred  to as the semantic circuit. It is by semantics, the organization of our vast symbols and data of language, that I am able to communicate with, for instance, Lao Tzu who wrote the Tao Te Ching 2,500 years ago.

Wednesday is the day of communication, in Latin languages this is more obvious. Wednesday in Spanish is miércoles, in French it's Mercredi, Italian mercoledi---all named after Mercury, the messenger with winged sandals.

On another note, I've been engaged in reading an essay by Joyce scholar Eric Rosenbloom (a perfectly Joycean surname) breaking down the incredible array of meanings contained within the little story of the prankquean in Finnegans Wake (p. 21-23). He abbreviates prankquean with "PQ" throughout the essay and, among the many layers of meaning in that part of the story, is the prankquean as the Egyptian goddess Nut or Nuit whose "body arched over the earth" forming the sky. This is a well-known image and in fact it's on the cover of a book I just completed (and will review soon), The Illuminati Papers by Robert Anton Wilson. 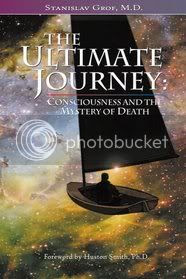 The sky goddess swallows the sun each night and after it travels through her body it is released in the morning (pooped out? I'm not sure) where it then floats along her body back to her mouth to be swallowed again. In the Egyptian Book of the Dead, which figures deeply into Finnegans Wake, "the deceased soul was to join the sun on its journey." Rosenbloom notes that later Egyptians conceived the sky as a vast ocean, with the journey of the deceased taking place inside of a boat. (This perfectly reminds me of the cover image on Stanislav Grof's excellent book, The Ultimate Journey: Consciousness and the Mystery of Death.)

This is going somewhere. I promise.

In the Wake story of which Rosenbloom speaks, the prankquean kidnaps a set of twins ("jiminies" or gemini, also the twins Isis and Osiris) from the castle of Jarl van Hoother (a dream-distorted version of the Earl of Howth), and runs off with them. Joyce then gives us this image:


"The prankquean was to hold her dummyship and the jiminies was to keep the peacewave and van Hoother was to git the wind up." (FW, p. 23)

In a footnote, he points out that this same image appears in a book by 16th-century philosopher Giordano Bruno (an Oriental-minded heretic burned at the stake by the church and later revered by Joyce):

The gemini twins are here represented by the flames on the either side of the ship's mast. The name of the book in which this appears? The Ash Wednesday Supper.
Posted by PQ at 11:45 PM