The Gza aka The Genius, one of the core members of the Wu-Tang Clan (he, Rza, and ODB are all cousins and had been running around as the All In Together Now crew prior to the Wu birth) will be delivering a lecture at Harvard University next Thursday December 1st. It's open to the public, I wish I could go up there and witness it. 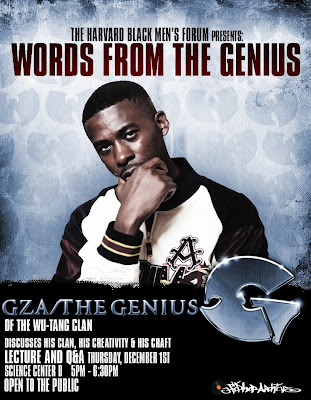 Gza is getting up there in age these days and I've rashly complained about his sleepy flow and delivery on his last disappointing (for me) album but he still remains one of the premier intellectual lyric crafters on the planet. His Liquid Swords and Beneath the Surface albums are personal classics and he was always one of my top 3 favorite emcees in the 9-member Wu-Tang Clan.

He's always good for giving forth fascinating thoughts on the universe, chess, poetry, water, etc in interviews and discussions so I imagine this Harvard lecture will be something pretty monumental. A few years back, an art magazine in Germany did a full issue on The Gza/Genius called "Weapons of Math Destruction" that was superb and I ended up purchasing this magazine straight from Berlin and still have it (in my Staten Island bookshelf, actually). When I go back up to New York for Christmas this year I'll be sure to retrieve that little booklet and inscribe some quotes from it here.

For now, here are a few exemplary Gza tracks beyond the commonplace favorites on Liquid Swords (an album that Rolling Stone magazine listed as one of the "1001 Albums You Must Hear Before You Die"). 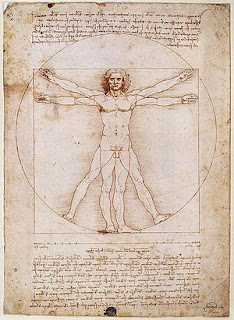 Many people forget or just don't even know the profundity of this man's mind and the minds he molded. The Rza (one of the greatest teachers in my life) was mentally civilized and enlightened originally by his older cousin Gza (real name Gary Grice). Gza also mentored and brought into the globe's musical atmosphere two other of my favorite artists/lyricists/thinkers in Killah Priest and Masta Killa. (It's worth noting that the frequency of the word Killah in Wu-Tang names is, as Killah Priest has explained in the past, not simply a different or creative way to spell "killer" but a reference to killing the negative thoughts in one's own and in listeners' minds, the "-ah" suffix combining Allah with the slang Killa; the point is to rebuild oneself into a knowledge of one's own godliness, the Arm-Leg-Leg-Arm-Head so beautifully captured by Da Vinci's Vitruvian Man.)

Gza sparsely appeared on the Clan's third album, The W but he delivered a few incredible verses. Observe:

To top it all off, here is a film clip with Rza, Gza and their good friend Bill Murray: