"No other human being in the history of the world, including Beethoven, has ever given every single piece of emotion and thought and feeling the way Joyce did. He dredged up every ounce of his soul, every cell, every gene."
- John Gardner on Finnegans Wake

"We may come, touch and go, from atoms and ifs but we're presurely destined to be odd's without ends."
- Finnegans Wake, pg 455 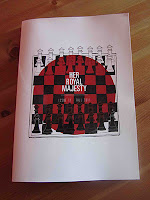 Artist Stephen Crowe has been carrying out the ambitious and impressive task of illustrating James Joyce's Finnegans Wake one page at a time for almost two years now over at his blog Wake in Progress. I've drawn attention to his excellent work before and it's nice to see that he's getting more and more recognition for it. On Bloomsday earlier this year, his art was displayed at the Shakespeare and Company bookshop in Paris and recently some of his work was prominently featured in an art magazine called Her Royal Majesty. (The magazine's got a cool cover, too, shown on the right.)

Their website published a brief but interesting interview with Crowe, delving into the reasons behind the project and what his goals are with it. I highly recommend checking it out and there's a nice sampling of his art pieces there, too. Considering the quote at the very top of this post, it's amazing to contemplate the fact that, as Crowe declared in the interview, "Finnegans Wake might be the single most neglected book in history by a major writer." It's admirable that Crowe is undertaking this project to try and bring light to this classic book of the dark and the work he's been creating in the process has been extremely impressive. I look forward to whenever he might complete this enterprise so that perhaps a new edition of the Wake can be put together with Stephen's illustrations on each page. It's a book of nearly 700 pages, though, so it's gonna be a while. 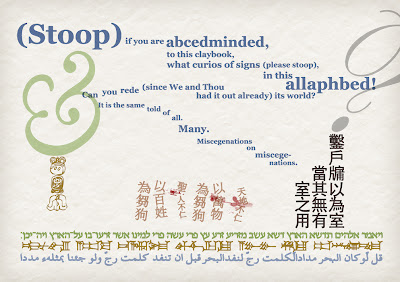 If you've got any interest in Joyce, you must explore Stephen Crowe's blog devoted to arguably the greatest and most neglected artistic achievement in human history. He makes it about as understandable as that crazy book can be and provides not just illustrations but occasional essays, including this one on why Finnegans Wake is better than Ulysses (though I offered my own response to this assertion in the comments). He's also selling framed prints now, hopefully I'll grab one of those this holiday season. 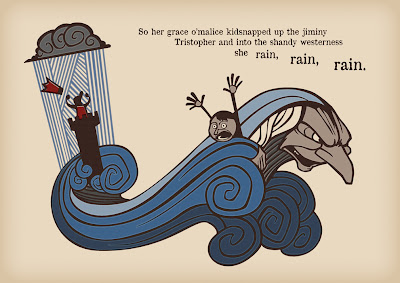