What isn't shown in the video is that after the line of students was sprayed in the face with pepper spray, officers tried to separate them using batons, and when students attempted to cover their face with clothing, "police forced open their mouths and pepper-sprayed down their throats. Several of these students were hospitalized. Others are seriously injured. One of them, forty-five minutes after being pepper-sprayed down his throat, was still coughing up blood." That quote is from a powerful open letter written by one of the school's professors to the school chancellor demanding her resignation.

Earlier in the week in New York, after police raided the encampment at Zuccotti Park, they disposed of some 5,000 books from the library that had been set up. There is no greater sign of the dire situation we're in than when authorities confiscate and destroy BOOKS, documents of knowledge. There are, in fact, few things that could rile me up more than that. Police forcing pepper spray down the throats of peaceful college students is one of those things.

An 84-year-old woman was pepper-sprayed in the face during a protest in Seattle this week. A priest was pepper-sprayed as well. A couple weeks ago, an Iraq War veteran nearly died when a tear gas canister was fired directly at his face. (By contrast, take a quick listen to this speech from President Obama earlier this year demanding that the Egyptian authorities "refrain from violence against any peaceful protesters." If you find the absurdity of his hypocrisy completely unbelievable, then you might need to take a look at all the Goldman Sachs employees currently in the Obama Administration. This is not a new phenomenon. )

If it hasn't sunk in yet, consider also that among the protesters on Thursday in New York City was a large group of children carrying signs and singing. There was also a retired Philadelphia police captain among the protesters and he was arrested in full police uniform.

I'm not sure there is an another image quite as striking as that. Perhaps only this one sums things up better: 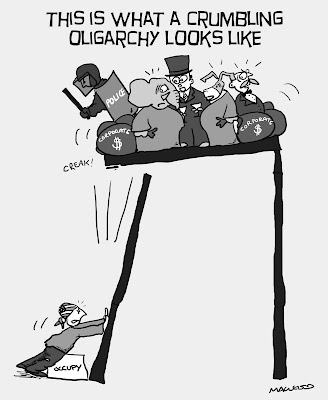 If somehow, someway you still do not understand the magnitude of what is going on or why it is happening, take a look at this New York Times article about the 100 million Americans that are now in poverty or on the brink of it.

As scary as things may seem, it is certainly an exciting time to be alive.
Posted by PQ at 1:32 PM