I spent this beautiful Sunday afternoon doing domestic chores (dishes and laundry) while watching the Padres play the visiting Colorado Rockies. In a game that felt like an intense pennant race battle, the Padres seemed to succumb to the pressure of their mounting winless streak which is now at 10 games.

Battling a Colorado team that they've had many tight and exciting lateseason battles against over the last five years, they got beaten and swept at home. The Rockies have now won 10 out of 15 games against the Padres this season and 7 out of 9 at Petco Park. The Rox look like they're mounting another one of their customary late season surges as they've now climbed to within 4.5 games of the division-leading Padres. Outfielder Carlos Gonzalez (whom the Rockies acquired from Oakland for Matt Holliday in 2008) is catching fire, currently leading the league in both batting average and slugging percentage. He had 3 hits and a run in the game against the Pads today and seemed to be in the right place every time a Padre smacked a liner or a flyball in his direction, always catching the ball with a nonchalance reminiscent of Andruw Jones' glory days. "I hate him, he's just so smug." 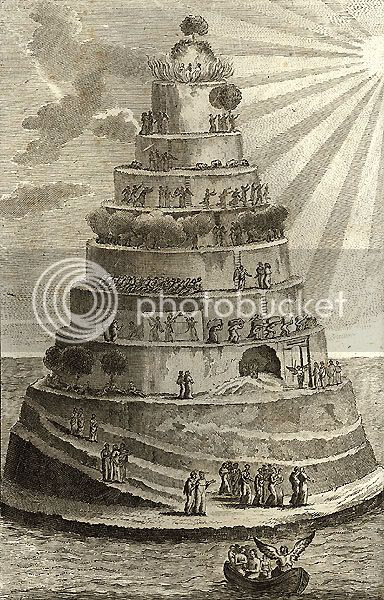 I read the Associated Press' postgame write-up and they described the Padres as "reeling" which invokes in my mind the image of the baseball season as a six-month long race up a mountain's spiral road. The mountain would look like Dante's vision of Mt Purgatory (to the right) and it's as if each team is a race car trying to race up to the top of that mountain. The Padres have been absolutely zooming along their upward path for the entire season but have hit a tiny little pebble that made them start to wobble off track a bit and now they're skidding along the very edges of the mountain. That's what I envision by the word "reeling" as a description for these pennant race Padres. The Rockies have been known to go on these late season streaks (last year they started September winning 10 out of their first eleven) and now they're zooming up towards the tightly matched Padres and Giants and will probably make it a three team race to the NL West finish line.

*   *   *
There was one guy on the Padres who came out to play today like he wanted to single-handedly end this miserable losing streak: Miguel Tejada. The 36-year-old fading superstar was on-point and energetic. Bud Black had moved him down to 5th in the order, demoting him from the #2 spot he'd been occupying and Tejada responded by smoking a single in his first at bat (before successfully stealing 2nd base) and then absolutely crushing a towering two-run homerun in the 6th to tie the game and create the only 2 runs the Padres would score in the game.

In the 9th inning when the Padres were down to their last chance to try and avoid their losing streak growing into double-digits, Tejada led off with a perfectly executed bunt (I usually hate the bunt, especially for a good hitter without great speed, but he placed it absolutely perfectly) for an infield single. The crowd and the Padres finally seemed like they had some life, some energy, some of that late inning intensity and enthusiasm they've regularly had for the whole season (and the last two months of the '09 season). Here was their chance to finally come up big, erase a 9th inning deficit, punch back at the slugging Rockies and here's what they did:

- Chase Headley: struck out swinging (on a pitch that looked right down the middle)

- Will Venable: struck out swinging (on a pitch that was right down the middle)

I felt throughout the entire game like I did while I was watching the Mets' final three games of the year in 2007 when Florida knocked them out of the playoff picture. Or 2008 when the Mets absolutely collapsed and fell from first place like the burning Lucifer being flung from heaven. He fell with such force that he smashed through to the middle of the earth, pushing up a mountain at the bottom of the earth that became Mt Purgatory.