Just read something extremely intellectually pleasing: a clear and lucid explanation of a part of Salvador Dali's painting Marsupial Centaurs. Came across it in my current research on the "paranoiac critical method" that Dali perfected and it's so good that I'd like to quote a huge chunk of it here.

Here's the painting we're talking about. 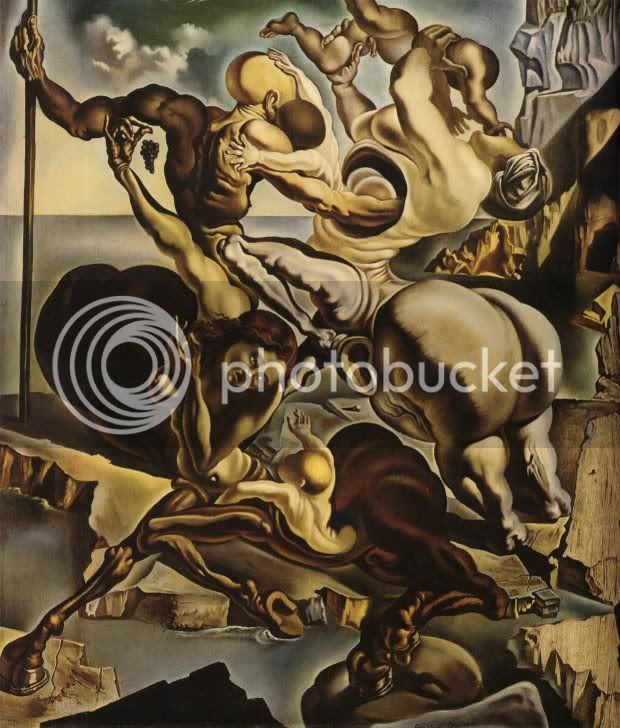 
When asked why the centaurs in his painting, Marsupial Centaurs, were riddled with holes, he replied, “The holes are like parachutes, only safer.” This response is often used as an example of Dali being Dali, purposefully obscure, self-absorbed, and downright snotty. The reader might interpret this comment as a nose thumbing, coupled with an “If you don’t know why the holes are there, you Philistine, I will never tell you.” The fact is, however, that Dali is simply stating the reason for the holes, which upon examination, becomes unmistakable, true to its Paranoiac Critical ancestry.

It's this examination which I found so gratifying that I had to post it.

The need for the holes stems from Dali’s fixation on the “intrauterine paradise.” This notion was prevalent in many of his paintings, writings, sculptures, etc. He claimed to be able to recall colors and images from his career in the womb and drew, from that prenatal, but apparently not pre-artistic, period, his famous “eggs without pan” images...
A fundamental desire in Man, according to Dali, is to return to the womb, with its safety and utter lack of affectation. When bellybound, the fetus has no choice but to experience completely. The path that the fetus takes to enter the world, an ignoble and abrupt descent through the birth canal, is responsible for a mass of human discomfort and unhappiness. How can one be expected to function with complete ease in any environment with which one is unfamiliar, and into which one is simply ejected?

What's amazing is that this is essentially an artistic intuition for Dali but it's been scientifically confirmed in the works of Stanislav Grof and his perinatal matrices. But that's a topic for another day.


Man, seeking to regain the composure of the intrauterine paradise, endeavors to recreate the experiences therein in a number of ways. Those germane to this discussion mimic the actual descent into the maelstrom. The most common is sleep. When dreaming, one may operate relatively free of the stresses imposed by the actual environment. Sleep is, in this way, an analog of the womb. This notion is not new, of course. It is treated visually by Dali in his painting “Mask of Sleep.” The figure in the picture is a woefully distorted and distended human face, attached to a vanishingly small body. The dozing head is held aloft by a series of crutches, another of Dali’s fetish objects. We recognize then, that the comfort of sleep is imperfect, for the danger of the fall is still present, and perhaps unavoidable.
Some mimic the fall more literally. Dali considered the popularity of skydiving, particularly the fascination with W.W.I paratroopers, a result of the desire to address the nature of falling. By falling from a high place, one might not only examine the fall, but face the consequences impact, generally resulting in the big sleep. (This is also a womb analog, albeit a more permanent and gruesome one.) These activities, however dangerous and confusing, were a means by which the individual could learn to cope with the world into which he had been cast. In the best of all possible worlds, the womb would be a more gracious host, allowing entry and exit at will, such that the child might return in times of confusion or trouble, until complete acclimation had been attained. The child, completely capable of interacting seamlessly with this new terrain would be spared the stress of the abrupt birth. The holes in the centaurs are these open wombs. Through them the young centaurs are able to learn about the world without having to live there full-time, and without the threat of impact—like parachutes, only safer.