The Splendor of Salvador Dali, the Catalonian Mindbender

My massive Portrait post, one part of it at least, was mentioned on the blog for the James Joyce Quarterly the other day and now I'm organizing that little Dali-Joyce section of it into a mini-essay to submit to their offices for possible publication. I am thrilled about that and also a little nervous.

I haven't had anything published before and it's something I've been striving to achieve for a while now. The possibility has clearly been made open. Just have to submit something that's good enough.

So I've been going through my books and some of my old writings trying to gather ideas or little things to possibly add in to the Joyce and Dali piece and I've realized that, while I am a huge fan of Salvador Dali (he is my favorite painter, although admittedly I've had relatively little exposure to the wide world of painters), that aforementioned Portrait post with its reference to Dali's Temptation of St. Anthony was the first time I've mentioned the great Surrealist Spaniard on this blog. And so I'd like to display some of my favorite work of his and talk some Dali at ya.

I was introduced to Dali's work during a visit to the University of North Carolina in Chapel Hill to see my longtime friend Raphe whose basement bedroom prominently displayed a poster of The Metamorphosis of Narcissus. I was blown away by it, completely absorbed in its splendor for the entire weekend, and have been a supremely fascinated Dali enthusiast ever since. Here is that painting: 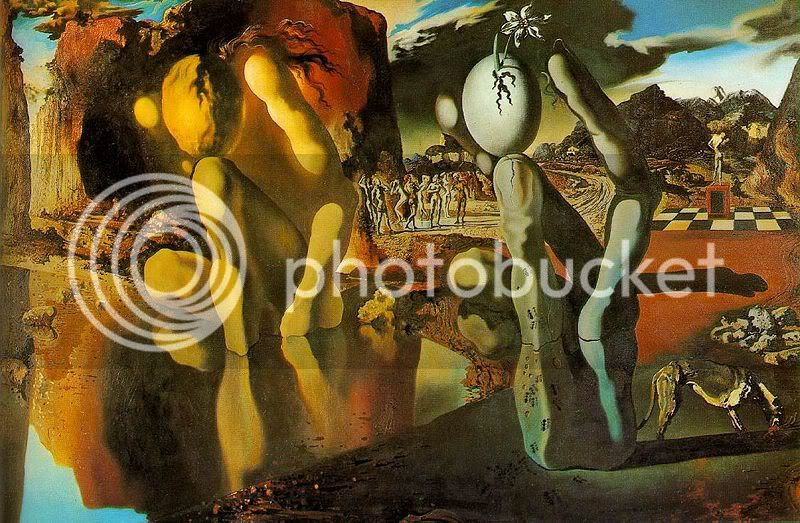 And a few of my other favorites of his... 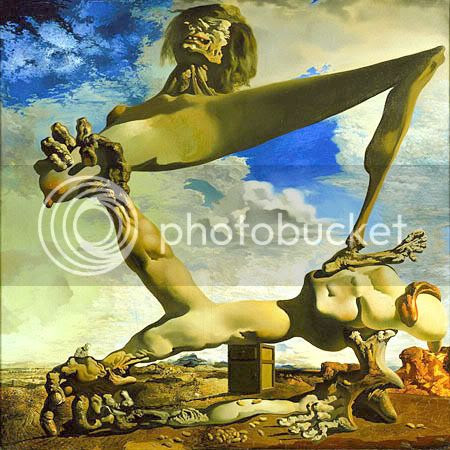 He has the ability to paint a scene of immense size, like a scene in a major movie, and then fill it with the most unusual mutations and combinations that are always striking for their meanings and the chosen form of communicating of those meanings. We see a body completely broken apart and in an absolutely horrifically scrambled state, the feeling of someone at war with himself. The chest with cabinet and drawers is a common element in Dali's work representing the cupboards of thoughts in which we gather and sometimes hide or forget about things throughout our lifetime.

His most recognized painting is definitely The Persistence of Memory (1931) although it's not nearly his best. 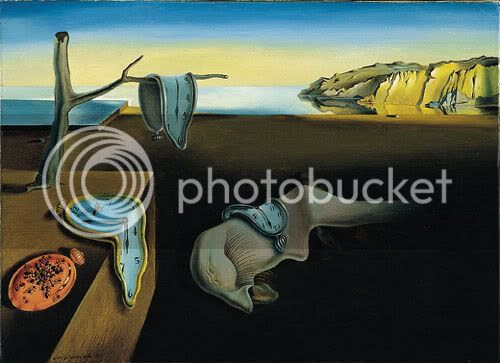 I first saw this in a video of a Joseph Campbell lecture that used to be on YouTube a few years ago but now solely exists on the DVD set called Mythos (scratch that: I think I found it here), a collection of lectures which is definitely worthwhile if you're into that stuff. He brings up this painting in discussion of the timeless realm of dreams and the unconscious (I believe the lecture is on Jung and the psyche). "The unconscious doesn't know anything about this," he says, referring to the clocks melting. This landscape is what I call a dreamscape, a depiction of the background desert of the unconscious (or the 'subconscious' as it's more popularly called---Freud called it the "subconscious", Jung called it in the "unconscious" and the former has stuck in the popular lingo but either one makes sense: it's a consciousness that is essentially below and underlying your everyday waking consciousness and something you are consciously unaware of. You with me?).

The same landscape appears in another Dali painting Campbell comments on it that lecture (in which he fluidly recites its lengthy title): 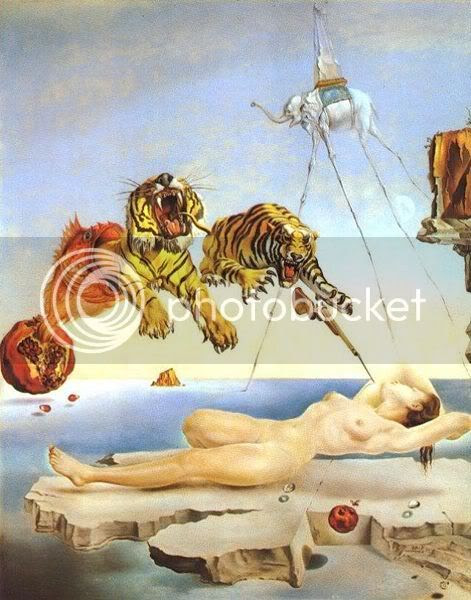 It reminds me now of an exaggerated, highly creative and colorful version of the "kick" one experiences inside a dream in the film Inception. And we also see here another recurring Dali theme: that obelisk-carrying elephant on stilts. Here it even seems to be smiling. Those needlefooted elephants are most prominent in the Temptation of St. Anthony painting which I analyzed a few weeks ago.

He's also got a gift for the mind-benders. Those visual trick images that can be any of a few different things at once. Like this:

The Slave Market with the Disappearing Bust of Voltaire (1940) 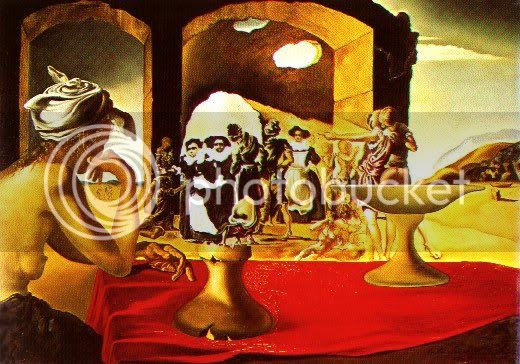 The technique is called trompe l'oeil (French: 'deceive the eye') and Dali has a few great examples of it (another favorite artist of mine, M.C. Escher, also used it with awesome effect). 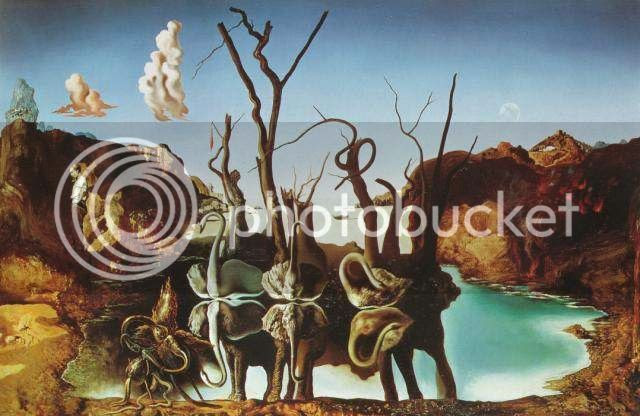 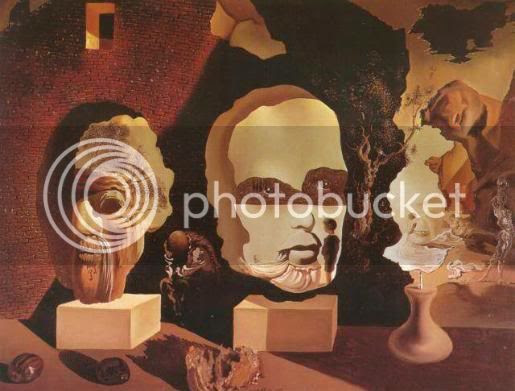 I've mostly shown works from the 1940s thus far but his archives are immense and span eight decades while his style grows and evolves through each one. Plenty of Freud and Jung stuff in the early part of his career and then, after the dropping of the atomic bomb in 1945, Dali's perspective on things (and thus the depictions in his art) totally changed. Luckily for us, Dali was a writer (though a whimsically eccentric one) as well as a painter and he explained his conversion clearly:

"The explosion of the atomic bomb on 6 August 1945 sent a seismic shock through me. Since then, the atom has been central to my thinking. Many of the scenes I have painted in this period express the immense fear that took hold of me when I heard of the explosion of the bomb. I used my paranoiac-critical method to analyse the world. I want to perceive and understand the hidden powers and laws of things, in order to have them in my power. A brilliant inspiration shows me that I have an unusual weapon at my disposal to help me penetrate to the core of reality: mysticism---that is to say, the profound intuitive knowledge of what is, direct communication with the all, absolute vision by the grace of Truth, by the grace of God. More powerful than cyclotrons and cybernetic calculators, I can penetrate to the mysteries of the real in a moment...

"In this state of intense prophecy it became clear to me that means of pictorial expression achieved their greatest perfection and effectiveness in the Renaissance, and that the decadence of modern painting was a consequence of scepticism and lack of faith, the result of mechanistic materialism. By reviving Spanish mysticism I, Dali, shall use my work to demonstrate the unity of the universe, by showing the spirituality of all substance." from Dali by Robert Descharnes

So now we see his paintings start to change, much more religious symbolism involved but it's combined with a strong emphasis on the world seen through the eyes of modern physics (which is very similar to Joyce's major works). 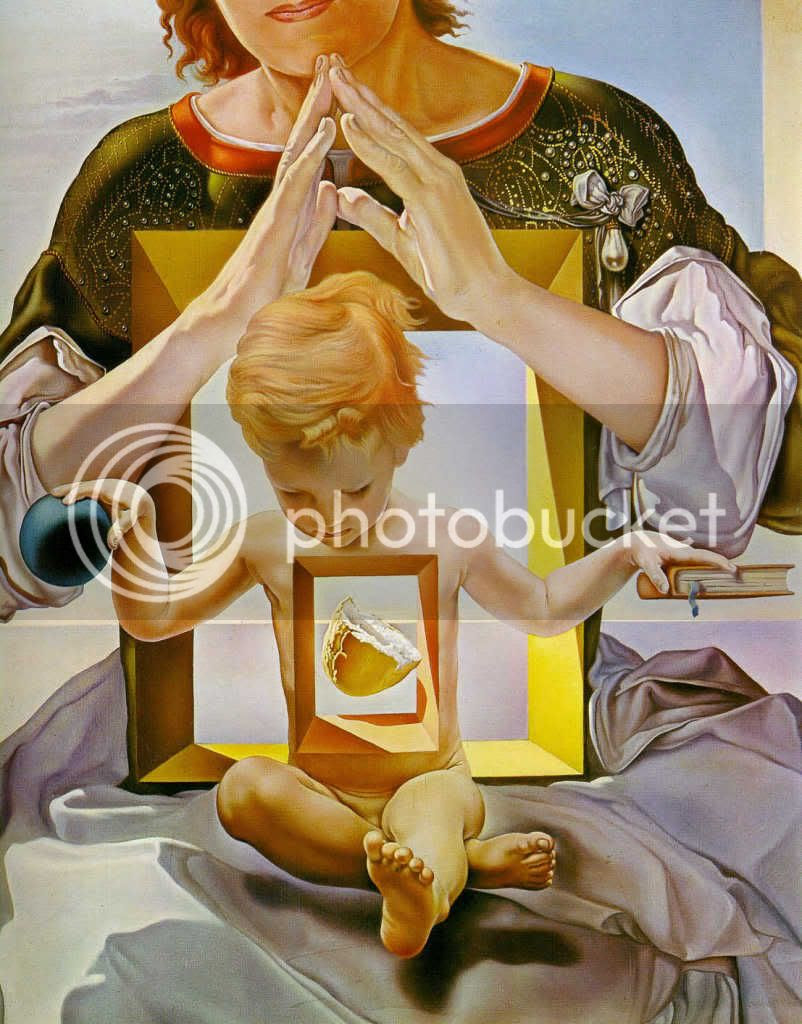 That one's a favorite of mine. Here's a few more... 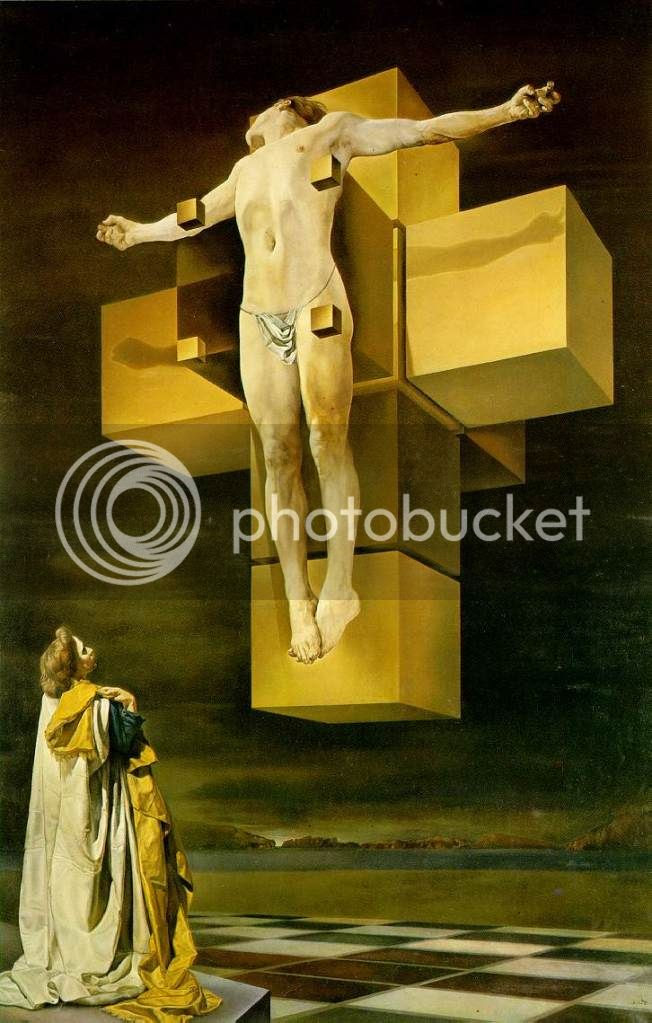 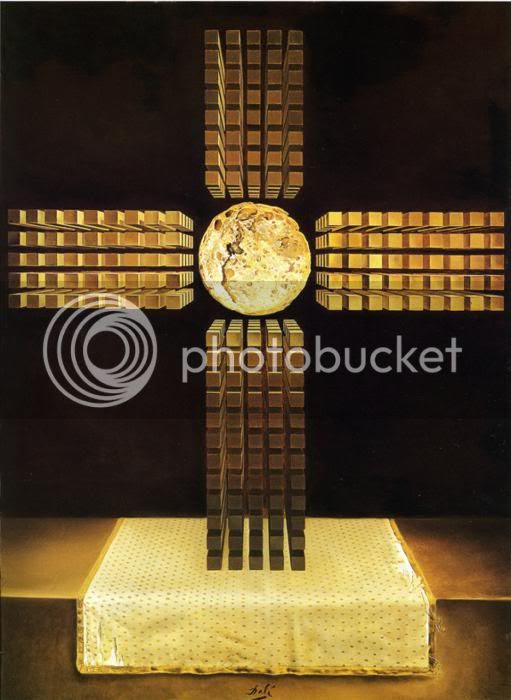 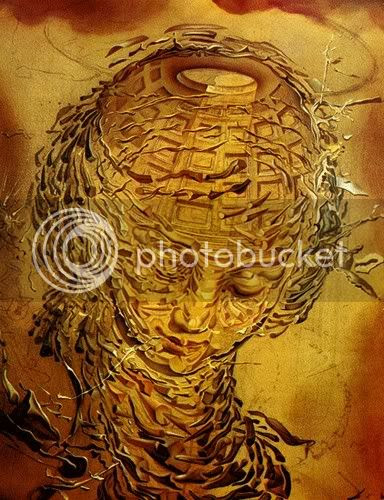 In the 60s he started taking things to a whole new level. 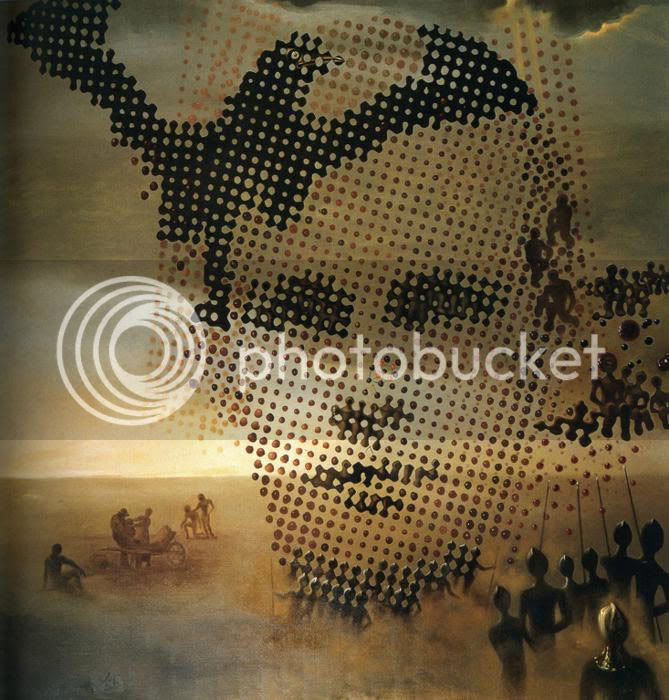 I think I've shown and said more than enough for now and I really haven't even scratched the surface. He has just an absurdly huge amount of art out there, one could easily make a blog entirely about Dali and I'm sure many people have. I highly recommend checking his works out and you can look forward to seeing more of it here as I will continue to occasionally draw upon them in my writings for this blog.
Posted by PQ at 12:34 AM