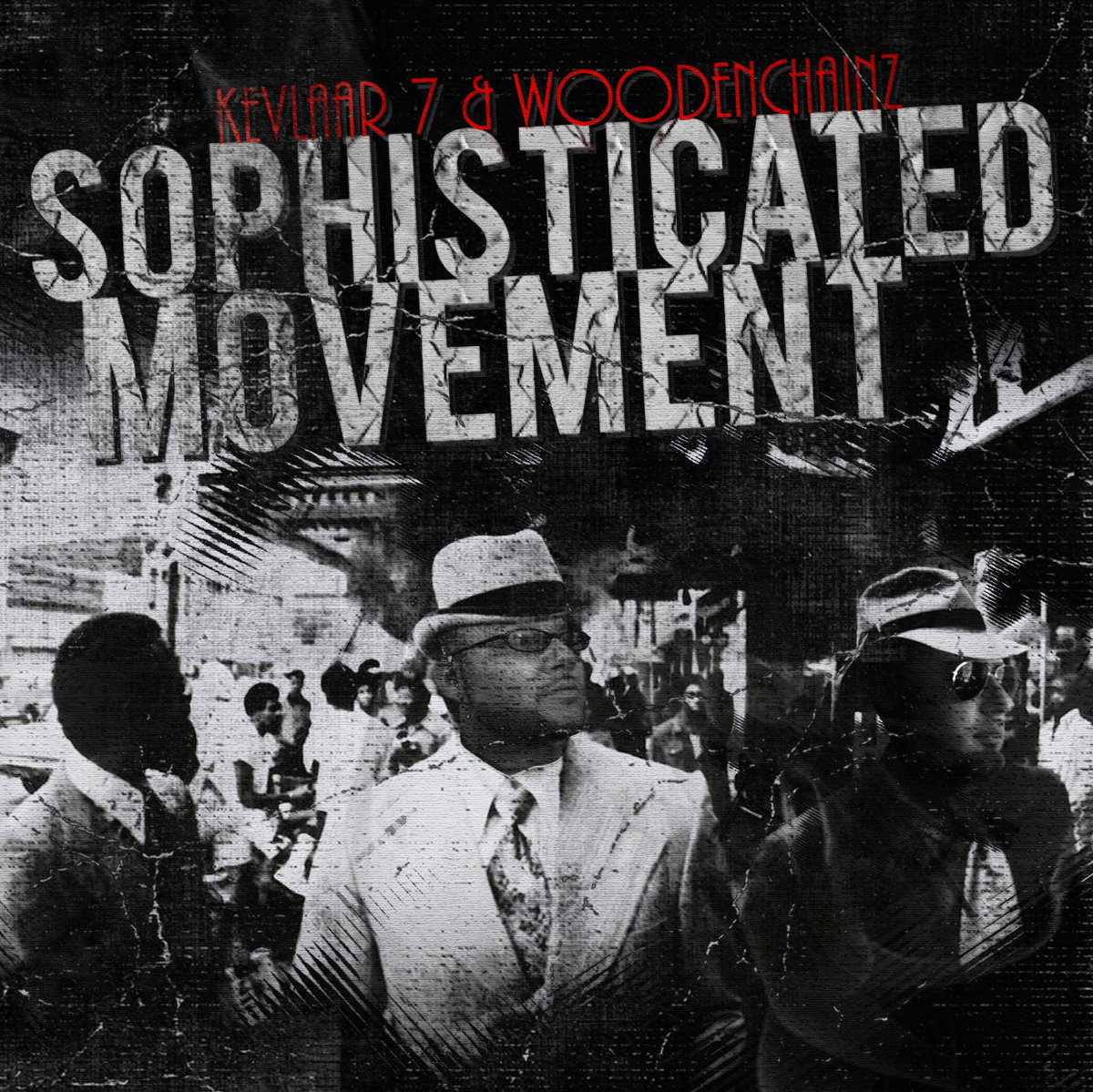 "My vinyl voice so vintage, hear the *crackling* and the *clicking*"
- Kevlaar 7

With three high-quality releases in less than two years, Kevlaar 7 is arguably the most consistent purveyor of pure hip hop right now. This latest offering, Sophisticated Movement, is a 15-track collaboration with burgeoning beatcrafter Woodenchainz, an album bursting at the seams with soulfulness as the sounds of decrepit Detroit's underground hip hop/blues heart continues to pour out from the Wisemen camp.


As one song's spoken intro declares, "Ain't no new Motown... We ain't went nowhere, ya dig that?" It's as though we're being treated with rugged lyrical rap straight from the same soulful geographical artery that poured out decades worth of blues and soul. The cover image of Kevlaar and Woodenchainz popping up in a 50s-60s era photograph like Jack Torrance at the end of The Shining attests (somewhat humorously) to their carrying forth that musical legacy.

In a recent television interview, Dr. Cornel West was asked about the legacy of America's positive influence worldwide and he responded by highlighting the importance of jazz and blues. When the TV person mockingly smiled and asked "aside from jazz and blues" what the legacy was, West retorted strongly "that's Martin Luther King, that's the legacy... Jazz and blues are about dealing with catastrophe... in the form of compassion for poor and working people." With that important point in mind, we can understand the message of this album, in which Kevlaar raps at one point, "Now I treat the hopeless/ with unadulterated dopeness."

This album positively gushes with evocative choral croons, sampled vocal moans, sonically atmospheric strings, and crashing drum loops. At the forefront of it all, though, is a sharp, melodic, densely thoughtful lyricism courtesy of verbal witchdoctor Kevlaar 7. His style of delivering verbal visuals is an entirely unique one; stimulating wordplay and rhymes that are drawn with the contours of an abstract painting, "my bars laced with opaqueness" as he puts it. The rhythms of this "inundated rhetoric" tend to resonate in the mind long before the multiple conveyed meanings begin to reveal themselves. This effect is by design, the intent being to enlighten those in the dark:

Above all, Kevlaar's self-described "spoken pictures hanging" just sound good, the unorthodox wordplay a mental treat that, when in union with Woodenchainz' roaring samples and crashing drums, often makes for hip hop ecstasy. The beats follow a classic formula (soul samples and hard drums) that, unfortunately, is so often rendered by contemporary producers in a flat, formulaic fashion but which here sounds refreshingly visceral and heartfelt. Most of the record has a grainy vinyl feel to it, nothing sounds computerized or digital. Though the dragging title track and psychedelic instrumental meandering on "Ask About Me" move at a pace that can send the listener astray, the rest of the record thumps with defined intensity. Even the interludes (audio collages of quotes and clips mixed with instrumentals) have a strong pulse, becoming essential to the album experience.

While two of the best tracks ("We Ain't Gonna Die" and "A New Day") are actually almost entirely devoid of drums, 'Chainz proves a percussion master, his clanky jangling drum patterns and thick bass lines can be spellbinding. The height of this is "Life's on the Clock" with its neck-snapping snares while the spectral screams on "Detroit's Agony" are stitched together by a mean percussive loop that harkens back to early Gravediggaz beats. "Boulevard Article 2" is, like its predecessor, a knocking street anthem made for boom-boxes and Kevlaar brings a colorful palette to it, spitting memorable lines like "Write rhymes in a mirror/ Reflect the interior." On "Why", the reverberating chorus of pleading voices expands an enveloping soundscape of emotion while a thick bassline and cracking snare march the song on its way (sadly, the track only features one verse before an interlude kicks in).

The album reaches its climax on the solemn "We Ain't Gonna Die". A twanging slide guitar melody, deeply resonant bassline, and hi-hats sounding like bouncing boot spurs are all that's needed to create the record's most moving instrumental experience. The bridge features a sampled choral wail of "I ain't gonna die! Nooo, we ain't gonna die!" that creates the image of chained prisoners or slaves marching together chanting hymns. Kevlaar's two verses are superb, most impressively in the transition from the first verse to the second where he carries not only the same imagery but even the same end rhyme. The first verse finishes with:

before the light flickers on in verse two:

"Burning candles shine slow inside the tenements/
Hieroglyphics scripted, our graffiti's prolific/
exquisite, sublime/ step inside the dimness/
David the Sun has come/ I came as fulfillment"

The concluding note to the record, "A New Day", is a unique musical experience, portraying the overall feel of waking up in the morning, barely past the veil of sleep where "endless dreams bend reality like clay." The beat is nothing more than a beautiful, gently lilting female voice with an echoing background, while Kevlaar shares his poetics in a spoken word fashion. The space occupied by that boundary between sleep and wakefulness is ripe with symbolism and importance, and Kevlaar's meditation on this moment provides powerful insight:

"The night is crucially beautiful
when hope flies the sky's plentiful, but resentful
distinguished by a lack of vision/ but hold on, it's not a prison
It's just a wall/ soliciting ambition to make it fall
Determination is a sacred gift from the universe/ to overcome the odds of stagnation"

The emcee-producer collaboration album has seen a revival lately and this soulful banger has to be counted among the best to drop these past few years. Recorded with both parties in the studio working together in person, there's a discernible cohesive chemistry that many modern rap records lack. Above all, the nuanced lyricism stretched out over a landscape of soul-drenched instrumentals make for a record that will likely remain sounding fresh ten years from now. This being his second underground classic released already in 2012, Kevlaar 7 has quickly become one of the best kept secrets in hip hop.
Posted by PQ at 4:11 PM