Story #2: As this one involves a human victim, its a bit scarier and more disgusting. During dinner on Sunday night, my girlfriend relayed to me the story of how her co-worker (let's call her Brenda) and her girlfriend were attacked in broad daylight here in Austin just recently. One might conclude that it was a violent hate crime perpetrated on two lesbians but the circumstances seem to paint the attacker as a maniac eager to do damage to any random person he came across that he didn't like.

Brenda and her girlfriend were riding bikes together one afternoon when they noticed a jogger fast approaching them from the opposite direction. Brenda signaled that they should get over into the street and then did so, but her friend didn't receive the message. Suddenly the oncoming jogger smashed Brenda's friend with a full body check, knocking her off her bike. When she started to get up he ran and knocked her down again. Before she knew it, he'd pulled out a paring knife and began violently slashing at her.

The assailant struck a number of gashes upon her, leaving her a bloodied mess. She would need multiple stitches and staples to close up the slices on her hands. I know nothing more about the event, but somehow they managed to get away or perhaps somebody stepped in to save her. We can only hope the violent aggressor got caught and will be punished to the full extent of the law.

Hearing this, I was absolutely disgusted and appalled at humanity's potential for evil. Man is indeed, as Nietzsche called him, the sick animal. 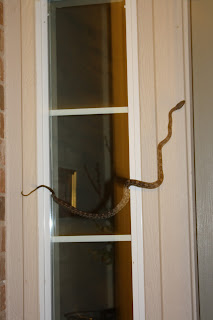 Story #3: When I got into work on Monday morning I had an e-mail from my co-worker titled "Look mom, no hands!" Attached were four pictures showing something I did not know was even possible. A rat snake had crawled up the side of his (my co-worker's) house in pursuit of a bird's nest.

He promptly removed it with a hockey stick and let it slither off into a bush somewhere but, sure enough, the next morning there it was again vertically crawling up the wall in pursuit of some tasty bird eggs.

I'd never known snakes could climb walls. This just adds a whole new element to how scary they can be. It's funny that the encounter happened when it did because I had been talking a lot at work lately about wild snakes and how I hadn't yet experienced one. I'd wondered if everybody else in the office, having lived in Texas for a while, had encountered these creepy reptiles in the wild before.

Here's a video of a snake climbing up a brick wall which is exactly what this sucker was doing on that second morning.


Story #4: It's been raining pretty heavily here in Austin for about a week now. Thunder is rumbling outside as I type this. Last Saturday night, seemingly out of nowhere after weeks of dry weather, a massive thunderstorm blasted the city. I've never heard thunder cracks as loud as the ones that exploded above my roof that night.

There was also plenty of lightning. Monday morning I surveyed my co-workers to see what their experiences of the storm were like. Brandon, the same guy who encountered the snake, took on a grim tone and told me that his neighbor's house had been struck by lightning and the second floor of their home was burnt to ashes. Luckily, they managed to get out in plenty of time but I imagine it must have been pretty horrific to have to escape their burning home at 3 AM in the middle of a torrential downpour with thunder and lightning.

It's clear that there's a connecting thread between all of these. They're all quite violent, for one thing. I will let the reader soak it all in and make their own determinations, though.
Posted by PQ at 10:35 PM

Email ThisBlogThis!Share to TwitterShare to FacebookShare to Pinterest
Labels: random