It is not very often that I shell out the cash for a brand new book. Most of the books I read are worn-out, tattered pre-owned texts that I buy as cheaply as possible either online or from one of Austin's many wonderful used bookstores (the Half Priced Books chain is one of my favorite things about this city). Whenever I do opt to purchase a brand new book it's usually something that has just been released (like the Baseball Prospectus annual which I always need to have as soon as it drops) or something so special that I couldn't resist paying full price.

In the early stages of my addiction to reading Robert Anton Wilson's work, I couldn't resist snatching up a fresh copy of his book The Illuminati Papers from a local New Age bookstore. Many months and re-readings later, I'm very happy with my decision. After quickly zipping through six different RAW books, this is definitely one of my favorites. 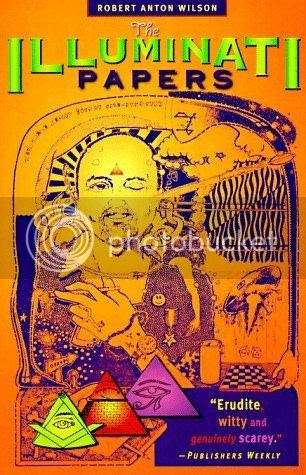 Illuminati Papers (1997 edition, published by Ronin) is certainly one of his nicer looking books physically; the cover is a bright neon orange with a rendering of one of the full-page illustrations from Cosmic Trigger showing a cartoon face of the author winking with one eye while a motley of symbols and spaceships dances around him, with the outstretched body of the Egyptian goddess Nuit surrounding it all. It's wider than a normal paperback and reminds me of a small graphic novel.

The book is a collection of essays, interview excerpts, and short pieces presented in a newspaper-style fashion with big headlines announcing the title of each piece and the text appearing in narrow columns. Pictures, diagrams, and sketchings are strewn throughout. Originally published in 1980, this work serves as a perfect companion text to Prometheus Rising (published three years afterwards, though originally written in the 70s) because here RAW uses the model of eight neurological circuits developed in Prometheus and applies it to everything from Stanley Kubrick's movies to the problem of poverty in a capitalist society. In this rather diverse compendium of pieces, the 8-circuit brain model really seems to be the connecting thread.*

*I've written a little about the eight circuit model once before, there are also plenty of online sources that explain it. The first four circuits are those that are socially imprinted upon us starting from birth, the latter four are higher functions of the brain that are able to re-program the first four through practices like yoga or deep meditation.

What initially sold me on the book is that it contains pieces devoted to artists like James Joyce, Ezra Pound, Beethoven, Raymond Chandler, and others. Pound had always seemed intriguing whenever RAW would mention him in passing but after reading the excellent little piece in this volume entitled "The Goddess of Ezra Pound," I'm now very interested in checking out the work of ol' Ez for myself (especially The Cantos). The same goes for legendary American crime novelist Raymond Chandler about whom RAW writes, "the emotional impact of Chandler's books lies in something that critics have not widely discussed: his capacity to render physiological sensations (neurological nuances) which most writers have avoided as being totally beyond words. Chandler found the words."

The piece on Joyce and Finnegans Wake is also quite interesting in that, other than his Joyce-heavy book Coincidance (and an older essay that appears in his book Email to the Universe), this is the only time I've seen Wilson write about Joyce at length. As expected, he brings a unique perspective to the table, summoning one of my favorite psychologists: "There are many good literary studies of Joyce, but the best introduction to Finnegans Wake is probably Stanislaus Grof's Realms of the Human Unconscious, a study of the head spaces experienced under LSD." (Either Wilson or the editor spelled Dr. Grof's name wrong---it's Stanislav Grof---but that's beside the point.) Grof uses the term "coex systems" to describe the clusters of memories/sensations/experiences we encounter within the deep psyche (coex means condensed experience) and this, RAW argues, is exactly what Joyce presents in Finnegans Wake where each phrase condenses multiple allusions, references, and experiences at once. As RAW puts it, "Joyce was a quantum jump ahead of the psychology of his time" which is why attempts to analyze his work through the lens of Freud or Jung are inadequate. He concludes that "Finnegans Wake is not just a great novel and a semantic symphony; it contains a whole science of psychoarchaelogy and historical neurolinguistics." Amen.

As fun as it is to get RAW's drawn-out thoughts on his favorite artists, I felt that the essays on economics were some of the most striking pieces in the book. These came across as perfect examples of what RAW often said his work is about: brain change through "guerilla ontology." He is a master of thinking outside the box while still using the sharpest and most precise tools of knowledge to make the reader think. Two of these pieces especially managed to shock me into a fresh way of thinking.

The essay entitled "Neuroeconomics" deals with the problem of poverty in capitalist society where, RAW explains, "money equals security and lack of money equals insecurity." He uses William S. Burroughs' analogy of a heroin addict: the junkie must have regular doses just as "the capitalist citizen must have a regular money fix" and we go through the same withdrawal as a junkie whenever our "fix" is not available. That's why there's such a mass anxiety in this country: we're all made to be "money mad." RAW links this with the so-called biosurvival circuit, the early imprint of the nurturing mother---without money we have separation anxiety, the same as a junkie without his heroin and once he gets his fix, it's a state of infantile bliss. This creates a prevalence of "chronic low-grade paranoia"  that our external source of biosurvival security might be cut off. Everybody, even rich people, can't help but be anxious and worried about money. The piece goes deeper into things, including an analysis of the welfare system and the experience of poverty in America as opposed to the rest of the world.

Along these same lines is a piece called "The RICH Economy" whose ideas reminded me of an audio interview featuring Wilson and his brilliant wife Arlen in which they posit shocking and thought-provoking solutions to some of humanity's problems (the interview is called "Gonzo Sociology" and you can check it out here). Here the oft-blabbered-upon issue of unemployment is tackled soberly, as RAW quite bluntly states that "I don't think there is, or ever again can be, a cure for unemployment. I propose that unemployment is not a disease, but the natural, healthy functioning of an advanced technological society." Calling upon the ideas of genius engineer Buckminster Fuller he quickly makes it clear that a rapidly advancing technology inevitably leads to fewer jobs as the technology can "do more with less." With that out of the way, he completely flips the switch so as to examine what real solutions might be available:


Let us regard wage-work---as most people do, in fact, regard it---as a curse, a drag, a nuisance, a barrier that stands between us and what we really want to do. In that case, your job is the disease, and unemployment is the cure.
"But without working for wages we'll all starve to death!?! Won't we?"
Not at all. Many farseeing social thinkers have suggested intelligent and plausible plans for adapting to a society of rising unemployment.

He proceeds to outline some examples such as Robert Theobald's Guaranteed Annual Income or Nobel Prize winner Milton Friedman's Negative Income Tax that sound stunningly logical, especially in the face of the mental sewage being vociferously presented by our current presidential candidates. The final example is "The RICH Economy" with RICH an acronym for Rising Income through Cybernetic Homeostasis. This idea encompasses the ones already mentioned while also encouraging unemployment by offering people financial rewards for designing machines that can replace the work of humans. Of course, this sounds ridiculous but you're forgetting that the goal is to cure the disease of wage-work. The final stage of the RICH Economy is to massively invest in adult education since, if everything goes right, so many adults will be unemployed and have nothing to do with themselves. The purpose of this would be to foster their creative potential because, as he concludes,


the first thought of people, once they are delivered from wage slavery, will be, "What was it I was so interested in as a youth, before I was told I had to earn a living?" The answer to that question, coming from millions and then billions of persons liberated from mechanical toil, will make the Renaissance look like a high school science fair or a Greenwich Village art show.

(You can read the full essay online here.)

Despite the title, the book doesn't really deal with the Illuminati very much at all. In fact, it wouldn't surprise me if it were just a marketing gimmick because RAW's name, at the time this book was published, was essentially synonymous with the Illuminati because of the popularity of his Illuminatus! trilogy (written with Robert Shea). The interview excerpts, most of which are excellent, do contain some conspiracy and Illuminati material but otherwise it does all seem like a marketing facade or perhaps satire.*

A brilliant and mind-blowing example of this kind of Illuminati satire is a piece that is essentially a report written by someone in the Sirius star system section of the Illuminati reporting to "Galactic Central" about how "the domesticated primates of Terra" have been slowly advancing ever since these intergalactic beings introduced the deeply neurological game of chess. He proceeds to thoroughly breakdown the chessboard and the game of chess as a device specifically designed to lead one upwards along the 8-circuit neurological scale. This piece, and another essay entitled "The Science of Godmanship," were so brilliant that they caused me to burst out in vocal shock while reading them. It suffices to say, RAW is a magician with words.

For anyone interested in reading Robert Anton Wilson or even just a funny, intelligent book, this would be a great place to start. Even if you're a RAW devotee, if you haven't picked this one up, I consider it essential. As I mentioned, it goes perfectly with Prometheus Rising. The wit and liquid prose are present as always, and the incorrigible optimism is especially prevalent. In our current harrowing global situation, RAW has the solution: "The evils of the world... challenge us to use our heads better" and that is what this book is all about.

*Many of the essays have bylines showing the name of characters from the Illuminatus! novels but, the more one learns about RAW, the more clear it becomes that these are all written by him. Again, I wouldn't be surprised if those bylines were a late addition. (They seem pretty convoluted if you ask me.)
Posted by PQ at 9:57 PM