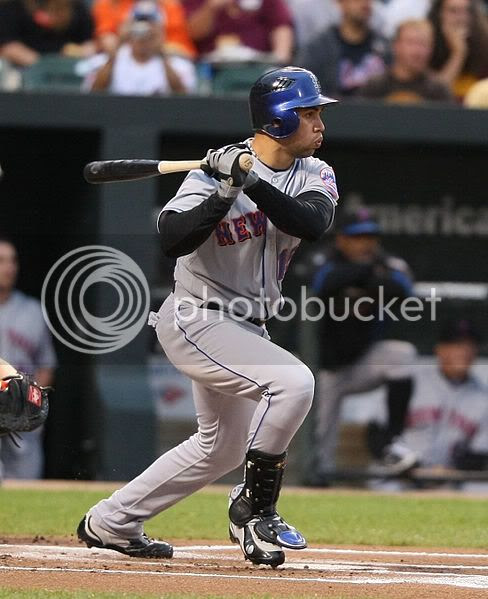 His final game in a Mets uniform was a typical Carlos Beltran performance. Two walks, a single, an RBI, and 3 runs scored. He went out in perfect Beltran fashion with a strong all-around game that a pessimistic eye would be blind to. That's how he always went about his business throughout his seven year Mets career and, sadly, during that time many Mets fans adopted the unfairly critical perspective of their Bronx neighbors. "They act like they own you," he would later comment.

After the Mets signed Beltran to a monstrous 7-year $119 million contract (the largest in Mets history) before the 2005 season, the fans had every reason to expect big things from him but the normally shy and reserved centerfielder seemed to wilt underneath the massive New York City sports spotlight. He had a poor year by his own standards, hitting just .266/.330/.414 with 17 homeruns for a Mets team that underachieved and finished in third place. The fans weren't happy.

Everything would change in the next season as the Mets loaded up in preparation for a run at a title. They brought in Beltran's friend and fellow countryman Carlos Delgado and this certainly seemed to benefit Beltran as he went on to have arguably the greatest offensive season in Mets history. He hit .275/.388/.594 with 95 walks and a team-record 41 homeruns as the Mets went all the way to the National League championship.

It was during that season that I attended more Mets games at Shea Stadium than ever before, I saw probably 15 or 16 regular season games and even went to Game 2 of the NLCS against the Cardinals (wrote about it here). I fondly remember Beltran running down any fly ball that was hit in his vicinity with a long-striding graceful gait that was nevertheless an image of peak athletic performance. During one game against the Angels I saw him not only chase down a ball that was smashed but he even reached up above the tall Shea Stadium fence and stole a homerun. It was one of the best catches I'd ever witnessed in person.

A seemingly perfect player, he became my favorite on the team because of his all-around talent and consistency. David Wright was terrific but he was prone to frustrating lapses in the field, Jose Reyes was as exciting as anybody in the sport but could have some terrible at-bats in those days. Beltran, on the other hand, was the kind of player you'd create in a video game---he had speed, big-time power, a good batting eye, hit the ball all over the field from both sides of the plate, and played a superb center field.

In the '06 NLCS against the Cardinals, Beltran and Delgado carried the team (Beltran scored 8 runs and hit 3 homers) and they battled all the way to a deciding Game 7 at Shea. That was an unforgettable night for me as I know it was for all Mets fans. I'll always remember where I was. I watched the beginning of the game in my kitchen and saw Endy Chavez's legendary catch right as I stepped out the door to join my brother's future wife and her friend for a few drinks at a bar in Brooklyn. The bar was absolutely packed and I hated it, you couldn't walk anywhere without squeezing in between a crowd of inconsiderate people. The game was on TV but not enough people seemed to care. The teams were locked in a 1-1 tie and as it reached the 9th inning, everybody suddenly started paying attention. For a reason I can't fathom now in retrospect, the Mets didn't put their best reliever in the game but went instead with Aaron Heilman who promptly allowed a two-run homerun to the Cards' worst hitter, Yadier Molina.

The Mets went into their final at-bat needing two runs to keep their season alive. They would face rookie pitcher Adam Wainwright. The first two hitters got on base and I can remember that incredible feeling of hope, a particular brand of which seems to be unique to baseball. The tying runs were on base, the opportunity to tie the game existed. But Wainwright was composed amidst the chaotic Shea Stadium scene and retired the next two hitters. My least favorite Met player Paul LoDuca worked a walk and the bases were loaded for the team's best hitter, Carlos Beltran, with a trip to the World Series on the line.

Wainwright threw two fastballs and got two quick strikes on Beltran. The next pitch would live in infamy. Wainwright twirled an absolutely perfect, knee-buckling curveball that started around the height of Beltran's head and promptly dropped down to knee-level for a called strike three. Beltran was fooled by it, couldn't muster a swing, and the game was over. The Cardinals went to the World Series and eventually won the title, defeating the Detroit Tigers. Beltran, for all his subsequent accomplishments, was never forgiven by most Mets fans for not swinging the bat. My dad still brings it up. As I watched it in the bar, I didn't scream or stomp my feet in anger I simply exhaled "fuck..." and felt the same helpless feeling that Beltran must have had. It was an impossible pitch to hit. Wainwright had won the battle fair and square and there was nothing the Mets could do about it.

It should be noted that, despite that memory of Beltran being fooled by a perfect curveball being burned into everyone's minds, that's not why they lost. They were already trailing by 2 and down to their final out, none of that was Beltran's fault. He'd even scored the team's only run in that game. I blamed all the Mets' failures on inept manager Willie Randolph in those days and while the arguments I used to make have faded from my memory over the years, I still think it's safe to say that Randolph's poorly informed decisions are to blame for the Mets not going all the way.

Beltran didn't let the memory of his strikeout get to him as he went on to post another two huge seasons for the Mets, but in both of those years (2007, 2008) the team collapsed down the stretch and never got back to the playoffs again. Again, Beltran was not the one to blame. In both of those seasons, he put up huge numbers in the final month while the rest of the team faltered. He especially turned it on in the closing month of 2008, hitting .344/.440/.645 in September as the Mets desperately tried to save their season in the final days of Shea Stadium's existence.

These past few years he battled knee problems, had surgery, and missed a lot of games but still hit well in the games he did play. This year he was putting up big numbers again (leading the league in extra-base hits) while playing in right field to give his knees a break, but with his contract expiring he became expendable. He was traded to San Francisco on Wednesday.

I'm sorry to see him go but it's comforting that he's going to a great baseball city where he'll be appreciated for what he brings to the table. He also gets a chance at defending a World Series title so I'll probably be rooting for the Giants the rest of the year with him in the mix. As I learned in my last trip to San Francisco, the love those people show for their team, even through hard times, is enough to make me want to root for them (despite my distaste for their general manager, Brian Sabean).

Jay Jaffe at Baseball Prospectus wrote a nice piece the other day looking at Beltran's performance as a Met, showing that he was actually among the top 5 most productive outfielders in baseball during that time. Nevertheless, he remains under-appreciated by most Mets fans and some still hold the 2006 strikeout against him as his defining moment, conveniently ignoring that Beltran leaves the Mets with numbers that compare favorably to Mike Piazza's output during his time in Queens. Looking at the list of top Mets career performances, Beltran ranks in the franchise's top 10 for on-base percentage, slugging, runs scored, doubles, homeruns, RBI, walks, OPS+, and anything else important.

The guy simply had a great career as a New York Met. I will always remember him for his whip-like swing and the homeruns he crushed (so many of them at crucial moments), the fly balls he ran down, and the way he made it all look so easy. It's a shame that he missed so much time during the two seasons prior, but I see it as representative of the Mets overall organizational decrepitude of that time. His rejuvenation this year coincided with a rejuvenation of the Mets franchise under new management and I'm glad we got to see him go out at the peak of his powers and I wish him all the best in San Francisco.
Posted by PQ at 11:35 PM