In my predictions for hockey's "Super Sunday," I chose Russia to beat team Czech because of "the Ovechkin Factor" and boy was I right: 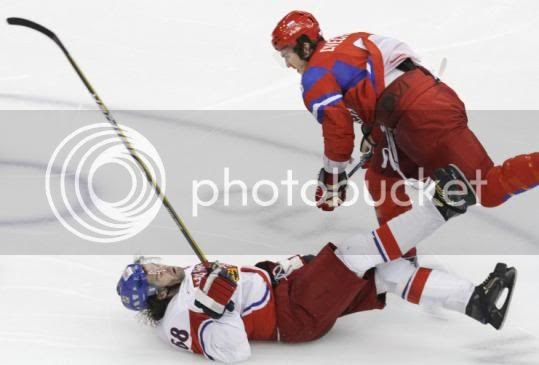 The score was 2-1 in favor of the Russians when Jaromir Jagr, who's had a pretty exciting return to hockey in the United States so far, skated up the middle of the ice with the puck. He spotted a lurking Alexander Ovechkin and decided to turn back in the other direction and regroup, i.e. get the fuck away from Ovechkin. Instead, the scud-missile-on-skates prepared momentum, waiting for Jagr to try and cross into the Russian zone again and then absolutely annihilated him which set the puck loose and led directly to a Russian goal and a 3-1 score which put the game away.

Unfortunately, NBC showed the game on tape delay so most of the country (except those folks watching the game online) had to wait a couple hours before seeing it even though the result was all over the web. NBC screws up again.

The day's next match-up was one for the ages.

A young, underdog Team USA came out and jumped all over the heavily favored Canadian team and shakey goaltender Martin Brodeur. American defenseman Brain Rafalski threw a shot on net that tipped past Brodeur off of his own teammate's stick and, after Canada tied it at 1-1, Rafalski came right back and flicked a soft shot past Brodeur to regain the lead for the Americans. The remainder of the contest produced some of the best and most exciting hockey I have ever seen in my life. I likened it to an All-Star game in which the participants actually cared about the outcome and really gave it their all. It was pure hockey heaven as the two talent-laden squads absolutely pounded each other to a pulp.

In the third period, Jamie Langenbrunner scored on his Devils teammate Brodeur to make it 4-2 USA and Canada responded strongly. They put on a shooting gallery, taking aim at USA goalie Ryan Miller until finally Sidney Crosby tipped a soft one past him to make it 4-3 and then they really brought the heavy firepower. But Miller stopped everything. After Canada pulled their goalie for an extra attacker, Ryan Kesler put an emphatic cap on the thriller with a diving swipe that knocked the puck into a vacated Canadian net, 5-3 USA. In the end, the Canadians had outshot USA 45-23 but lost the game. It was the first time team USA had beaten Canada in Olympic play since 1960 and there was much chatter about this epic game matching the "Miracle on Ice" 1980 game which occurred exactly 30 years prior.

That's probably overstating it a bit, but it was still probably the best hockey game I've ever seen and it got the nation's sportswriters buzzing loudly and served to promote the great game of hockey in perfect fashion.

I'm writing this on Wednesday evening. Canada has rebounded from that disappointing loss to steamroll not only Germany but Russia too! Earlier today, USA won an exciting game against Switzerland in which Jonas Hiller almost single-handedly won the game for his team. If he could score goals he probably would have won the game for them. Team USA outshot the Swiss 44-19 and only scored one goal on Hiller. They put another one in on an empty net to seal the game 2-0 but Hiller really gave them a scare.

At the moment, the Czech Republic and Finland are battling in the third period of a scoreless game and neither looks to be letting up. This is a great match-up featuring two awesome goalies and I won't dare make a prediction. Okay, I will. Team Czech will win.

And Slovakia will upset Sweden tonight behind a huge game from Jaroslav Halak.
Posted by PQ at 10:54 PM