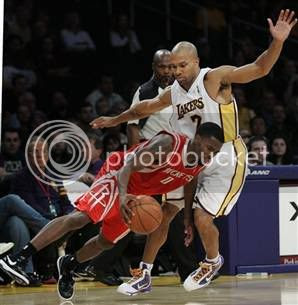 I had the opportunity to take in an entertaining basketball game last night. The defending champion  Lakers took on the Rockets of Houston at the Staples Center in a rematch of last year's playoff series which went a full seven games before the heavily favored Lakers escaped embarassment and knocked out the feisty Rockets. The series was memorable for Ron Artest's antics and elbowings of Kobe Bryant, getting under the superstar's skin at times but in the end only pissing him off enough to make him play better.
During the summer, the Rockets didn't attempt to re-sign Artest and he joined the Lakers while Los Angeles let budding young wingman Trevor Ariza (exactly 18 days older than I am) depart to the Rockets. The pregame talk focused on Ariza's return to LA and taking on his former team who won this season's first matchup between the teams on November 4th in Houston, 103-102 in overtime.
The Rockets won by ten, 101-91, and it didn't even seem that close.
Their leading scorer in the game was tiny unheralded pointguard Aaron Brooks (shown above defying physical laws) and their second leading scorer was this guy:

The Rockets' two best players, who occupy most of the team's payroll, are both out with injuries and the remaining roster is a collection of unheralded no-names like Australian import David Andersen (above) and a guy who looks like Conan O'Brien's cousin. Yet they keep on competing. They were absent Yao Ming and Tracy McGrady in last year's playoffs but still pushed the eventual-champion Lakers to a seventh game before bowing out.

The team is assembled by their savvy General Manager, Daryl Morey, an MIT grad and stats geek who applies advanced statistical analysis to pick up undervalued players and put together a roster that stresses team play over individual accomplishment. This is similar to the approach the Oakland A's became famous for throughout the last decade: using numbers to assemble a competitive team with undervalued players and scarce resources. Michael Lewis told their story in "Moneyball" and the rest of the league quickly adapted their strategies but, as Lewis tells the Rockets' story in a New York Times piece from earlier this year, he notes that Morey isn't about to reveal too much about what information they have and how they use it. They've devised unique ways to evaluate players and have assembled a pretty damn good team that way. At one point last season they won 22 consecutive games, the longest streak since the 1971-72 Lakers. And they did that without their highest-paid player.

I've tried to become a Rockets fan already once before. When they first acquired T-Mac he was one of my favorite players and, combining with Yao Ming, the team from Houston seemed like a strong force worthy of jumping behind and rooting for as they attempted to dethrone the West's established powerhouses (Lakers, Spurs). They were also a fun videogame team. But T-Mac kept getting injured and, when he played, he played like a wuss. It's hard to believe the same guy who once did this


was missing wide open dunks last year and letting opponents run past him with the ball.

Now, after watching this assemblage of unknowns take down the Lakers last night, I've officially become a fan. It's hard for me not to root for a team that uses an intelligent approach and constantly defies expectations. They're interesting to follow; every player they sign you wonder "Hm, I wonder what they see in him?"

The NYT Magazine article I linked to uses Shane Battier as the posterboy for their approach and I've seen this concept stressed now in numerous pieces about the Rockets and players like Battier: "the whole is greater than the sum of its parts." Battier has never had eye-popping individual numbers in any category (points, rebounds, assists) but his teams are ALWAYS better when he plays. It's a strange concept, especially for me because I'm used to the baseball Bill James sabermetric view where each player's contribution is quanitified and those add up to wins. Baseball analysts scoff at intangibles and a player's "I.Q." for the game. Yet, that is what's stressed by the Rockets.


It's strange. Almost the opposite of the stat-driven approach to team-building in baseball which focuses solely on a player's individual numbers. The Rockets see something underlying the conventional numbers and they rely on it. Their nerds and mathematicians (Rocket scientists?) have devised some formula to evaluate players and it's working---they've assembled players who THEY know are good but nobody else seems to realize it.

I'll be rooting for them to keep surprising everyone.

Notes:
*Trevor Ariza was once a promising young player for the Knicks until Isiah Thomas gave him away to Orlando for an over-the-hill Steve Francis (a former Rockets star, incidentally). He was later traded to the Lakers and won a championship with them last season. Ariza was presented with his Lakers championship ring before the game to a standing ovation and then went out and helped beat his former team on their homecourt.

*One of the numbers that the Rockets admit to using is Plus/Minus, a number that indicates the net points scored a player's team while he is on the court. Battier has always posted a Plus/Minus number that's up there with the league's elite players. In last night's game against the Lakers, though, he was a minus-15. The aforementioned cousin of Conan, Chase Budinger, lead all players with a plus-17. Full stats here.

*Yao Ming will be out for the entire 2009-10 season recovering from surgery on his foot. Tracy McGrady is still slowly recovering from knee surgery last offseason. (Considering that Trevor Ariza was wearing #1 on his jersey, T-Mac must have had his signature jersey number changed recently.)
Posted by PQ at 7:36 PM