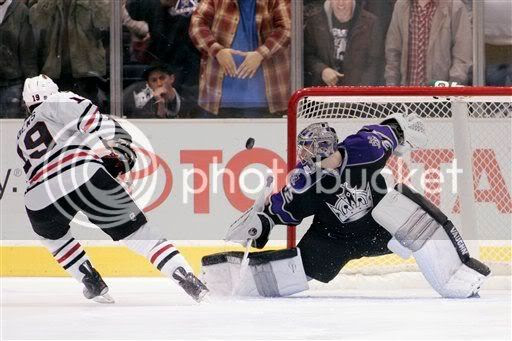 "Hockey Night in My Livingroom"


Enjoyed an evening full of exciting hockey tonight thanks to the amazingness of an obscure little website, atdhe.net, which allowed me to peek at all the games being played around the country. I began watching at around 5 PM Pacific time and my attention was drawn to two northeast matchups: the Ottawa Senators in Boston facing the Bruins and Montreal defending their home arena on a Saturday night against superstar Alexander Ovechkin and the talented Capitals.

The two games had started at the same time and moved along parallel to each other in excitement, forcing me to watch both on my laptop screen at the same time (while listening to the sounds of only the Montreal game, preferring the raucousness of the spotlight game on Hockey Night in Canada). Amazingly, the two games I watched proceeded in the exact same fashion. Both visiting teams, the Senators and the Capitals, jumped out to 2-0 leads in the first period. In both games, the home team came back in the 2nd to tie it 2-2.

In both games, the home squad took a 3-2 lead midway into the 3rd and looked like it might hold on for a win and send the fans home satisfied (similar to the Anaheim fans I witnessed first hand in last Wednesday 3-2 win, more on that later).

At this point, it was extremely fun to watch because both games were winding down with the teams battling it out and the visitors desperately trying to erase their one goal deficits. On the right half of my computer screen, the Senators' leftwinger Milan Michalek darted up the left side on a designed play off a neutral zone faceoff. He was a few steps ahead of the Bruin defenseman but appeared to be at a sharp angle from the net. He flicked it at Tim Thomas anyway and it slipped by, tying the game 3-3 with 20 seconds left in the game. The home crowd sunk in their seats. The visiting Ottawa Politicians celebrated. 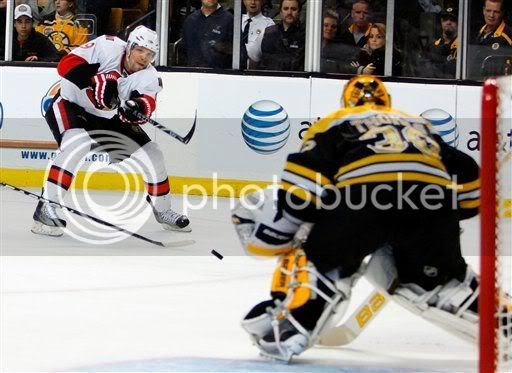 (Michalek flicking the disk as the seconds tick)

Almost immediately afterwards, on the left side of my screen, the Washington Capitals also perfectly executed a designed faceoff play and smacked one past Carey Price to tie the game 3-3 with 12 seconds left in the game. Amazing.

Both games subsequently went into overtime but needed to be settled in a shootout to see who would be the winner because, thankfully, the NHL recently decided that somebody must win every game. No more of that tie bullshit. They deemed that a series of one-on-one dramatic showdowns (The Shootout) shall decide the outcome if the game's normal gameplay arrangement is insufficient to crown a victor.

The events of the two shootouts also played out almost simultaneously. In the shootout format, each team selects three players to attempt to take turns attempting to score on a breakaway. The home team decides whether they'd like to shoot first or last. Both options have their merits, of course, but in both of these games the home team elected to go first and it seems like the home team will usually elect to go first. In Boston, the first three shooters for each team were stopped. The Bruins' fourth, Michael Ryder, snapped one past the goaltender and the Senators' Mike Fisher was stopped by Tim Thomas to clinch the victory for the Bruins. (Ryder scores the winner)
Up north in Montreal, the goalies similarly dominated the shootout. Les Habitants had their first three shooters skate away disappointed, stoned cold by 21-year-old Russian Caps' netminder Semyon Varlamov. A shootout against this deeply skilled, finesse Capitals team is tough to win. Heralded but disappointing Canadiens netminder, 22-year-old Carey Price, couldn't keep his team in it. Niklas Backstrom came in and confidently flicked one past him for a Capitals victory. 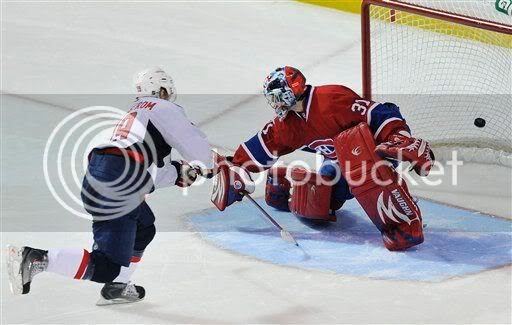 (flick!)
The hockey fun (and the strange coincidences) did not end there. The wonderful "Atdhe" (I'd love to know what that actually stands for...probably something Swedish) allowed me to watch the 3rd period of a rough battle between the Red Wings and Blues in St. Louis. Usually a frontrunner's treat, the Red Wings are trying to stay up at the top of the windy Western mountain bumping shoulders with the Conference's beastly competitors despite losing their leading goal scorer from last year to their closest rival and shedding a few other important pieces from their recent string of Cup runs. The perennial contenders have also already suffered the loss of some key players to injury this season and I've become a supporter for them as they try to stay afloat (I have a soft spot for flagship franchises trying to keep a dynasty going through rough times---the Spurs, for example). Here they faced a budding rough and feisty up-and-comer in the St. Louis Blues, a team that climbed to 6th in the Western Conference last season and hopes to do better this year.
Unlike the earlier games, this one featured the home squad jumping out to a 2-0 lead in the first. The Red Wings managed to tie it up at 2-2 early in the third but the Blues took a 3-2 lead shortly thereafter.
For the third time in a row, in the third game I viewed on this entertaining evening, the road warriors tied the game in the final minute to push the game into overtime. Henrik Zetterberg deftly flicked the puck from behind the net right at a Blues defenseman's chest and he unsuspectingly deflected the floater into his own net for a goal. Tie game with 57 seconds left. This game also went into a shootout and was, for me, the most entertaining one of the evening.
I consider Pavel Datsyuk a shooutout master. By the numbers, he scores 1 out of every 2 (20 out of 40 according to this website) shootout attempts but I'm not sure I've ever seen him miss. A smooth artist with the puck, he usually relies on his repertoire of two deceptive and devastating shootout moves. One would think the league's goaltenders would catch on to him but he always executes his chosen move to perfection. This short video shows his two main moves:
Tonight Datsyuk used a rare backhand deke to score on the Wings' first attempt after Andy McDonald had scored for the Blues. A few more shooters were stopped until veteran powerfoward Todd Bertuzzi, one of my favorite players to watch because of his rare combination of grit and finesse skill, roofed one over Chris Mason to win the game for the Red Wings 4-3. The third 4-3 shootout win in a row for me.
Capping off my evening of hockey was a hard-fought game watched on television between two new youthful hockey sensations, the Chicago Blackhawks and the Los Angeles Kings. The two teams had squared off in a national TV battle a few weeks ago in Chicago with the Blackhawks winning 4-1. This one was much closer, tied 1-1 after overtime and on into yet another shootout during which the Kings scored on their first two attempts to win the game 2-1, concluding the evening's hockey slate. 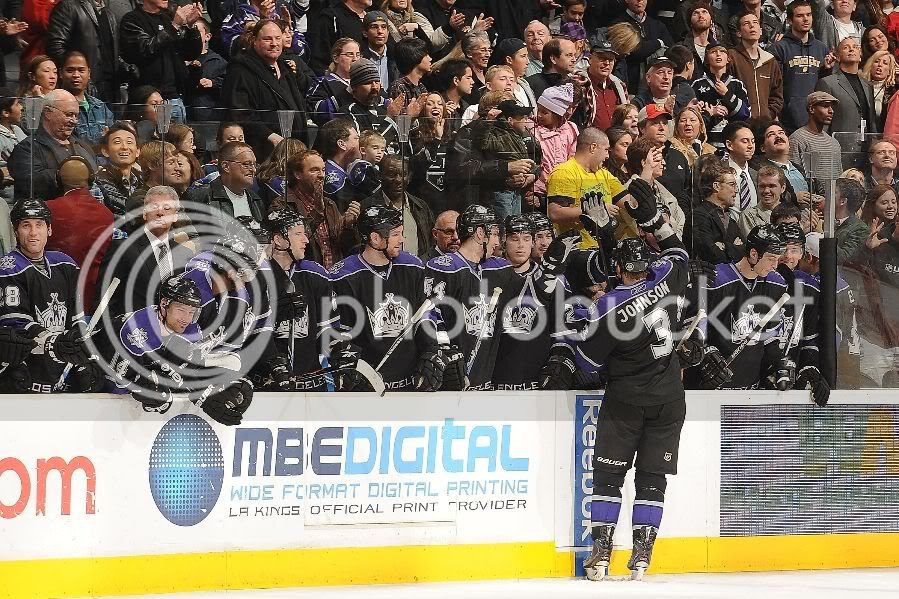