This hardly seems real. In fact, it seems like a funny joke. From the Irish Times: 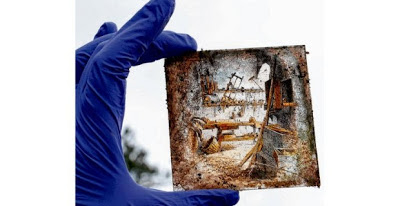 "Archaeologists from the National Museum are excavating an ash pit at the rear of a house in which James Joyce and his family lived between 1900 and 1901."

Currently I'm taking part in an online reading group led by Tom Jackson at RAWillumination.net in which we're reading Robert Anton Wilson's novel Masks of the Illuminati. In this novel Wilson uses his gifted prose to bring together two of the 20th century's greatest minds, James Joyce and Albert Einstein "as the ultimate space/time detectives" compelled to solve a cosmic conspiracy. I'm only about 100 pages into it but it's a great read thus far, very hard to put down.

One of the striking things about the book (for me, at least) is that Wilson constantly employs writing styles and techniques taken from Ulysses to tell his story. He also frequently embeds parodies, puns and jokes referring to Joyce's life and work. An example of this is his occasional use of newspaper headlines throughout the story, a technique featured throughout the "Aelous" episode of Ulysses which takes place in a busy newspaper office. A headline like this one could easily have featured as an inside joke in RAW's book.

A noted synchronicity evangelist, RAW has been known to create swirling synchronicities in the lives of folks who indulge in reading his work (the same can also be said for Joyce's synchro-heavy work). The hilarious synchronicity evident here in this newspaper article is that Finnegans Wake (Joyce's masterpiece) is largely concerned with an old document, a letter, that has been dug up out of an ancient garbage heap by a pecking hen. There's a whole chapter in the book (Chapter 5 of Book I) devoted to the study and analysis of this letter by archaeologists and other experts. Interestingly enough, the real life archaeologists are finding glass slides displaying images like the one above---in the Wake, when we brush off the "accretions of terricious matter" (p. 114) that had gathered upon our excavated object "whilst loitering in the past", we begin to see a blurry photographic image:


Well, almost any photoist worth his chemicots will tip anyone asking him the teaser that if a negative of a horse happens to melt enough while drying, well, what you do get is, well, a positively grotesquely distorted macromass of all sorts of horsehappy values and masses of meltwhile horse. Tip. Well, this freely is what must have occurred to our missive (there's a sod of a turb for you! please wisp off the grass!) unfilthed from the boucher by the sagacity of a lookmelittle likemelong hen. Heated residence in the heart of the orangeflavoured mudmound had partly obliterated the negative to start with, causing some features palpably nearer your pecker to be swollen up most grossly while the farther back we manage to wiggle the more we need the loan of a lens to see as much as the hen saw. Tip. (FW p. 111-112)

Page 111 also happens to be the page where another funny coincidence concerning RAW occurs. He died on 1/11 (and frequently examined the depth and importance of 111 in the Wake) and when you look at the first words of page 111 you read "peraw raw raw teeraw". I'm sure Joyce and RAW are having a beer somewhere sharing a good laugh about all this today.
Posted by PQ at 2:41 PM