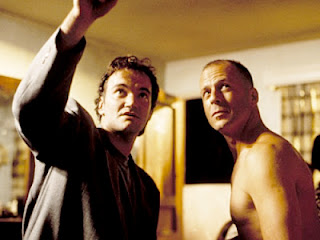 The art of film has occupied my mind a good deal as of late and the luminous scenes of Quentin Tarantino's latest flick have me digging for more analysis and appreciation of his work in particular.

I've seen a lot of the interviews he's done recently in promoting Django Unchained but none that came close to his interview with Charlie Rose. Here he gets very candid in passionately explaining his artistic craft, especially the writing aspect of it, about which he emphasizes how important it is to remember his movies all start with a pen and paper. He also reveals that he's written book-length unpublished pieces of "subtextual film criticism" which sounds absolutely fucking awesome and only fans the flames on the "subtextual criticism" or interpretations I've been working on for a couple years now for a few different modes of art (if you read this blog at all, you'll know what I'm talking about).

Anyway, it's a lengthy interview (48 minutes) but uninterrupted by commercials and filled with legitimately great stuff from a masterful artist discussing his craft. Highly recommended.

(Video after the jump)