Continuing our rapid run through baseball's six divisions to see what we can expect this year. 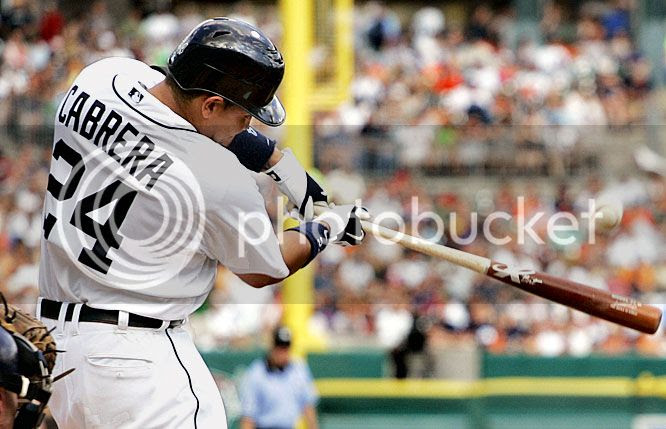 This is the only team in any division that is a virtual lock to win its division this year. Even if they perform at the low end of the expected-potential spectrum, they'll still be superior to anyone else in this perpetually unexciting division.

Miguel Cabrera and his new teammate Prince Fielder are not only two of the most powerful and consistent hitters in baseball, they're both extremely durable. These big boys don't miss games. Predictions and projections carry so much variability but counting on Cabrera and Fielder to form one of the most potent power-hitting combos in league history is something of a foregone conclusion. Yes, that means between right now and the end of the season we'll most likely get to watch a pair of sluggers mash at Ruth-Gehrig levels.

Cabrera, as great as he is, has actually been improving the last three years by most numbers (OPS+, VORP, OBP, with increasing walks and decreasing strikeouts). If there's a better hitter in the sport, there's only one and that's Albert Pujols (though Jose Bautista is getting there). Fielder is arguably right behind Pujols and Cabrera among the most dominant hitters in the game; he packs more power than any batter on the planet while consistently hitting for a good average with plenty of walks. Cabrera is almost 29 while Fielder is about to turn 28 so these guys are still in the heart of their prime.

With all of that, though, comes a big enigma. The two enormous sluggers are both poor fielders by any measure. The rest of the infield (Jhonny Peralta and Ryan Raburn/Ramon Santiago) is not all that great either. It'll be interesting to see just how much their poor infield defense will cost them this year and what manager Jim Leyland will do to make it all work.

The pitching side of the ledger looks excellent, with perhaps the best top-to-bottom rotation the Tigers have had in years along with a solid bullpen. The only question remains how many hits this defense will surrender. No matter what, in this division they'll win at least 90 games.

In a league that has six contenders vying for five playoff spots, it's tough to pinpoint any possible sleeper teams. With a new-look pitching staff loaded with groundball pitchers and some offensive talent, the Indians are a popular candidate to suddenly surprise people but I don't think this team's ceiling is very far over .500. They won 80 games last year with the run-differential of a 75-win team.

They'll be watchable with Carlos Santana in the lineup and youngsters like Jason Kipnis and Lonnie Chisenhall getting their chances to stick in the big leagues but overall this team just doesn't appear designed to have quite enough scoring, pitching, or defense to compete with the big guns in the AL this year. I expect them to finish with 82 or 83 wins, in second place but far behind the Tigers and absent from the Wild Card race.

I'm not nearly as pessimistic about this team as some people I've read. Yes, they didn't make any big acquisitions while losing one of their best pitchers. But long-limbed lefty Chris Sale has looked dominant as a starter this spring and he might even outperform the departed Mark Buehrle. The soft-tosser Buehrle has produced around 2.5 WARP (Wins Above Replacement Player) the past five years while the hard-throwing Sale is projected to be at 3.2 WARP and could easily exceed that if he pitches enough innings. Along with Sale, the rest of the starting rotation looks solid as well.

On offense, the hapless Adam Dunn is baseball's best candidate for a huge comeback year. After building a career as a remarkably consistent slugger and on-base machine, Dunn had perhaps the worst full season for a hitter in major league history last year. He's got nowhere to go but up. (And, for what it's worth, he's looked great in Spring Training.)

I like Ozzie Guillen because he's a fun character and knows how to manage a bullpen but it was clear last year that the constant public strife between he and general manager Kenny Williams was affecting the team. I have zero confidence in new manager Robin Ventura---he was once a great New York Met but the guy has literally never managed a baseball team at any level. Nevertheless, his relatively tranquil demeanor might allow players to relax and do their thing which might prove to balance out whatever shortcomings Ventura may have as a tactician and leader.

What a mess. They've got one of the weaker overall farm systems in the game and their major league team is in shambles. While it looks like Justin Morneau might finally be healthy to start the year, he'll take his hacks at DH which means their starting first baseman will be... Chris Parmelee. Though Parmelee hit very well in limited action last year (1.035 OPS in 21 games), he's never come close to that in the minors (.791 career OPS) and there's no reason to expect him to post even league average numbers in the pros.

Joe Mauer is an incredible player when healthy but that's a rare event. He's missed time with injuries just about every season of his career and he'll be 29 soon. The pitching is no better. They've got nobody. Well, maybe Francisco Liriano could regain his form and pitch well but other than that, they're doomed. This team will battle the Royals in a fight to stay out of last place in the majors' weakest division.

They have some promising young hitters, particularly first baseman Eric Hosmer who made it to the majors at age 21 last year and hit .293/.334/.465. Alex Gordon exploded last year, suddenly going from disappointment to superstar. Even if he regresses a bit, he'll still be a very good hitter (with great defense). Other than those two guys, and DH Billy Butler, there's nothing much on this team. Mike Moustakas is still only 23 and might become a good hitter but that's it for them. Everyone else is mediocre at best.

The question I pose to anyone who thinks this team might improve this year is: with what pitching staff? Their entire rotation, including any possible fill-ins, consists of players that are projected to be below replacement level (depending on your feelings on Jonathan Sanchez, a talented but disappointing player for years). They might have one of the worst run prevention units in baseball.

In stark contrast to the Twins, they might be watchable. Just don't expect them to win many games.
Posted by PQ at 5:10 PM