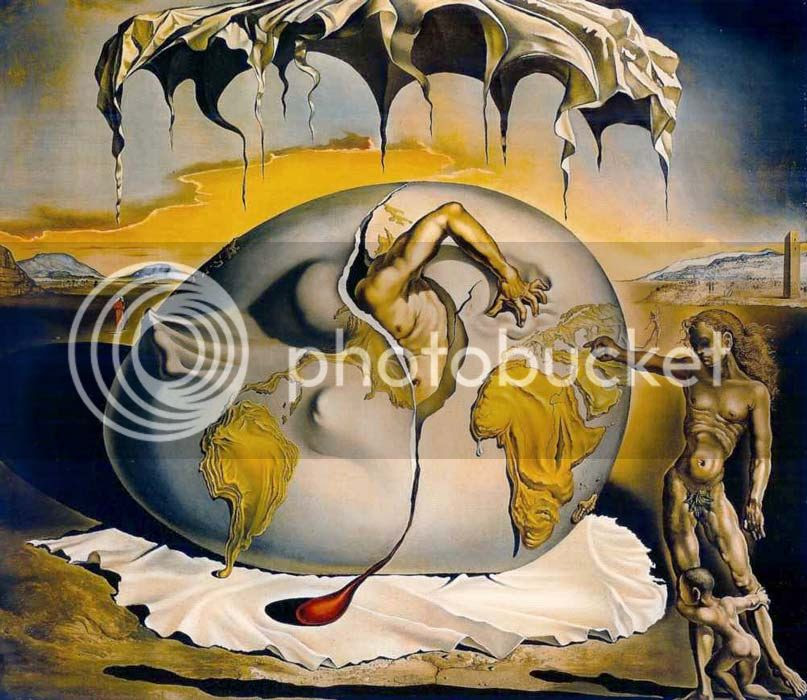 Geopoliticus Child Watching the Birth of the New Man by Salvador Dali
At last, I am reconnected to the internet. Not counting a couple nights in a La Quinta Inn, I haven't had regular internet access since the end of January.

It's certainly been a productive interval, though. We drove for four days through California, Arizona, New Mexico and the dreadfully huge and empty wilderness of Texas; scoped out and settled into an apartment; did our best to make it a cool and comfortable place to live; and I've finished the first part of my three-part essay on Joyce & Dali which I'm submitting for the North American James Joyce Conference.

Now that I've got my connection to the interwebs back, I've got plenty to post about on here. Here are a few of the things you can expect to see.

- I've had this half-finished post sitting in the pipeline for a while but I'm determined to finish it up in the next week or two: "16 Reasons Why James Joyce is the Greatest Writer Ever."

- Along those same lines...one of the great things so far about Austin is a chain store called Half Price Books. Their selection is ENORMOUS and, unlike the big corporate bookstore chains, they aren't promoting the usual bullshit, heavily-marketed, high-budget junk. Instead they've got aisles and aisles of whatever you want. It's like a huge, well-stocked library where the books cost 5 bucks or less. Anyway, the store near downtown Austin had a shockingly rich Joyce collection. Naturally, I picked up a bunch of books (for an average price of about 4 bucks each). But they've also got a special secluded section in the store for rare books. In there I found a gem that was so freakin' cool I had to acquire it for my treasure chest even though it was a bit expensive. It's an elongated, beautifully designed artsy collection of Joyce's poetic writings (including all of his poems as well as his epiphanies and some of the most poetic selections from all of his books). What makes it so special, to me at least, is that it's a book from 1969 that was printed in Poland with English on one side and Polish translation on the other, put together by a famous Polish translator named Maciej Słomczyński. With exquisite etchings all throughout and thick parchment paper it's certainly pleasing to the eye but reading Słomczyński's introduction is what drew me in. It begins:


James Joyce was probably one of the greatest poets who ever lived on our globe, so abundant in poets, but he did not trouble himself to create within the limits of this or that literary genre.

His words on Joyce's masterpiece are also worth sharing:


Almost everybody who had enough strength and patience to make his way, day after day, step by step, through the incredible labyrinth of [Finnegans Wake], realized that he is dealing with an extraordinary book, great but inaccessible.
I remember my first reading and my impression of listening to someone singing beautifully, but in an incomprehensible language, accompanied on some unknown instruments which issued fascinating sounds yet unlike anything I had known before, sounds I was unable to define in any musical scale.
Years later I began to understand: Finnegans Wake, in which Joyce wanted to embrace everything---the whole history of man, all his arts, sciences, misfortunes and expectations---is a book written in the Tower of Babel in mixed languages and in dialects of all epochs and all countries. And, to my mind, it is the purest poetry I could imagine.


- When I contemplated who are, at this moment in time, my favorite artists in any genre, those whose work I'm highly passionate (near obsessive) about, I came up with a pretty interesting list and I will be sharing that here very soon.

- Moving on to the hip hop sphere... All throughout the road trip from Cali to Texas and our subsequent drives around to explore this new city, and while we unpacked our stacks of boxes in the new place, I had the same album playing over and over again on the speakers and it's only continued to sound better and better. The album is a brand new release from Kevlaar 7 of the Wisemen (his first official solo album, actually), an EP entitled Who Got the Camera? that deals entirely with themes of revolution and social upheaval, exactly what we need in this country right now but also, synchronistically, exactly what is going on throughout the world right now (the album was released on February 1st and the Cairo street protests started escalating right about the same time). It's a highly emotional, musically superb, big-palmed slap to the plastic face of our criminally oppressive (at home and abroad) empire. When I was first listening to it, hearing one of my favorite current hip hop artists speak so clearly, openly, informatively (and angrily) about this current situation just perfectly embodied, to my mind, Ezra Pound's famous words on the social importance of the artist: "The artist is the antenna of the race, the barometer and voltmeter." Not the journalist, the TV news anchor, or the politicians. The artist is the antennna tuned into the current frequency of the world and he (or she) interprets it through art, in this case: music. What's in the air? "Pungent smells of classism and oppression" or as Kevlaar later announces: "Storms of persecution should spark swarms of revolutions."

I've been so struck by this album and the weighty message it carries that I have created a new blog which will be entirely devoted to analyzing, expanding upon, and discussing the content of it as well as educating folks on some of the many historical figures mentioned and keeping up with the happenings of the world and the crumblings of the New Roman Empire.


The first song I will analyze is called "I Have a Dream," the first single (released on MLK Day) off the album, its immensely strong beat provided by an expert underground loop-crafter named Woodenchainz (whom I've spoken about here before). Lyrically, it is a modern day retelling of Dr. Martin Luther King, Jr.'s "I Have a Dream" speech, an update so to speak.

the mainstream is bubblin'

showing zero substance, I've had enough and passion's doublin'
Stumblin' in the valley of anguish,
hungry for dreams,
in fact: WE FAMISHED
deep-rooted, examinin' antics
I have a dream today that the devil vanished
Replant this in our handbooks, TEACH OUR CHILDREN THE ANSWERS
- I'm thinking of starting a couple of regular weekly posts on here. The first will be "Thirst for Knowledge Thursdays" in which I will randomly select a book from my Jacob's Ladder Bookcase and discuss it, explain why it should be read, and how I came across it. Another is "Potent Quotables" and that'll just be a cooler name for something I've already been doing a little bit of: posting cool quotes. (The title for this post is from an oft-used Jeopardy category that always stayed in my head from watching SNL's Jeopardy parodies. "Potent Potables" actually means strong, alcoholic drinks.)
- The chronicles of my journey across the southwestern quadrant of the US will definitely have to be put together and I will share it here on the blog, although, since it will inevitably take up many many paragraphs, I'll stick it behind some kind of "Read the rest of this entry" wall instead of clogging up the page with it.
- I'd like to write a couple of posts about my time in San Diego because it was an extremely cool place and time. I met a lot of great people, in fact, you can definitely expect a post about "The Coolest Person I've Ever Met" all about a good pal of mine in San Diego.
- Also, coming along down the line.... MLB 2011 season preview, Carmelo/Knicks and other NBA gushings, some sports book reviews and all kinds of other things. Stay tuned.
Posted by PQ at 12:16 AM