The Summer of Jazz: A Review of Installments 7 & 8 of the Madlib Medicine Show

For the summer months, the Madlib Medicine Show (a one-album-per-month series that the musical mastermind known as Madlib has blessed us with this year) shifted fully into jazz mode with Medicine Show #7: High Jazz in July and #8: Advanced Jazz in August. Although previously I've never been a fan of jazz or even given it much of a chance, Madlib's musical genius sucked me in and got me hooked. All through the summer, my ears were tuned to these new jazz releases and I even went out and purchased some of his previous jazz albums including the excellent debut Angles Without Edges by the one-man band calling himself/themselves Yesterdays New Quintet. 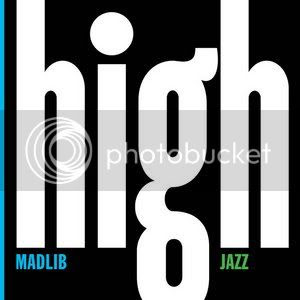 High Jazz is an original jazz album featuring new and unreleased tracks from some obscure and unreleased Madlib jazz projects under pseudonyms like Russell Jenkins Jazz Express, Jahari Massamba Unit,  The Kenny Cook Octet, Joe McDuphrey Experience, and The Big Black Foot Band. It's really a hodgepodge of random new and old tracks but yet it flows together seamlessly into a very nice little album. Overall the sound is very cosmic, almost shamanic sometimes but always (seemingly) done with jazz instruments.

My favorite track is the "live" rendition of "Broken Dreams" by Yesterdays New Quintet. The entire "live" performance, which is almost 15 minutes long, is excellent and has the slightly grainy and a-bit-off-key sound that a live jazz quintet would be expected to have. Except here it's one guy pretending to be five while pretending the five-man band is playing live. It's truly amazing both in thought and result. And, of the three tracks they play, "Broken Dreams" sounds the most wonderful to me with its slowly intoning heavy and deep guitar moan that actually conjures the dream music in the film Inception (how perfect that this album came out right around the same time the movie did). Over that guitar groan another melody chimes in through a piano, then an electric piano, multiple diverse drum sounds, and this all rhythmically carried along, a wagon of instruments rolling down the street producing beautiful song.

It's as though the dark moaning melody that always remains in the vibrating backdrop is the element of a dream. The whole song is a dream although it's musically depicting broken dreams. The dreams are introduced through the hopeful soft-key piano melody and then progressively we hear the sound of the "ruin of all space, shattered glass and toppling masonry," but it's all introduced and executed harmonically. (Note that the live rendition sounds different---better to me---than the original version.)

The harmonic balance of multiple different elements is one of the keys to what makes this music so gratifying and Madlib such a genius. Not only a range of different instruments and sounds but even two or three different melodic tempos are weaved together at the same time creating a musical atmosphere and a wide, spacious, mysteriously cosmic one. Using a different metaphor, Madlib's jazz music is a Jenga tower built from multiple layers of sound and tempo, swaying rhythmically in the wind.

"Reality or Dream" is another example of this. The song feels like the sounds of descending down a tube like Alice down the rabbit hole, grasping on to anything you can and dragging it down with you. There's probably over a dozen different sounds as you descend downwards here. The key recurring motif though is an eerie, Arabian flute that smoothly chimes before getting caught up in the mess of scattered objects, becoming bent and manipulated.

"Space & Time" is the smoothest track on the album, a melodically expanded jazz loop that doesn't venture as far out into experimental realms as some of the other tracks. It's closer to a hip hop beat than anything else here, even by its relatively short length (1:47) compared to the other much lengthier tracks around it. It's followed by the dusty guitar strings and soft melodic drums of "Conquistador," a track that plays like a spaghetti western space exploration flick. Music like this is truly an experience. Like a Disney ride or something. You're lifted and carried through multitudes of metamorphing scenes.

The thirteenth track, entitled "Tarzan's Theme," has stuck with me since my very first listen. It carves little holes through the conscious into the sub- or unconscious. It does this through (again) multiple melodies that are introduced and weaved together. Jangling drums (always a pleasing Madlib specialty) accompany throughout. The song is by "The Big Black Foot Band" and it naturally has that hypnotic and colorful shamanic ring to it. Even the strange and repeated chants of things like "starved killers migrate south"and "teeth, hair, teeth, teeth" seem to just go with it.

The only tracks I don't like are "Electronic Dimensions" (way too electric for me) and "High Jazz" (boring) but they really don't seem to hurt the overall feel of the album at all. They're right at the beginning and I can endure them knowing the gold that awaits over the horizon. It's impressive that, in the midst of a series of 12 albums, in a year that has seen the release of two other very good full-length jazz albums from the same guy (who's most famous for his hip hop production), we have here an album experience which promotes and rewards multiple listens. Most of the songs on here feel like they take you places. You can't really ask for more than that.

...But Madlib is the musician who keeps on giving. And so he followed up his own jazz joints with a mixtape of some of the very best jazz musicians ever. I can describe this latest Medicine Show offering no better than the cardboard tab that came affixed to it:


No. 8 - Advanced Jazz: Imagine an 80-minute music history course taking place in a dusty, hazy studio with wall-to-wall jazz vinyl---records from the past 40 years---jazz, fusion, obscure. This course will not be graded. There will be no lecture. Madlib's at the turntable. Class is now in session.

This "music history course" features audible classes on legends like Miles Davis, Ornette Colemen, John Coltrane, and Sun Ra as well as some of the others you see here crossing the Hudson: 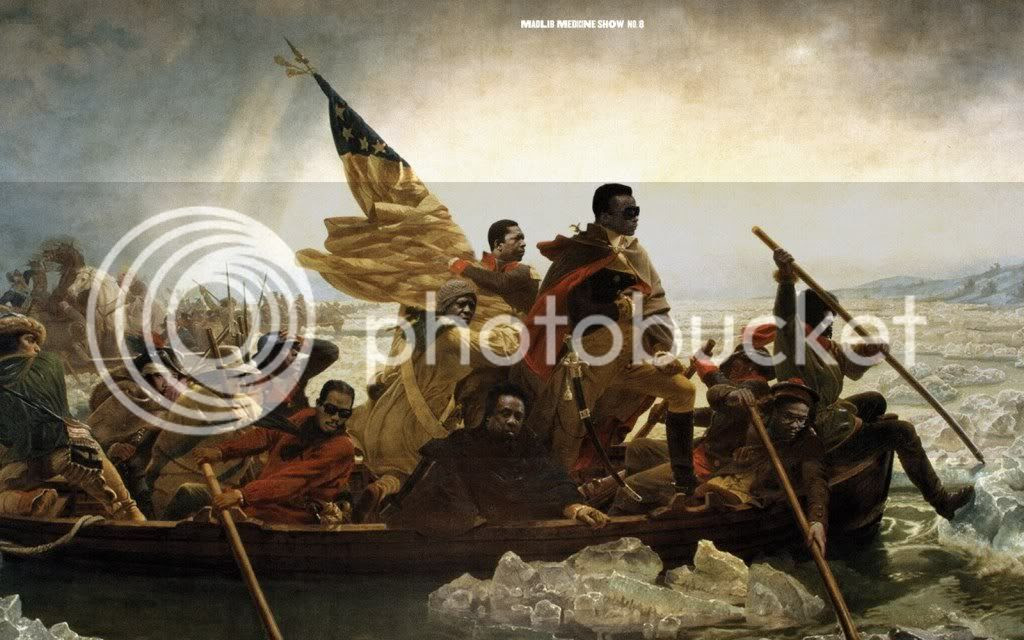 There have been some terrific album covers in this Medicine Show series but this tops them all. Since receiving it, I've kept this CD standing up atop my desk, the small glass-cased image of Miles and his pals looking regally upon my writings.

The first thing you notice about this album is that it's LOUD. The sounds really seem to have been turned up and it works great as you can hear the depths of the live instruments and crackling, dusty old vinyl records. There are ten tracks of varying length, each named for a jazz legend and featuring a hand-picked and nicely-mixed collection of their songs. The opening is lovely: a gravelly voice speaking and settling the listener in for a comfortable musical excursion like a hypnotist preparing a patient ("are you there?") and then the pianos, horns, drums, everything, it all marches in so beautifully that I get the chills every time I hear it even though I must've listened to this opening 20 times by now. It then transitions into a jazz flute rendition that Ron Burgundy would describe as "a little Ham and Eggs."

Unlike the other great jazz(esque) mixtape in this series, Flight to Brazil, this isn't just a bunch of Madlib's favorites thrown together and played with very little interference. Instead, Madlib throws in plenty of his customary obscure skits and interludes while also weaving the songs together like a DJ, letting some play longer than others and maintaining a pretty consistent vibe while exploring the works of many different artists. The height (and hilarity) of Madlib's mixing skills here comes at the transition of tracks 2 and 3 when the former closes with a very serious-sounding man touting a film that he feels "is of great importance" and urging us "to undergo this uplifting cinematic experience" only to lead into the opening of track 3 with its hilarious mock blaxploitation trailer ("if you wanna get it together, and see the brother who predicted the weather, dress your mother up in leather, and see KING PIN").

The heart of this album, its thumping, beating, pulsating heart, is an amazing three-minute-plus drum orchestra performance in the middle of track 3 leading into the saxophone of Pharaoh Sanders. You can hear the end of it here in the promo video for the album but honestly, if you have even the slightest interest in jazz or just enjoy great music, I highly recommend picking this up this CD and hearing it in full. It'll really get your blood pumping.

Track 4, dedicated to Herbie Hancock, opens with words of wisdom that resonate and jump back and forth between each side of your headphones before taking you to new lands musically. This track features my favorite melody on the whole tape, a beautifully smooth piano over drums beginning at the 3:06 mark. It's one of those songs that sticks in one's head and pops up unbidden at random moments. Other highlights include: the entire Sun Ra track (Madlib pays proper homage to one of his oft-referenced favorites), the chilling big band track at the opening of Phil Ranelin's track, the exquisite soul track at the beginning of Deodato, and the closing horns/piano/drums from John Coltrane.

This mixtape is lively, bursting with instrumentation and energy, all delivered by Madlib from dusty old jazz records by some of the best musicians of the 20th century. It's a CD I'll probably go back and listen to 20 years from now and still enjoy. A spectacular collection of music, stitched together like an all-embracing quilt.

Note: We didn't get the expected Medicine Show #9 in September apparently because it wasn't finished on time but we may be getting two of them in October. We're at least assured of getting #10 which will be a collection of 60s and 70s soul and funk. Stay tuned for a full review of that one once I soak it in.
Posted by PQ at 12:14 AM