The Scaly-foot snail makes its habitat in the most treacherous region in the world---it lives along the hydrothermal vent fields deep down on the sea floor in the Indian Ocean. These subaquatic vents spew forth hydrogen sulfides, a highly-toxic poisonous gas which the Scaly-foot snail not only withstands but, using a self-produced bacteria, turns into sustenance.

Withstanding the pressure of nearly 2 miles of ocean water weighing down, defending itself from predators, and thriving in a zone of boiling hot poison gas spewing everywhere, the Scaly-foot snail constructs a shell made out of iron. It is the only known organism to create iron sulfide biominerals for use in its exoskeleton and shell. The iron shell and scales protect a creature with the largest heart, relative to body volume, in the entire animal kingdom (4% of its body volume). Scaly-foot snails are simultaneous hermaphrodites possessing both sexual organs and, despite their high fecundity which creates many eggs, the species is now considered endangered thanks to deep-sea dredging in the Indian Ocean floor.

[Cryptoconchoidsyphonostomata was the name of a stage play performed at Royal Theater in Dublin in James Joyce's day. The word literally means something like "hidden shell-like tube-mouths."]

"the quivers of scaly silver and their clutches of chromes"  FW 477.26 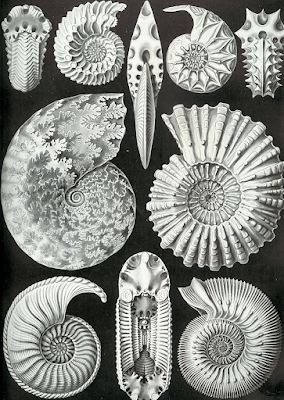 Faced with "the horrible dangers of war," Bernard Palissy contemplated a design for a "fortress city." He had lost all hope of finding an existing plan "in the cities built today." Vitruvius himself could be of no help in the century of the cannon. So he journeyed through "forests, mountains and valleys to see if he could find some industrious animal that had built some industrious houses." After inquiring everywhere, Palissy began to muse about "a young slug that was building its house and fortress with its own saliva." Indeed, he passed several months dreaming of a construction from within, and most of his leisure time was spent walking beside the sea, where he saw "such a variety of houses and fortresses which certain little fishes had made from their own liquor and saliva that, from now on, I began to think that he was something that might be applied to my own project." "The battles and acts of brigandry" that take place in the sea, being on a larger scale than those that take place on land, God "had conferred upon each one the diligence and skill needed to build a house that had been surveyed and constructed by means of such geometry and architecture, that Solomon, in all his wisdom could never have made anything like it."
With regard to spiralled shells, he wrote that this shape was not at all "for mere beauty, there's much more to it than that. You must understand that there are several fish with such sharply pointed beaks that they would devour most of the above-mentioned fish if the latter's abodes were in a straight line: but when they are attacked by their enemies on the threshold, just as they are about to withdraw inside, they twist and turn in a spiral line and, in this way, the foe can do them no harm."
- Gaston Bachelard, The Poetics of Space, p. 146-147

There is a spell, for instance
in every sea-shell:

continuous, the sea thrust
is powerless against coral,

bone, stone, marble
hewn from within by that craftsman,

is master-mason planning
the stone marvel:

yet that flabby, amorphous hermit
within, like the planet

senses the finite,
it limits its orbit

of being, its house,
temple, fane, shrine:

it unlocks the portals
at stated intervals:

prompted by hunger,
it opens to the tide-flow:

but infinity? no,
of nothing-too-much:

I sense my own limit,
my shell-jaws snap shut

at invasion of the limitless,
ocean-weight; infinite water

can not crack me, egg in egg-shell;
closed in, complete, immortal

full-circle, I know the pull
of the tide, the lull

as well as the moon;
the octupus-darkness

is powerless against
her cold immortality;

so I in my own way know
that the whale

can not digest me:
be firm in your own small, static, limited

orbit and the shark-jaws
of outer circumstance

will spit you forth:
be indigestible, hard, ungiving,

so that, living within,
you beget, self-out-of-self,