One of the most dominant hitters in major league baseball history, Dick Allen, died earlier this week a day after he should have been elected into the Hall of Fame. It's sad and shameful that baseball's Hall of Fame committees didn't manage to vote him in before he died. Although he didn't have that long of a career, Dick Allen was a fearsome offensive force and put up huge numbers during the lowest-scoring years of modern baseball. He also did this while having to withstand the bitter racism and bigotry of 1960s Phillies fans who would pelt him with garbage so often that Allen wore his batting helmet in the field for protection and was even moved off third base into left field to keep him safe from the wrath of his team's home-field fans.

I became interested in Dick Allen when I was a teenager devouring books about baseball history. He stood out as a fascinating figure, a name I'd never heard of before whose performance ranked him among the best baseball players ever. I wondered why he wasn't a household name like some of his contemporaries. The dude did nothing but mash. He won the Rookie of the Year award in 1964 with one of the best rookie seasons ever, when he led all of baseball in runs scored (125) and triples (13), while topping the National League in Total Bases (352). He kept putting up big numbers for the next decade, eventually winning the AL MVP with the Chicago White Sox in 1972 after he had demanded to be traded out of Philly and bounced around St. Louis and Los Angeles. His career Adjusted OPS+ of 156 ranks him right up there with guys like Willie Mays, Frank Thomas, Hank Aaron, and Joe DiMaggio as the best right-handed hitters ever. From 1964 to 1974 he essentially put up Mike Trout numbers, perennially hitting 30 homers with a .300 batting average and tons of walks---all of this during the worst era for hitters in modern baseball history. In what became known as the Year of the Pitcher in 1968, when the entire league saw scoring sink to Deadball Era levels, Dick Allen crushed 33 homers and put up an .872 OPS (the average OPS in the NL that year was .641---for comparison, the average OPS in the 2020 MLB season was .740).

As a sensitive black man playing in the 1960s and 70s, nothing was ever made easy for him and sometimes in the midst of conflicts with management he didn't make things easy for himself. Sportswriters almost uniformly turned against him and crafted an image of him as a bad teammate. It would take decades to set the record straight. Former teammates Goose Gossage and Mike Schmidt have been especially vocal in speaking the truth about him. Despite being a popular player with fans, an MVP, a Rookie of the Year, and seven-time All-Star, he was portrayed as a pariah and even Bill James mischaracterized him as a selfish player. All of this contributed to him being left out of the Hall of Fame. Thankfully, the Phillies franchise finally commemorated him this past summer, retiring his number 15.

To go back and read about why Dick Allen was considered such a controversial player---Bill James once wrote that he did more to keep his teams from winning than any player ever---you would think there must be a distinction in opinion between those who followed his career when he played and those who didn't. The stories of Dick Allen as a malcontent seem no worse than the stories about Manny Ramirez during his career as a controversial player. You would think if the negative affect of their bad behavior was that meaningful it would show up in the stats. How much better could Dick Allen have hit though? He wasn't a good defensive player (like Manny), but just looking at the production at the plate it's hard to see where he could've improved. Manny had more success in the postseason than Dick Allen but the latter would probably have appeared in the playoffs more with the expanded postseason format we've had the last 30 years. And both Manny and Dick Allen did nothing but rake year after year. If not for his steroid suspensions, Manny Ramirez would be a lock for the Hall of Fame. His career was shorter than Manny's, but Dick Allen should be a lock for the Hall of Fame, too.

Allen broke into the league with one of the greatest rookie seasons in baseball history in 1964 and had his best season in 1972 when he won the AL MVP with a monster season (37 homers, 113 RBI, with his .420 OBP and 1.023 OPS both leading the major leagues). He consistently mashed during a low-scoring era while playing in pitcher-friendly home ballparks, competing against some of the greatest players in the history of the game. From 1964 to 1974 he was the most dominant hitter in major league baseball and look at some of the guys he outranked by Adjusted OPS+ (via Baseball-reference.com):

Sadly, the Hall of Fame has screwed him over just like they did with Cubs legend Ron Santo. The third baseman Santo for years had a strong case to be elected to the Hall but they never actually voted him in until shortly after he died. There's a good chance they will do the same now with Dick Allen (he fell one vote short in 2014). Several famous and beloved retired baseball players have passed away in this horrible year of 2020 (among them Tom Seaver, Lou Brock, Bob Gibson, Joe Morgan, and Jimmy Wynn) but losing Dick Allen when he was on the verge of finally getting elected into the Hall of Fame really stings. Baseball's Hall of Fame has gradually sacrificed any legitimacy or respectability it once had, with the stars of the 90s-00s era locked out because of performance enhancing drugs and guys like Dick Allen and Ron Santo seeing their lives end before they could get elected in. Meanwhile, inarguably far inferior players have been voted in recently, watering down the criteria for election to the Hall and just making the whole thing seem pointless and ridiculous.

If you'd like to read more about the life and career of Dick Allen, I direct you to some pieces written by authors with a much better understanding of this complicated saga: Steven Goldman at Baseball Prospectus and Jay Jaffe at Fangraphs wrote especially insightful pieces about the passing of Dick Allen this week. And this piece at Fangraphs by Shakeia Taylor from 2018 "Is Baseball Ready to Love Dick Allen?" was also helpful in learning more about the man Dick Allen was and what he dealt with. Also see Tyler Kepner's piece in the NY Times.

During his MVP season with the White Sox in 1972 he appeared on this phenomenal Sports Illustrated cover: 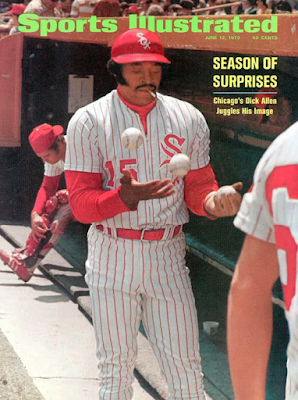 Earlier this year, Brian Kenny on MLB Network broke down the statistical case for why Dick Allen deserved to be in the Hall of Fame: