Evaluating the 2019 Mets at the Halfway Point 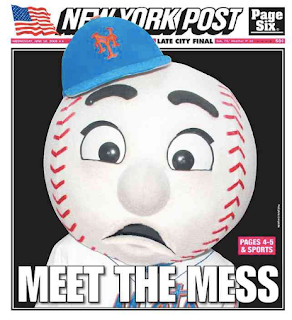 The last time I posted on this blog was back on March 30th, three months ago, where I offered my predictions for how the National League would shape out in the 2019 baseball season including an exceedingly optimistic take on the New York Mets. Since we're now just about at the halfway mark of the season (the Mets played their 78th game today) here's how this frustrating, underperforming team stacks up. (Edit: I wrote this right before all the drama of the Mets' excruciating loss to the Cubs that Sunday at Wrigley Field and the subsequent Mickey Callaway blowup against a reporter that has seemingly sent the Mets deeper into a tailspin ever since.)

Overall their standing looks pretty bleak for a team that had boasted about contending this year. New GM Brodie Van Wagenen made a bunch of moves in the offseason and spent a chunk of money, but his moves haven't amounted to much. Everyone he added to the roster has been either injured or disappointing with the sole exception of J.D. Davis, a minor leaguer acquired from the Astros who has been a solid corner bat for the Mets but who is also the worst defensive player on the team. That's been a theme for this squad. Even though their season has been a massive disappointment thus far compared to expectations, the Mets have actually been a pretty solid ballclub in most facets of the game, except their bullpen has been shaky at times and bad defense is killing them.

Offense
According to Fangraphs' wRC+ metric (which takes all offensive production into account and adjusts for league and ballpark), the Mets offense has been 13th best in baseball, solidly average. Their 101 wRC+ also ranks 5th in the National League, behind only the Cubs, Brewers, Dodgers, and Braves---that is, three first place teams and the Brewers who are 41-36. Led by a quartet of reliably effective homegrown hitters in Pete Alonso, Michael Conforto, Jeff McNeil, and Dominic Smith along with the aforementioned J.D. Davis and a resurgent Todd Frazier (who is batting .302/.417/.512 with same number of walks and strikeouts since May 25th), the Mets offense has been surprisingly good. Their only glaring problem on the offensive side is that they run into outs on the bases way too often; many a Mets rally has been stifled by over-aggressive base-running. Also, they've gotten very little from Robinson Cano, Amed Rosario, and Juan Lagares at the plate, all of them with OBPs below .300. If any of them start getting on base more consistently, the depth of this offense could carry the team through rough stretches.

Starting Pitching
While the overall production of the Mets' starting rotation has seemed very disappointing with a collective ERA of 4.37 that ranks 17th in MLB (just a bit better than both the Braves and Phillies), their fielding-independent numbers are actually pretty strong. Their FIP (fielding-independent pitching) of 4.02 ranks 9th in baseball and 6th in the NL. So, despite the rotation failing to meet expectations thus far this year, they've still basically pitched better than all but five teams in the National League. The pitchers have been hurt by a shaky defense. Noah Syndergaard and Zach Wheeler especially appear to have suffered from defensive ineptitude. Another big factor affecting this rotation has been the long ball. Home runs have skyrocketed league-wide because of a juiced ball, but the Mets have been especially hurt by this environment---their presumed top four starters (Jacob deGrom, Syndergaard, Wheeler, and Steven Matz) all have sky-high rates of home runs per fly balls allowed that are above their career norms. Somehow, soft-tossing lefty Jason Vargas, who Mets fans all wanted cut from the roster not too long ago, has given up the lowest HR/FB rate on the staff and helped stabilize a free-falling team recently (this before blowing up at a reporter like an asshole and not apologizing, helping throw the team into its worst stretch so far).

Bullpen
Here lies the source of Mets fans' greatest fury and disgust this season. The bullpen has been ghastly, with a collective 5.28 ERA that ranks 28th among in MLB. More advanced metrics show the Mets bullpen among the worst in the league. They have had some excruciating, heartbreaking losses where they've blown leads late. Stuck in my memory are the Edwin Diaz meltdowns against the Dodgers and Cardinals, in the latter game the Mets had a 2-run lead with 2 outs in the 9th and still ended up losing. Bad fielding has hurt the relievers a bit, but mainly they've just pitched poorly. Free agent signings Jeurys Familia and Justin Wilson were supposed to shore up the late innings, but Familia has been an abomination (7.81 ERA with almost 7 walks per 9 innings) and Wilson appeared in just 10 games before getting injured. This bullpen has also given up a ton of home runs, superstar closer Edwin Diaz is currently surrendering 1.52 homers per 9 innings, more than double what he allowed last season. The only reliable arm out of the bullpen has been Seth Lugo who has a 2.23 ERA and has mostly kept the ball in the yard, but is a somewhat limited relief weapon because he can't pitch on consecutive days. I should point out that scrap-heap pickup Wilmer Font somehow has a 0.69 ERA, though he's pitched only 13 innings of mostly mop-up work. Right-hander Robert Gsellman has been ridden hard, throwing the most innings out of the bullpen so far, even though he's pitched terribly with runners on base: with the bases empty he's allowed a .244 batting average and a 4.33 strikeout-to-walk ratio, with runners on he gets hit for a .297 average and the K/BB ratio drops to 1.75.

The Mets have shifted some things around in attempt to help the bullpen (including putting $60 million relief arm Jeurys Familia on the injured list twice to basically get his head straight) and recently fired both their pitching coach and bullpen coach. With talented arms like Diaz, Lugo and Gsellman at the back end, they can't possibly be this bad for the entire season. As I mentioned in my team preview, they need to be open to using Diaz more often. Gsellman is no fireman. Lugo has limited availability. Diaz has fallen apart at times, but his stuff remains elite and one way to get him back on track will be to bring him in to pitch more often. Among all NL relievers, Diaz is 43rd in innings pitched (for comparison, Gsellman and Lugo are in the top 10). He's been the 20th most valuable relief pitcher in the National League by WAR but has pitched fewer innings than anyone in the top 20. The Mets aren't lacking for high leverage innings late in games. It's time to start using Diaz more flexibly, and approach every game like it matters down the stretch.

Defense
This has been the great weakness of this Mets team. Even when the offense performs well and the pitching holds it together, they have often been undone by a bad defense. It's going to be very hard for this team to compete when they've got one of the worst fielding shortstops in the league in Amed Rosario (who's been horrible in the field by any metric and by the eyeball test) and, according to Baseball Prospectus' catcher stats, one of the game's worst defensive catchers behind the plate in Wilson Ramos. You just can't succeed with abysmal defense at vital up-the-middle positions. The Mets rank second-to-last in MLB in defensive runs saved. Even with an improved bullpen, this kind of inability to turn balls in play into outs will sabotage a season. Is there anything they can do to address this issue? News that the Mets are considering moving Rosario to center field is promising---he can be replaced at shortstop by Adeiny Hechavarria who's a solid fielder and has even hit a little bit. They will need to stop using J.D. Davis at third base because he's completely incapable of handling the hot corner. Otherwise, they're kinda stuck with this bunch. Ramos was just signed long-term and he's been a bad defensive catcher for a while now. I guess they can spell him for backup Tomas Nido more often but Nido is a zero with the bat. The overall verdict is that this is an extremely flawed roster that needs a highly creative, adaptable manager pushing the buttons in order to succeed and they do not have that. Something's going to change sooner than later. Either they bring in a more creative decision maker or they keep playing badly and the team gets dismantled. Unfortunately, the latter is more likely.
Posted by PQ at 9:17 PM