Rōnin Joyce Scholar, Thought to be Dead, Resurfaces and Other Reports Following Bloomsday 2018


Recently I returned from a phenomenal trip to Antwerp, Belgium where I got to partake in the 26th International James Joyce Symposium. The experience was a great one for a litany of reasons, not least of which because it was a relief to be away from the horrifying moral and ethical disaster zone of America for a while (had the same experience last year on my visit to Toronto). It was also a heartening and enjoyable experience getting to convene with so many fellow Joyceans from across the globe. I met and hung out with so many cool people from such a diverse range of places and backgrounds in the span of a week. (Just at the reception dinner I hung with folks from Belgium, Spain, Portugal, Canada, Singapore, the World Cup on everyone's minds.) And all of us share a passion for literature, especially Joyce. (The funniest line from the opening talks was a city official who opened with "a quote from the greatest novelist of all time, Thomas Pynchon.")

The conference itself was like guzzling from the intellectual and artistic firehose; full days of fascinating papers, lectures, thoughtful convo, incredible artwork, and finishing with recorded Finnegans Wake readings every night outside a pub.

I will have more to say about the conference some other time and place. Here and now I'd like to briefly highlight some of the recent Joyce-related news and nuggets that have popped up lately with Bloomsday 2018 happening last weekend.

An exiled, wandering rōnin of Joyce scholarship thought to be dead for many years, John Kidd, suddenly popped up in a NY Times profile that read like a Coen brothers movie---with this news arriving at that same time (June 12, 2018) the Joyce nerds of the world had descended upon Antwerp for a symposium (June 11-16th) whose opening lecture was delivered by Hans Walter Gabler, one of Kidd's opponents in the so-called "Joyce wars" of the late-80s and 90s.

John Kidd had risen to fame in the 80s as a young Ulysses scholar who challenged heavyweight Joyce authorities over mistakes in their supposedly official "corrected" texts and won the respect of his peers, promising to roll out his own corrected edition of Ulysses until he supposedly lost his mind, rumored to be dead broke and conversing with pigeons and squirrels before he disappeared into oblivion. I wrote about his bizarre tale back in May 2010, under the impression that "Kidd died in his early 50s with his highly sought-after edition of Ulysses unpublished." Almost a year later a commenter chimed in: "I don't think John Kidd is dead." More than a year after that, another commenter declares: "Alive and alive indeed!!!" And after another year: "He's in Brazil."

The NY Times piece doesn't mention this space sadly, except for referring to digging around obscure blogs and "stray comment sections," but I found it a fun and fascinating story that feels like a film. Kidd at his apartment in Rio de Janeiro shown surrounded with stacks of books and paintings, rocking long white hair, belly protruding out of a Hawaiian shirt: 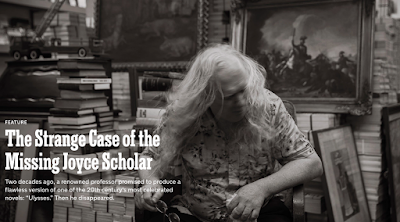 John Kidd, who is 65, is well above 6 feet tall and comfortably carries the emerging evidence of many a fine dinner. He no longer has the tidy short blond hair of 30 years ago. It’s now grown out snowy white and halfway down his back, deep into Gandalf territory. He’s a devoted fan of loosefitting Hawaiian shirts, flip-flops and shorts. ...
Right off, he wants to talk about that Boston Globe article with the pigeons. His outrage is still raw. He’s particularly miffed that he was called “broke.” He wants me to know he’s flush and always has been. He has, at the ready, a notarized letter from Fleet Bank in Brookline dated 14 years ago, stating: “six months avg balance in this checking account has been $15,618.00.”

The story at one point involves the main characters fleeing knife-wielding thugs in the streets of Rio, because of course.

I enjoyed the bits of literary info highlighted in the piece---Kidd praising and recommending Fernando Pessoa's poetry collection A Little Larger Than the Entire Universe (a copy of which has remained here on my desk for months); discussions about what Kidd calls "antic" novels like Don Quixote and Tristram Shandy; and Kidd's devotion to translating an obscure 19th century Brazilian novel, The Slave Isaura.

The piece notes how, in the wake of Kidd's disappearance, the world of Joyce scholarship eventually shifted toward accepting the Gabler edition of Ulysses that Kidd poked so many holes in. Certainly that sentiment was on display in the opening remarks of the Antwerp conference where Gabler received an adulatory introduction before he delivered a presentation on the insanely tedious difficulties involved in trying to derive an authoritative edition of Ulysses. He actually brought up the Joyce wars at one point, sort of brushing it off as drama nobody wanted to hear about.

Yet throughout the lecture and the relatively quiet Q&A afterwards, I kept thinking that so many people in the room must be pondering what I'm pondering: "What ever happened to John Kidd?" And then the next day this piece pops up, sending ripples among the attendees. It must have made an impact in the States because many conference folks, myself included, had friends and family coming out the woodwork to send them this NYT feature.

Perhaps the buzz around this surprise profile will reinvigorate interest in bringing out Kidd's edition of Ulysses, but more likely, as the article hints at, it'll never see the light of day. Though a draft version, complete with Kidd's introduction, apparently exists somewhere, its fate got all tangled up in the bureaucratic webs of editors and lawyers and it is now likely dead. Discussing this story with Tom Jackson and Michael The OG over at the RAWillumination blog, it occurred to me that I own 4 copies of Ulysses, but I don't have the Gabler edition. As Gabler himself emphasized at the end of his talk, Ulysses remains an open text.

Among the many great works of Joyce-inspired artwork on display at the Antwerp conference was the ongoing series of illustrated annotated Finnegans Wake pages being produced by Peter O'Brien of Toronto. Here's a glimpse at the exhibit in the old stone hallways of the University of Antwerp building: 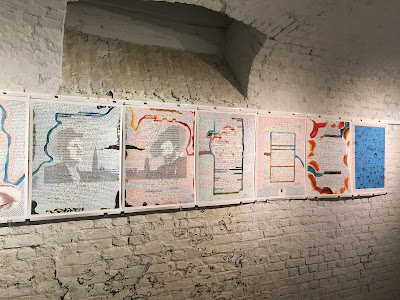 O'Brien recently wrote a feature in the The Globe and Mail discussing his the project and his 40 years of reading the Wake, sharing insights into some of the pieces, as in this note about page 204: "I asked a friend to make two footprints on this page, first at the bottom and then at the top. Only later did I see the word “Barefoot” imprinted on the page." 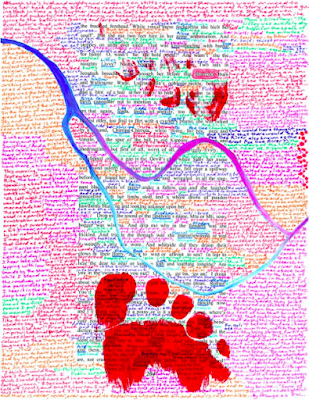 
Derek Pyle and Krzysztof Bartnicki of "Waywords and Meansigns" published a vast chronology of all the Joyce-inspired music they could find. It's a rich and fascinating resource you will want to explore. Here's some further info from Derek Pyle:

A lifelong inspiration to composers such as Samuel Barber and John Cage, Joyce's influence on classical and avant-garde music is well-known. Yet his massive impact on popular music is rarely acknowledged. “Joyce had a profound effect on members of the Grateful Dead, and his works served as major muses in the Southern California punk and indie scene,” explains Derek Pyle. “Joyce even inspired a number-one dance hit: Amber's 'Yes!'”

The History of James Joyce Music highlights Joyce's legacy in the works of well-known musicians and composers like Leonard Cohen, Joanna Newsom, Tōru Takemitsu, and Karol Szymanowski, but the history does not stop there. Included in the history are dozens of obscure musical works from underground and niche musicians, ranging in genre from minimalism and metal to folk and noise.

Over at my "Finnegans, Wake!" blog I just shared the full version of the presentation I delivered at the Antwerp conference. This piece outlines a litany of notable Finnegans Wake enthusiasts from all corners of art and culture, sharing their testimonies on behalf of Joyce's neglected magnum opus.


The Pantheon of FINNEGANS WOKE
(or Why Read Finnegans Wake?
Testimonials from Famous Wakeans)

Stepping Away from Joyce

The Sydney Review of Books has a new piece by Gabrielle Carey, "Breaking Up with James Joyce" explaining her decision to cease studying Ulysses, the Wake, et al after 40 years as a Joyce scholar. She cites other readers who reached similar ends after decades of puzzling through Finnegans Wake. It seems these folks have never been able to find what they're looking for.

Perhaps they've discovered what Joyce meant when, toward the end of his life, he wrote to his son: "Here I conclude. My eyes are tired. For over half a century they have gazed into nullity, where they have found a lovely nothing." (Ellmann, Collected Letters)

Speculating on the Story of Lucia

Lucia Joyce, the apple of her father's eye and a gifted-yet-cursed artist herself, continues to be a ripe source of interest for authors and artists. The Irish Times put out a couple pieces on Lucia recently: Deirdre Mulrooney drew attention to Lucia's dancing career (Mulrooney is working on a documentary film about same) and Sean Hewitt reviewed a recently published novel, Lucia by Alex Pheby, calling it "a searching and fascinating book." Don't forget about the film James and Lucia with Game of Thrones star Aiden Gillen set to play James Joyce that is still in production. I shared my thoughts on Lucia and Finnegans Wake a few years ago here.

The prolific blogger and musician Steve Fly has created an app program that allows you to sample and mix sound effects, music, etc with clips of Robert Anton Wilson talking about and reading from Finnegans Wake. Fly deployed these versatile blends to perfection in a live performance in Antwerp on Bloomsday, putting BloomJamm to great use and inspiring attendees to do the same. You can download BloomJamm from Steve's website and here is a sample of the program: