Some Thoughts on Chess and Artists Who Love Chess


Recently, a new employee started working at my job, a Turkish guy, and in his introductory email he noted that he plays chess competitively. As someone who's long been fascinated by chess, played sporadically for many years, and desires to improve, I of course sought him out to play some games during lunch breaks and try to learn something from him.

The Turkish chess master has now beaten me 21 straight times.

While I have a great interest for the game, I'm a subpar player prone to boneheaded mistakes. He's a pro who plays in tournaments for financial prizes. Once he told me that his chess teacher can play something like 50 games on different boards simultaneously while blindfolded, and win most of them. He confidently asserts that he can beat me blindfolded. I don't doubt it.

Playing chess, talking chess, and getting my butt whooped in chess has rekindled my passion for the game and I've played at least a game or two each day since. Occasionally I'll watch some chess instructional videos or do tactics puzzles. One day I hung around after work and the Turkish chess master (whose first name, Baris, recalls another Turk from an earlier chapter in my life, the manager of a restaurant I worked at in lower Manhattan---we shared a birthday, yet always clashed) provided me a couple hours worth of lessons. My rating skyrocketed from there and I've been playing much better ever since. For some reason I'd always had trouble staying above the 900 level consistently; since that one lesson I've been around 1300. It's much more fun to play when you don't suck.

I can't remember exactly when I learned to play chess. Sometime around 11 or 12, I think. My mom claims it was when I was punished one day, forbidden from watching TV or playing video games, so I somehow taught myself how to play chess.

What I do remember is playing chess games at Zuccotti Park in downtown Manhattan (the very same spot where the Occupy Wall Street movement would later spring up) during lunch breaks when I was 14, working my first summer job in '99 as a messenger in that area, under the shadow of the World Trade Center. There'd be folding tables set up and games going on there a couple days a week. The park players were aggressive, talked plenty of smack, and required anyone who sits down to play to put up money. Serious players only. Many of these dudes were impoverished, homeless, likely just hustling chess games in the park all day for cash. I used to get my ass whooped, often in front of crowds of lunching onlookers (and, this being New York, commentators). Didn't care. I love those Manhattan park chess players. That whole scene, with crowds gathering around active tables of chess games in city parks, feels like a relic. A civil gathering of scores of diverse people to compete and match wits.

After 9/11, Zuccotti was pretty banged up, then used as storage for years before eventually being rebuilt and reopened. By the time the new and improved Zuccotti Park was unveiled I was a senior in college at Pace University nearby, disappointed that I'd soon be done with school, finally done with downtown Manhattan, and wouldn't get to enjoy the fresh new version of Zuccotti which now had marble slab tables with chess boards built into them.

Nevertheless, I don't think they play a whole lot of chess over there. It's a relatively tiny park, occupying essentially one city block. Washington Square Park, by comparison, is huge. That's where the real New York City park chess scene takes place. My sister lives down the street from there now. Last Christmas I was staying at her place, snapped a pic of some chess players in the park one afternoon while walking through. 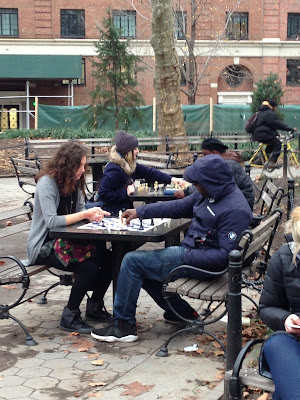 As with other elements of my life, my chess interest originally sprang from my love of the Wu-Tang Clan, particularly the group's most devoted chess players, RZA, GZA, and Masta Killa. They've talked about the game often, rhymed about it frequently, filmed chess-inspired music videos, the cover of the Liquid Swords LP is a bloody Marvel comic scene of a chess board battle, GZA did a whole chess-themed record with DJ Muggs called Grandmasters. Chess even gets its own chapter/chamber in RZA's Wu-Tang Manual---suffice to say, it's an integral part of the Wu-Tang mythology. So as a dedicated Wu head from Staten Island, I felt as a kid that I must learn the game. The more I got into it, I realized being in the habit of playing chess, thinking about chess moves, enhanced my focus in life and helped with decision-making. It's a mindfulness practice. My mind felt better organized during periods when I was playing chess. Not unlike listening to heavily lyrical hip hop, it's a type of mental exercise. And it's addictive.

RZA has been an outspoken advocate of chess for years and even created a Hip Hop Chess Federation to educate children. Their slogan is: "Fusing logic and the arts to unite minds and hearts."

That fusion of logic and arts that chess embodies is what has fascinated me most about it recently.

So many prominent artists were also chess enthusiasts.

Among these, the most notable must be legendary 20th century artist Marcel Duchamp, who was such a chess junkie that at one point during the height of his career he basically gave up on creating art to pursue playing chess full time. I've written once before about this, he eventually slowed down his obsessive chess playing and returned to the arts, but maintained his interest by becoming a chess journalist and blessing us with some insightful, eloquent commentary on the game.


"I have come to the conclusion that while all artists are not chess players,

all chess players are artists." - Duchamp

Here's a video of Duchamp discussing chess, which he likens to an addictive drug, while standing in front of the Chess Players piece I shared above.

And here is a famous photograph of Marcel Duchamp playing chess against a nude Eve Babitz [oh and NSFW? but it's art goddammit!]. 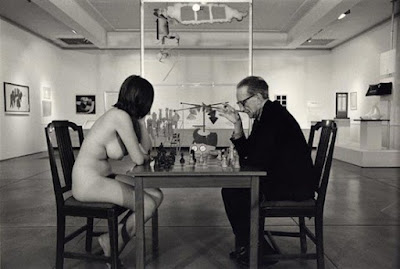 Behind them lies Duchamp's masterpiece, the extraordinary glass pane entitled The Bride Stripped Bare By Her Bachelors, Even. (You can read the full story behind that photo in this detailed Vanity Fair piece.)

The combination of chess and lust invoked by the image reminds me of a memorable scene in an old Seinfeld episode. Jerry is dating a woman who disgusts and irritates him but she's irresistibly attractive physically, likening his conundrum to a chess game between his brain and his penis.

As I mentioned, RZA has long been a proselytizer of chess and there's a slew of random RZA chess videos around the internet to prove it. He plays against a New York Times chess editor, he plays against a young grandmaster, he freestyles in a cypher after a chess tournament, lectures at a chess symposium, there's even footage of a live concert that begins with RZA and Yoko Ono playing chess on stage:

You can imagine what a thrill it was for me when I explained to the Turkish chess master coworker that my chess interest stems from the influence of The RZA and Wu-Tang and he responded that he'd actually played a couple games against RZA once when The Abbott had visited his chess club in Los Angeles years back. He showed me a pic. So the guy I've been playing chess with has actually played against the artist who sparked my interest in the game in the first place. I find that incredible.

During this recent period where my interest in chess has fired up again, I've simultaneously developed a new interest in the life and work of author Vladimir Nabokov. I'd been stumbling upon Nabokov biographies in bookstores, thumbing through them and learning more about him, developing a fascination for this esteemed and controversial scribe. Picked up a thick collection of his short stories and have found them to be about as pleasurable to read as any stories I've ever encountered. They're exquisite.

Nabokov was an interesting dude, extremely prolific, a writer so productive he puts most others to shame. He wrote tons of short stories, dozens of novels, books of poetry, books of literary criticism, and somehow was also a respected lepidopterist who published scientific articles on the study of butterflies. He did all this while trying to survive on income from, variously, working as a tennis instructor, boxing instructor, language teacher, and eventually literature professor at Cornell. With all that going on, he was also an ardent chess enthusiast.

He wrote a chess novel called The Defense and spent ample time composing chess problems about which he wrote: "The strain on the mind is formidable; the element of time drops out of one's consciousness." He felt that chess problems "demand from the composer the same virtues that characterize all worthwhile art: originality, invention, conciseness, harmony, complexity and splendid insincerity."

Nabokov had a very involved, collaborative relationship with his wife, Vera. He read every story and novel to her as he was writing them, then she'd type them all out for him. She was also an avid chess player and they played each other every day. There are some charming photos of the Nabokovs playing chess together like this one.

The filmmaker who adapted Nabokov's most famous novel Lolita to the screen, Stanley Kubrick, was also an avid chess player. While growing up in New York City, Kubrick honed his game partaking in the chess battles of Washington Square Park and was part of a chess club nearby. In the Wu-Tang Manual, RZA comments on Kubrick's habit of always keeping a chessboard on set during the shooting of all his films, challenging any and all takers. The game appears in many of his films and he was even a member of the United States Chess Federation. A short piece in The New York Review of Books entitled "Playing Chess with Kubrick" details physicist Jeremy Bernstein's experience of befriending Kubrick and getting beat in chess over and over again.

Since Nabokov wrote the screenplay for Kubrick's Lolita film, I wonder if the two geniuses ever actually sat down for a chess game... I can't find any documentation of it, but surely they must have. What a fascinating battle of the minds that would've been.

To conclude, here is an awesome video essay on "What Chess Taught Kubrick About Filmmaking" that goes into much further detail about Kubrick's love of chess and how it factors into his films: