Ranking the Albums of the Wu-Tang Clan 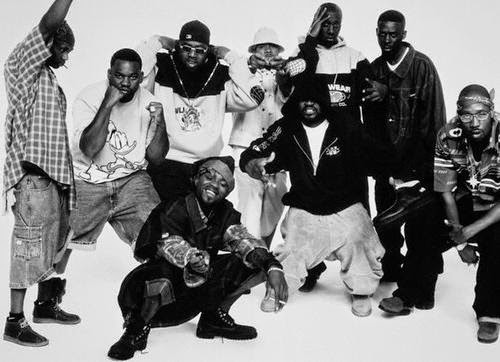 The Wu-Tang Clan will form like Voltron once again. The Staten Island supergroup, widely considered to be the greatest rap group of all time, is set to release their 6th studio album, A Better Tomorrow, next week in commemoration of their 20th anniversary. Generating a massive amount of media buzz for a bunch of 40-something rappers (many of whose contemporaries have faded away by now), they are also going to be auctioning off a single-copy "secret" album, Once Upon a Time in Shaolin, which has already garnered multimillion-dollar offers and may never be heard by the general public.

As the 9 lyrical swordsmen are primed to release their first official group album in seven years, here is how I rank the five albums in their catalogue. 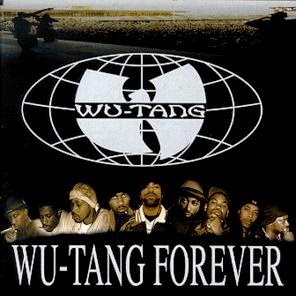 This two-hour double-LP represents the apotheosis of the Wu-Tang Clan. While 1993’s Enter the Wu-Tang: 36 Chambers is universally ranked as one of the all-time great rap albums, the Clan only improved from there---Forever is what immortalized the Staten Island faction.

It’s a testament to the brilliance of The Rza (the crew’s de facto leader) that he could organize the contributions of the full 9-member collective, plus affiliates Cappadonna and Streetlife and even the underrated efforts of his beat-making disciples True Master and 4th Disciple, into one giant cohesive listening experience. The result is one of the finest hip hop albums ever.

Given four years to evolve and establish their individual styles, everyone in the Clan had reached their peak abilities by this stage. Each rhyming superhero in this Justice League conglomerate of colorful personalities could now make their unique presence felt on a track. Thus, the famous verses of Inspectah Deck on “Triumph” (considered one of the most memorable rap verses of all time) and Ghostface on “Impossible” (heralded by Rza in The Wu-Tang Manual as the best Wu-Tang verse ever written) don’t entirely overshadow the likes of U-God nimbly navigating a rapid delivery of dire social commentary on “A Better Tomorrow” or swinging “waffle iron hooks” on “Heaterz”. There’s hardly a weak verse uttered on the whole double-album; the hierarchy of talent among the group’s ranks was more condensed than it’s ever been.

Upon the release of Wu-Tang Forever, the New York Times commented that its lyrics were “as dense, obsessed, prolific and full of popular and arcane references as a Pynchon novel.” The deep batch of intricate, esoteric lyrics exalts this album above the rest but Forever also punctuated a staggering stretch of elite and prolific production work from Rza. He’d previously produced the entirety of Wu solos Only Built 4 Cuban Linx, Liquid Swords, and Ironman, all of which went gold and met with critical acclaim. The master producer created a distinct sonic environment on Forever, with a consistent thick bassline and crisp snares forming the foundation of every beat, even the ones produced by his students 4th Disciple and True Master which are virtually indistinguishable from their mentor’s work. Violins feature prominently throughout, most notably on the orchestral-sounding “Reunited” and “Triumph”. This album may even be the first time a producer used sped up, chipmunk-like vocal samples as Rza did on the alternately sped up and slowed down beat on “For Heaven’s Sake”.

If I had to choose one album to represent the art of Wu-Tang, this would have to be it. The flavorful blend of lyrical styles installed over a vast collection of string-heavy, immersive head-nodding beats makes this an album you could listen to forever. 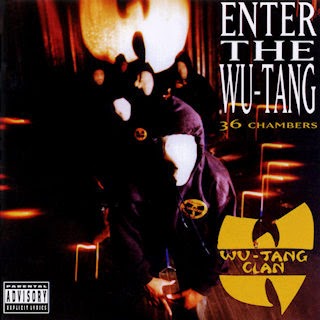 The album that birthed a movement. The Wu-Tang Clan stomped onto the scene with an original, raw interlacing of funk, soul and the ruggedest hardcore hip hop the music industry had ever witnessed. Twenty-one years after its release, the Wu still hasn’t had any takers on their album-opening challenge to “Bring da Ruckus”.

With a slew of catchy-chorused classics like “C.R.E.A.M.”, “Shame on a Nigga”, “Protect Ya Neck” and “Wu-Tang Clan Ain’t Nuthing ta F’ Wit” it is an album of infectious anthems, there’s even a persistent chant of “Wu! Tang! Wu! Tang!” threading the 12-track record. Lyrics loaded with references to kung-fu flicks, ghetto travails, chess, 40 ounces and weed are uttered in snarling, roaring, top-of-the-lung flows as 9 emcees trade verses over Rza’s gritty, crackling melodies. Besides the charismatic, catch-phrase-spouting soon-to-be-superstar Method Man, it’s Ol’ Dirty Bastard who stands out with his unique way of veering on and off the rails of the track while somehow always remaining in key. One can only wonder what the rest of the Wu catalogue would sound like if he’d have been present more. 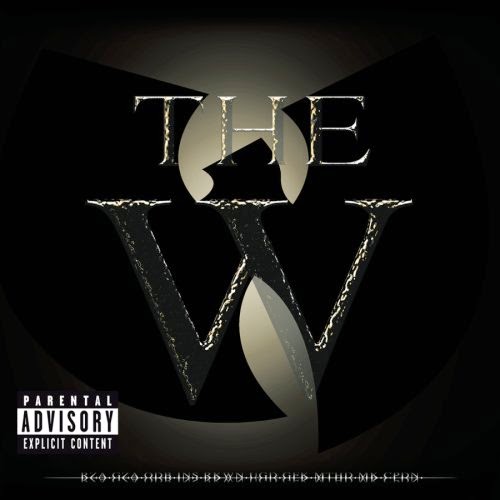 It doesn’t hold nearly the reputation of its monolithic predecessors, but among diehard fans The W is considered a cult classic. The lyrical swordsmanship remained precise as ever and they even invited fellow rap luminaries Redman, Nas, Snoop Dogg, and Busta Rhymes to sit at the round table, marking the first appearance of outside artists on a Clan album (and creating an amusing combo of Snoop and Ol’ Dirty Bastard on “Conditioner”).

The cooperation of such a massive group of talented egos is one of the great fascinations of the Wu-Tang Clan. It cannot have been easy adding in outsider verses at the expense of one of the 9 emcees fighting for mic time, but somehow The Abbott accomplished this admirable feat of personnel management. Oft-overlooked 9th member Masta Killa even gets a solo track on The W, the superb “One Blood Under W” (featuring Junior Reid).

Fresh off composing his first original film score for Jim Jarmusch’s heavily Wu-influenced 1999 movie Ghost Dog, Rza’s production took on an experimental and cinematic angle. The crisp, polished tones showcased on Forever partially regressed back to an intentionally antiquated sound. Verses were distorted with hissy, dusty filters. Drum patterns flip mid-track or patter at off-kilter paces to sound like they were played live. “Hollow Bones” doesn’t even have drums at all, just a slow soulful sample loop of “That splashed against my hollow bones/ that rocks my soul.”

Previously overshadowed by bigger stars like Method Man and Raekwon, this album is where Ghostface Killah ascended to superstar status. The development of his strikingly eclectic, abstract lyrics and liquid flow had fully matured on the 1999 solo LP Supreme Clientele. Now Ghost, accompanied by Rza, featured on The W’s two standout tracks, “I Can’t Go to Sleep” (featuring Isaac Hayes) and “Jah World” (ft Junior Reid), probably the two most emotional Wu tracks ever. 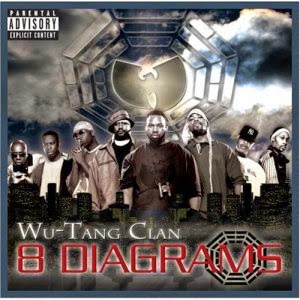 Raekwon was wrong. Despite the largest presence of any member on 8 Diagrams, Rae notoriously panned it upon release, publicly chastising the “hip hop hippie” Rza because of his new fondness for guitars. But the guitars did not terribly hamper the album’s production (with the exception of the overproduced mess “The Heart Gently Weeps”). Instead, the chink in Rza’s armor was his inexplicable inclusion of whiny R&B hooks. This about-face angered the Wu-Tang diehards who held Rza to his emphatic anti-R&B credo expressed on his manifesto opening Wu-Tang Forever Disc 2. Guitars weren’t a big deal, no. Letting the likes of Dexter Wiggle, Sunny Valentine, and Tashmahogany croon all over a Wu-Tang album deserved scorn, though.

Raekwon’s close confidant Ghostface also expressed displeasure with Rza’s departure from the signature rugged Wu sound and was a meager participant on the record, appearing on just three verses and a chorus. Shockingly, he didn’t even manage to submit a verse for the ODB tribute “Life Changes”, the only member absent from an otherwise excellent, heartfelt track.

The album’s legacy will focus on the fractious group relations surrounding it and Rza’s bizarre reversion to using soft R&B choruses, but that negativity obscures a strong overall record. Fourteen years deep in the game, the Shaolin conglomerate showed they hadn’t lost a step, unfurling their customary Witty Unpredictable rhymes masterfully through fast-paced flows on the breakbeat jams “Windmill” and “Wolves” and stomping with authority on the horn-heavy “Rushing Elephants”. With key player Ghostface largely absent, a new star emerged unexpectedly with Masta Killa frequently taking the spotlight. The normally stoic Masta displayed a newfound charisma and freshly enlivened delivery while reeling off memorable lines like, “Shook ones looked/ while they hung him on Hercules hooks/ they found his body in a shallow brook/ escaped on foot.”

The mutiny of Rae & Ghost certainly held some credence, but Rza’s poor decisions didn’t steer the ship too far off course. 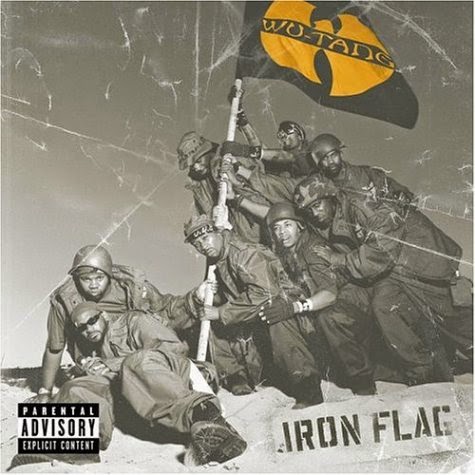 A perfect disappointment. Dropping just a year after The W, the release of Iron Flag took fans by surprise and so did the content. The Clan was entering into a fallow period, with underwhelming solo releases like Ghostface’s Bulletproof Wallets and Rza’s Digital Bullet preceding what most fans agree to be the weakest Wu-Tang Clan album.

While the lyricism remained sharp, the beats sound commercial, as though Rza was seeking a more mainstream appeal. He even conceded production responsibilities to unaffiliated outsiders on a couple tracks, the first time that had been done on a Clan album. Noticeably lacking the passion and energy the group had become famous for, it’s their only album completely devoid of any appearance from Ol’ Dirty Bastard. Oddly, honorary 10th member of the crew Cappadonna is also absent and was even airbrushed out of the cover photo.

Iron Flag does have some bright spots, specifically the imposing title track celebrating the clique’s brotherhood, the graphic storytelling on “Babies”, and the whirlwind flows and chemistry displayed on the posse cut “Uzi (Pinky Ring)” but overall it is an unfocused, unimpressive, and unremarkable record from a group we expect more from.
Posted by PQ at 9:56 PM