On Reluctantly Returning to NFL Fanhood 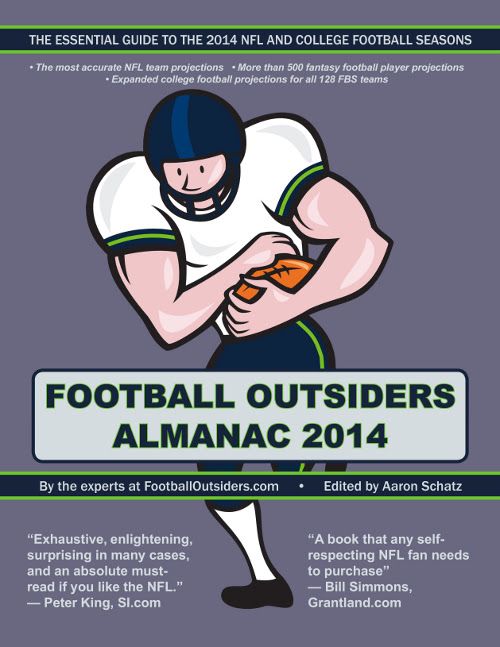 The NFL season officially began yesterday and I didn't watch a minute of it.

I've had a love/hate relationship with football for a while now. This year my interest has been rekindled to such an extreme that I've been devouring all the season preview material I can find---especially the fantastic Football Outsiders Almanac 2014---and yet I still don't have any desire to watch games yet.

If I had to rank the available methods for consuming NFL football from most to least favorite, it'd probably look something like this:

The Madden franchise helped lead me to become an NFL fanatic for a good decade or so. I didn't care about football growing up until I was in junior high, then it was football videogames and an exciting New York Jets team (in 1998) that combined to reel me in. Not long afterwards I was ritually recording the Jets game on VCR each Sunday so I could spend the rest of the week watching it closely, then trying to reenact their gameplan in Madden using the same players. I lived and died with Curtis Martin, Vinny Testaverde, and Wayne Chrebet. I was furious when Laveranues Coles departed to the Redskins in 2002 (the Jets would eventually trade to get him back a few years later).

Sometime during the Eric Mangini era I grew tired of the Jets and the NFL in general. The lack of guaranteed player contracts and consequent high roster turnover annoyed me. The absurdly intensive media coverage (especially by ESPN) became oversaturating and irritating. As more and more negativity sprung up around the league with a dangerous concussion epidemic, unruly players becoming known for off-the-field infractions like rape and domestic violence, and a practically unacknowledged steroid problem, the NFL tried to save face by aligning more and more closely with a phony patriotism that only pushed me away even further.

Beyond that, the experience of actually sitting and watching an entire football game with no fast-forwarding has become unbearable for me, unless I'm watching with friends. In major league baseball right now, the hot topic is the need to adjust pace and length of games in order to make it more interesting and appealing for fans but football has the same problem. In fact, maybe I'm biased but I've always considered football to be the most boring of all the four major American sports.

I'm bored by all the incomplete passes, runs stuffed at the line, punts out of bounds, and kickoff returners taking a knee. Pro wrestling style celebrations from players after basic football plays infuriates me to no end. I've had to shut off my TV on multiple occasions after seeing some fat lineman dance around having just made a tackle on 2nd down.

I love the real action (and laud the likes of Eagles coach Chip Kelly for trying to speed things up), but there is far too much downtime and filler junk in NFL games. A Wall Street Journal article from 2010 concluded that NFL games average just 11 minutes of action. Most of the airtime is dudes standing around waiting for the next play or coaches talking into their headsets. I do retain a love for NFL highlight shows but without cable, those are a little harder to come by these days.

The upward momentum of my up-and-down interest in the National Football League has mainly sustained itself through playing fantasy football and reading great writing on the sport, particularly the analytical stats-based annual book Football Outsiders Almanac. After purchasing this year's version of the gigantic and extremely info-rich book, I realized that I've now purchased it every other year since 2010. This hasn't been intentional, it's just a reflection of my bipolar relationship with the sport.

Reading great writing on a certain subject tends to lead one toward an interest in that subject* and the folks at Football Outsiders have done a phenomenal job of sparking my NFL interest over the years. Organized in the same fashion as the Baseball Prospectus annuals (from which Football Outsiders originally sprung as an offshoot), the book features essays discussing each team's current outlook, followed by analytical treatment for each part of the roster (offensive line, defensive front seven, secondary, special teams) with a separate section going more in-depth on all the skill position players like quarterback, running back, etc. All of it is based on carefully crafted stats (the main one being DVOA or Defense-adjusted Value Over Average) and objective analysis. The book contains analysis for just about every single player you could ever expect to possibly pop up on your team's roster. What makes it such a gold mine that keeps me up late digging around in it though is the sharp, witty, well-informed writing. That, and the astounding wealth of statistical information the book is assembled around.

It also happens to be the best fantasy football guidebook you can find, bar none. My competitive nature when it comes to fantasy football leagues never did go away. I first participated in a fantasy league (for money) back in 2001 when I was 16. My brother John, who's got 16 years on me, brought me along to be in a long-standing league with he and some friends. The group of thirty-somethings weren't too happy when I ended up with the first pick in the draft, snatching up Marshall Faulk, and even less so when I won the league championship and a $1,000 prize.

While my interest in football has waxed and waned over the years, I've kept a consistent streak of kicking ass in fantasy football leagues. Bouncing around a few different cities made it a little harder to find a league for a few years, but last season I caught on with some friends who run a league with an auction style draft. Somehow I managed to stack my team's roster with Peyton Manning, LeSean McCoy, and Jamaal Charles (who finished as probably the 3 best players in the sport) and ran away with the league prize in my first year.

This year I took a different approach in the auction draft, letting others overpay for the likes of Manning, McCoy, and Charles who I see as major candidates for regression. Instead I assembled a roster with a few solid, dependable stars like Matt Forte, Julius Thomas, and Jordy Nelson while complementing them with plenty of high-risk, high-ceiling players like Percy Harvin, Cam Newton, Michael Crabtree, C.J. Spiller, and Chris Johnson. Whereas last year's was a top heavy squad dependent on a few horses to lead me to the crown, this year I tried to build a deep stable with above-average back-ups at every spot. I even picked up two team defenses, Buffalo and Arizona, projected to be among the league's top 10. There's always plenty of luck involved in this stuff, ya never know who'll suffer a concussion or tear an ACL, so we'll see how it goes.

The NFL was dealt another blow to its reputation today with the Ray Rice situation growing more disturbing and as this type of crap (and the concussion scandal the league desperately tries to sweep under the rug) occurs with more regularity it gets tougher for me to buy into "America's game" and all the attention it demands. The biggest money-making entertainment machine in the country is an exploitative and ugly, twisted system. Quentin Tarantino weaved a painfully incisive subtext (explored here by William Klaus) into his film Django Unchained insinuating a link between slavery and the industry of pro football that I'm often haunted by, making it even more of an inner conflict as I indulge this guilty pleasure.

When I can manage to simply focus my attention on the gameplay, the strategies, the world-class skills on display, the intricate choreographed play designs memorized and enacted by all participants, the thrilling growth and dominance of the passing game, the prominence of teams like the Seahawks, Broncos, Saints, Patriots and 49ers, the magnetic appeal of underdogs like Carolina, San Diego, and New York (ahem, Giants), and the many fantasy football/skill position superstars that really make the game what it is, I find it easy to get lost in fascination and awe.

Then the Stupor Bowl comes along and I'm once again alerted to the necessity of navigating through all the bullshit and reminding myself just how frighteningly big this game has become.

*Speaking of great writing, go read Andrew Sharp at Grantland on the problems posed by football where he writes: "This is the league we have now. It’s full of stomach-churning juxtapositions, glaring blind spots in policy, holes in logic, and all kinds of other insults to our intelligence that make it a little harder to keep watching this sport every year."
Posted by PQ at 11:11 PM