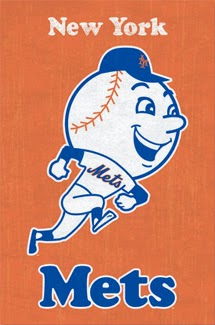 Last week I wrote my first piece for the popular Mets blog Amazin' Avenue, covering the team's success with forming a bullpen after years of frustration in that department. It's the first of what I hope will be many articles for me at Amazin' Avenue and I'm honored to be given the opportunity to contribute there as I've been a regular reader of theirs for years.

As fun and exciting as it is to write about baseball, the material tends to be transient as teams are playing every day with new and unforeseen events constantly occurring and changing the outlook on things, and relief pitching especially is notoriously volatile. Since I wrote that piece, Mets closer Jenrry Mejia (who I praised quite highly) has been completely bombed and revealed that he's been playing through multiple injuries, among them sports hernia. The team is letting him pitch through it but he's getting smacked around. So far this month batters have crushed him to the tune of a .981 OPS. It's already been a very frustrating season for Mets fans thus far, there's no use keeping an injured and ineffective pitcher in the closer role. Watching potential wins slip away in the 9th throughout the final two months would be a terribly demoralizing end to the season.

With that said, I still stand by the main point of the piece. The Mets bullpen outlook as a whole looks better than it has in many years.

On another Mets-related note, Jerry Seinfeld did an interview with ESPN.com talking all about baseball and his favorite team, it's a great read. An intensely devoted and passionate fan who says he spends all day thinking about the game, Seinfeld relates:


When I think of retirement, all I would think of is going to a baseball game every day.

I kind of got into the World Cup a little bit and watched some Stanley Cup this year. They're both great, but it's not as good as baseball. Even in replay, the sequence of how the events took place is not as clear to understand. In baseball, you understand as it's happening, you see something that's transpiring in the moment because of the geometry of the game. These other sports don't have that clean geometry. Even in replay, you can't fully diagram in your mind, how did that even transpire?

In baseball, when someone tags up, knowing the excitement of what each guy has to do, and then you watch it. It's unbeatable.