Album Reviews: Life Outside the Frame & The Living Daylights

When it comes to art, no matter the medium, what I tend to find most intriguing is the artist's style, their unique fingerprint. Creativity consists of focusing the luminescent energies of imagination through one's personal prism, bending that light into original forms and angles according to the curves of one's distinctive artistic style. In this way, the best artists tend to strike us with a distinguishable spectral pattern, within the defined framework of their medium of course.

Two recent hip hop albums have been in heavy rotation for me during the first half of the year, both featuring lyricists with strikingly unique styles. Ironically, the two artists are also nearly opposite from each other in their approaches. While the albums share some basic similarities---both being of the underground hardcore rap variety and both collaborative works between one emcee and one producer---one lyricist twirls out heavily-worded abstract bars with rapidity while the other utilizes conciseness, internal rhymes, pauses, and other crafty techniques. One album is loaded with no fewer than 17 multiple-verse tracks; the other is practically EP-length, a quick 35 minutes. Both are compelling in their own way.

Paranom & Purpose - Life Outside the Frame
On his debut album, Paranom shines with a sharp voice and mesmerizing flow. His verses are constant streams of elaborate wordplay and surrealist imagery strung together over the polished, crisp yet somehow rugged production of Purpose. This collaborative project is the latest release from the Massachusetts-based Tragic Allies crew (who I've written about before). These guys are purists, dedicated to the golden era format of hip hop as artwork and they've mastered the craft. 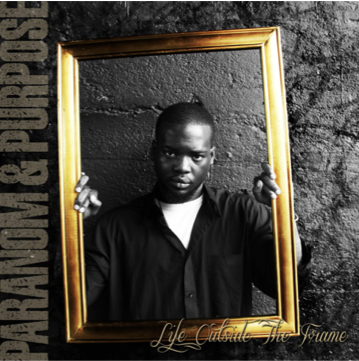 The fluid, precise delivery of dexterous rhymes is a noted specialty of the Tragic Allies contingent (such skills are all over last year's Golden Era Musical Sciences album) and newest member Paranom certainly excels at this, but what's most impressive is the vocabulary and surreal imagery in his unique lyrical arsenal. His raps reward repeated listens; honing in on the swiftly delivered lyrics reveals a rich array of obscure terms like "tetramorph" and "vesica piscis" weaved effortlessly in his writing. The verbal imagery is taken to truly hallucinatory heights in the somnolent track-length trips of "Bee Stings (Seraphémme)" which opens with envisioning "Rose petals pouring liquid steel" and my favorite track "Dreamz" where the second verse begins:

The lyricism alone stands out on Life Outside the Frame but what makes this album so replayable is the full-length production from Purpose. His moody tones and heavy bassliness, occasionally enhanced with DJ scratches, create a cohesive sonic experience. The ostensible leader of the Tragic Allies crew, Purpose is proficient at making others sound good with his lively boom-bap loops. The poet Paranom's endless repertoire of original linguistics thus finds a perfect instrumental canvas to stretch out on and the combo yields potential classics like the mellifluous "Microphone Phenomenal" and the genuinely reflective "Dayz Go By".


Paranom stands out as an artist of limitless potential and talent, if perhaps only underground appeal because of the abstract language of his lyrics. Even if you didn't understand a single word of his verses though, his voice, flow and delivery simply sounds good over beats. Comprehending his words reveals an introspective, poetic intellectual artist who has created an album full of tough, rugged, raw hip hop while hardly uttering a curseword in his verses.

This is the best drop from the Tragic Allies camp thus far, already a personal classic, and Paranom already has a lot to live up to after such an impressive introduction. 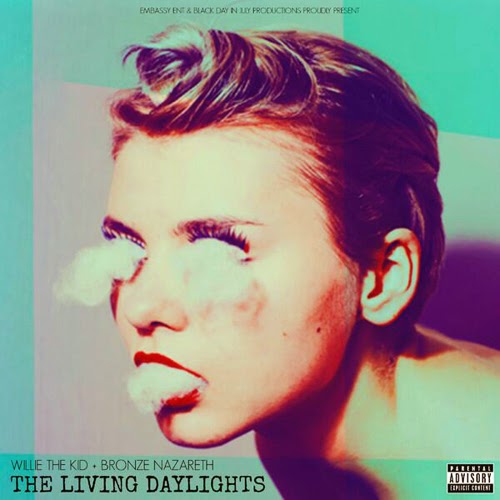 While I had been aware of Willie the Kid for many years based on his name often popping up alongside his Wu-Tang-affiliated brother La the Darkman, I honestly was never compelled to seek out his work simply because of his generic name. Rappers with the appellation "The Kid" or "Young" or "Lil" are a dime a dozen and often the same can be said about their lyrics. A full collaboration with his fellow Grand Rapids, MI native and certified human factory of dope music, Bronze Nazareth, finally brought his work to my full attention. It became immediately apparent that Willie the Kid is a refreshingly unique and highly entertaining artist.  There's a brief line on "The Blitz" that sums up this effect perfectly:


"My abnormal rapport, my normal nomenclature
rare form for the art form"

A noted minimalist with a catalog full of acclaimed EPs and yet no full albums to date, Willie keeps his portions short, rich, and elegant much like an expensive meal. Appearing on 11 of the 13 tracks on The Living Daylights, he is often limited to one verse and his rhymes even feature lots of short bars.

Conciseness is part of the grand design though, as Willie's writing craft is a sophisticated and intricate one. His clearly enunciated verses are full of finesse and flourish. A true connoisseur of words, he calls himself "a thinking man's rapper" and indeed the thinking man will be satiated not only by Willie's wordsmithery but also by the various subtle techniques he frequently employs in his rhyme structures like internal rhymes, pauses, and enjambments. The last part of his verse on "Avalon" is a good example of some of these tactics:

"I'm brave enough to be creative
but I acclimate like a native
trying to blend in with the cadence,
abide by the rules, fuck the latest
trend, I just came for the accolades
Spend
more time on important shit
self-improvement
it's money, assorted shit"

With his "normal nomenclature" comes the expectation that, like most generically-named rappers, he mostly raps (or brags) about wealth and material things. Indeed, Willie obviously has a taste for the finer things but with his respectable artistic pedigree he's kind of a paradox. He raps plenty about opulence, but he tends to keep it creative and original. An amusing example of this: his verses are littered with food. The listener mentally savors all kinds of exquisite cuisines, not to mention there are tracks called "Bless My Food" and "Breakfast in France". Reeling off the names of exotic locales is another favorite device: "The fly, I'm in Dubai hittin' sand dunes/ or in Japan on the bullet train, Cancun."

So impressed by Willie's output, I've yet to touch on Bronze's production (or the album's many guest appearances). Having now produced over a half-dozen front-to-back albums, the beat maestro Bronze Nazareth has gotten to be an expert at making a fully cohesive record and The Living Daylights is just the latest example. A true collaboration which bears the mark of Bronze all over it, there's a nice subtle Wu-Tang feel to the project. It even has a few well-placed kung-fu clips. The tracklist is punctuated by two earth-rattling bangers in "Fucking Blades" and the album's standout "Delirium" which, along with La the Darkman's vicious solo track "Ice Cold Guinness", will make any Wu head nod ecstatically. Beyond those formidable barrages, I've been enamored with the twisted up soul loops on "Coming From" and "Bless My Food".

For such a brief album it has plenty of guest appearances. These range from superb (Roc Marciano on "Avalon"; Sha Stimuli on "Delirium") to forgettable (Sun God on "Wu Babies"; Tekh Togo on "Bless My Food") and the latter is really the only unappealing factor about this project. Listening to the album over and over again, you're left with a hunger for more from Willie the Kid. And the sole rhyming appearance from Bronze on "Coming From" highlights a notably effective and potent contrast between the two lyricists that was evident on past Bronze/Willie collabs "Malcolm X Manuscripts" and "Farewell". Would've been nice to hear Bronze on the mic a little more in lieu of the uninitiated features. As it is though, the burgeoning star Willie the Kid can claim yet another entertaining and rich-in-replay-value record to his name.
Posted by PQ at 4:03 PM