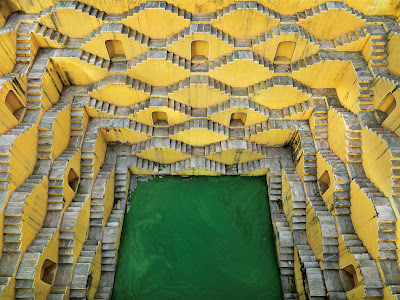 
Between AD 600 and 1850, more than 3000 step wells were dug, by hand, in the Indian provinces of Gujarat and Rajasthan. Many of them had intricate staircase designs, peppered with shrines and balconies on which to linger in the afternoon heat. They reach deep underground and provided insurance against the region's fluctuating water supply.

The stairs guided local people – women, mostly – down to the water that seeps in from nearby aquifers. During the rainy season, the wells fill up, but in the dry season, you would have to lug containers up and down the entire well. This particular well, Panna Meena ka Kund near Amber Fort in Rajasthan, has eight storeys. According to local tradition, you must use different sets of stairs to climb down and climb out. The photograph was taken by Edward Burtynsky for his latest exhibition, Water, which opens at Flowers Gallery in London on 16 October.

You can find some other jaw-dropping photos from Burtynsky's Water project at his website. Here's another one I really like (of a Colorado River delta in Baja, Mexico): 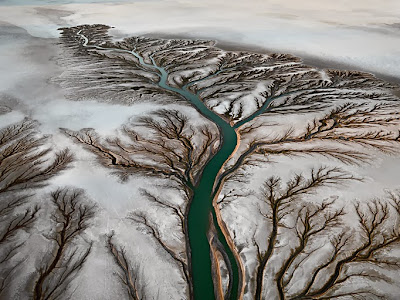