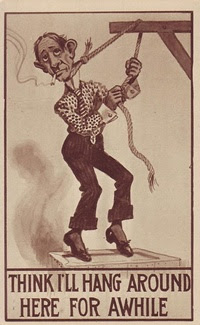 Despite the air of its lofty reputation being one of haughty, high-brow, ivory tower academic density and seriousness, Ulysses is a damn funny book.

I'd like to briefly illustrate its humor by highlighting a favorite selection---a satirical vignette depicting a hanging---from perhaps the funniest chapter, known as the "Cyclops" episode.

Starting with the 11th chapter "Sirens", Ulysses starts to get very strange, incorporating vastly different styles of prose. It's as though the increasingly difficult physical and psychological ordeals dealt with by the hero Leopold Bloom are mirrored by the waves of evolving, ever-weirder prose navigated by the reader in the heart of the book.

For "Cyclops", the 12th chapter, the events are narrated through the perspective of a foul-mouthed, jerky unnamed Irishman who partakes in a late afternoon drinking-and-bullshit session with Bloom and a few others at a pub. But throughout the chapter, the narrator's version of the events with its heavy Irish dialect, wit and narrow-minded, nationalistic ideals is often interrupted by mocking, lengthy parodic riffs written in various styles according to the subject matter. Thus, after the narrator introduces the loud, ornery Bill O'Reilly-esque character known as The Citizen (sitting upon a barstool), we suddenly switch to a description in the style of classic Irish folklore:


The figure seated on a large boulder at the foot of a round tower was that of a broadshouldered deepchested stronglimbed frankeyed redhaired freelyfreckled shaggybearded widemouthed largenosed longheaded deepvoiced barekneed brawnyhanded hairylegged ruddyfaced sinewyarmed hero. From shoulder to shoulder he measured several ells and his rocklike mountainous knees were covered, as was likewise the rest of his body wherever visible, with a strong growth of tawny prickly hair in hue and toughness similar to the mountain gorse (Ulex Europeus). The widewinged nostrils, from which bristles of the same tawny hue projected, were of such capaciousness that within their cavernous obscurity the fieldlark might easily have lodged her nest. The eyes in which a tear and a smile strove ever for the mastery were of the dimensions of a goodsized cauliflower. A powerful current of warm breath issued at regular intervals from the profound cavity of his mouth while in rhythmic resonance the loud strong hale reverberations of his formidable heart thundered rumblingly causing the ground, the summit of the lofty tower and the still loftier walls of the cave to vibrate and tremble.

Or witness the mystical, soul lofting prose (narrated in a great video shared in previous post "Sublime Poetry") that shows up when a character who thought he'd said hello to his friend Paddy Dignam earlier in the day, learns that Dignam actually died and was buried that morning. At the end of the chapter, after a heated argument, Bloom flees the bar with The Citizen screaming and throwing stuff at him, an "old tinbox clattering along the street." Joyce amplifies the tinbox impact through the detail of a news report for a massive earthquake: "From the reports of eyewitnesses it transpires that the seismic waves were accompanied by a violent atmospheric perturbation of cyclonic character."

Perhaps the funniest of all these riffs of stylistic mockitude is the four-and-a-half page description of a ceremonious hanging executed by "H. Rumbold, Master Barber." It begins with this grim scene:


The last farewell was affecting in the extreme. From the belfries far and near the funereal deathbell tolled unceasingly while all around the gloomy precincts rolled the ominous warning of a hundred muffled drums punctuated by the hollow booming of pieces of ordnance. The deafening claps of thunder and the dazzling flashes of lightning which lit up the ghastly scene testified that the artillery of heaven had lent its supernatural pomp to the already gruesome spectacle. A torrential rain poured down from the floodgates of the angry heavens upon the bared heads of the assembled multitude which numbered at the lowest computation five hundred thousand persons.

A public execution is to take place, with an esteemed delegation of political figures from around the world traveling in to witness, they enter in "special quick excursion trains and upholstered charabancs...provided for the comfort of our country cousins of whom there were large contingents." Joyce lists the most prominent members of this delegation, starting with an old, half-paralyzed "commendatore" who has to be "assisted to his seat by the aid of a powerful steam crane." The list of foreign names grows increasingly ridiculous until the final member "Nationalgymnasiummuseumsanatoriumandsuspensoriumsordinaryprivatdocentgeneralhistoryspecialprofessordoctor Kriegfried Ueberallgemein". That has to be the longest single word in Ulysses. Gifford's notes for Ulysses explains that the title here is a joke "at the expense of German compounds" and the name "Kriegfried Ueberallgemein" translates to War-peace Universal (while also punning on the German national anthem "Deutschland, Deutschland über Alles" or "Germany, Germany over Everything").

As that funny name suggests, the whole thing seems to be subversively mocking the dynamics of global relations, nationalism and wars in general. Especially since the gathering of various foreign delegates then immediately gets into "an animated altercation (in which all took part)" and the scene becomes something out of a cartoon or a Leslie Nielsen movie as "In the course of the argument cannonballs, scimitars, boomerangs, blunderbusses, stinkpots, meatchoppers, umbrellas, catapults, knuckledusters, sandbags, lumps of pig iron were resorted to and blows were freely exchanged."

Order is quickly restored, though most of the participants in the scuffle "were bleeding profusely" and the "legal adviser" (think consigliere) to the top dog, the aged aforementioned Commendatore returns the "several hundred ladies' and gentlemen's gold and silver watches" that he'd stolen during the fracas "in the hope of bringing them to their senses." (There's a really salient double meaning there but I can't quite catch it.)

Finally, with peace restored amid the attendees, the executioner known as Rumbold enters the scene "quietly, unassumingly" and this "world-renowned headsman was greeted by a roar of acclamation from the huge concourse," the foreign delegates yelling out cheers in all their different languages: "hoch, banzai, eljen, zivio, chinchin, polla kronia, hiphip, vive, Allah."

We get a masterfully detailed visual description of the executioner and his instruments of death:


Hand by the block stood the grim figure of the executioner, his visage being concealed in a tengallon pot with two circular perforated apertures through which his eyes glowered furiously. As he awaited the fatal signal he tested the edge of his horrible weapon by honing it upon his brawny forearm or decapitated in rapid succession a flock of sheep which had been provided by the admirers of his fell but necessary office. On a handsome mahogany table near him were neatly arranged the quartering knife, the various finely tempered disembowelling appliances (specially supplied by the worldfamous firm of cutlers, Messrs John Round and Sons, Sheffield), a terra cotta saucepan for the reception of the duodenum, colon, blind intestine and appendix etc when successfully extracted and two commodious milkjugs destined to receive the most precious blood of the most precious victim.

They've even got someone from the local "amalgamated cats' and dogs' home" to pick up the blood, organs and entrails for future use.

The victim of the hanging and beheading that is to take place isn't directly identified but this whole scene parodies the accounts of Irish rebel Robert Emmet being publicly executed in 1803 for attempting and failing to incite an Irish revolution against the British. He was convicted of high treason against the ruling British government, the penalty for which was to be hung, drawn, and quartered (incredibly, this was the case in England all the way up until 1870!) I can't help but think of the American whistleblower Edward Snowden in relation to all of this as many of the crusty old political crooks in the United States are now accusing him of treason and calling for his head.

After describing the last meal that was prepared for "the central figure of the tragedy" and how he "rose nobly to the occasion and expressed the dying wish" that his final meal be donated to a home for the sick and needy, the victim's wife enters and the prose slips into a humorously sweet, tender romantic color:


The nec and non plus ultra ["the uttermost point that can be attained"] of emotion were reached when the blushing bride elect burst her way through the serried ranks of the bystanders and flung herself upon the muscular bosom of him who was about to be launched into eternity for her sake. The hero folded her willowy form in a loving embrace murmuring fondly Sheila, my own. Encouraged by this use of her christian name she kissed passionately all the various suitable areas of his person which the decencies of prison garb permitted her ardour to reach. She swore to him as they mingled the salt streams of their tears that she would ever cherish his memory, that she would never forget her hero boy who went to his death with a song on his lips as if he were but going to a hurling match in Clonturk park. She brought back to his recollection the happy days of blissful childhood together on the banks of Anna Liffey when they had indulged in the innocent pastimes of the young and, oblivious of the dreadful present, they both laughed heartily, all the spectators, including the venerable pastor, joining in the general merriment. That monster audience simply rocked with delight.

The love and affection on display eventually has the enthralled audience  "overcome with grief" and this part always makes me laugh out loud:


A fresh torrent of tears burst from their lachrymal ducts and the vast concourse of people, touched to the inmost core, broke into heartrending sobs, not the least affected being the aged prebendary himself. Big strong men, officers of the peace and genial giants of the royal Irish constabulary, were making frank use of their handkerchiefs and it is safe to say that there was not a dry eye in that record assemblage.

The ridiculousness is kicked up a notch as "a handsome young Oxford graduate" steps out from the crowd to ask for the hand of the soon-to-be widow, "presenting his visiting card, bankbook and genealogical tree, [he] solicited the hand of the hapless young lady, requesting her to name the day, and was accepted on the spot."

To commemorate this awfully ceremonious occasion "a tasteful souvenir of the occasion in the shape of a skull and crossbones brooch" is given to all the women in attendance and the tears continue to flow as the "handsome young Oxford graduate" places an engagement ring on the finger of his "blushing fiancée."

The vignette closes with a stern military colonel sniffling, wiping away a tear and murmuring to himself about his own wife. And that's all. No description of the hanging,* just a brilliant subversive and playful parody of the preparatory proceedings, underscoring in a perfectly Joycean manner the absurdity of nationalistic fervor.

*For that, check out the Croppy Boy scene in the exaggerated, intensely trippy "Circe" chapter.
Posted by PQ at 12:17 AM