Hot as a Texas Summer

With a few lengthy but unfinished posts clogging up the pipeline, I might as well take a break and talk a little bit about the Mets and my first live baseball experience of 2011.

I went to sleep last Friday night undecided on whether or not it would be worth driving a total of 7 hours by myself back and forth to Arlington to watch the visiting New York Mets play the Texas Rangers on Saturday. When I awoke Saturday morning I couldn't recall my dreams but there were baseball images, players, scenes, thoughts left over in my mind and I realized my unconscious mind had made the decision for me.

I quickly prepared some long-drive materials (music, snacks, directions, places to eat on the way) and hit the road. After over 3 hours of driving through a boring flat landscape, I got closer to Arlington and was driving on single-lane roads through farms with haystacks, horses, and cows. Finally I saw the huge ballpark's castle-like outer walls. As I approached, I was confronted by an imposing, enormous bulb that looked exactly like a spaceship had landed and settled in the grass. I later realized it was the gaudy new Dallas Cowboys stadium.

I entered the Ballpark in Arlington through its centerfield gate and the place was packed though surprisingly pretty easy to maneuver around. I picked up a scorecard and searched in vain for a pen to use. In the process, I didn't come away with a pen but did encounter the strongest Texas accents I've ever heard.  The game had already begun and when I peeked out at the bright emerald expanse there was Carlos Beltran standing at third and the Mets had already tacked on 2 runs before recording an out (Beltran had brought in both runs with a triple). It seemed my long drive would be rewarded with, at the very least, a competitive effort from the New York nine.

When I reached my seat in the middle of the right field grandstand, it was already 3-0 Mets and the sweaty crowd around me was getting annoyed. In a row of 16 seats I had to maneuver past everybody to sit in the 8th seat and I sat next to a lovely woman who was at the game with her family, she even let me borrow her pen (a pink "girly pen" she warned) to keep score for the whole game and we chatted it up through the ebbs and flows of the game.

Here's the view I had: 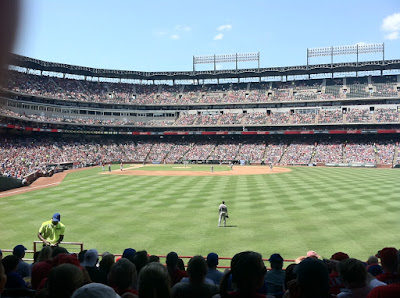 The Mets went down quickly in the 2nd inning but then knocked in another 3 runs in the third to take a commanding 6-0 lead. I was jubilant after my team's aggressive start but I was also by this point soaking in (literally, it was around 100 degrees) my surroundings and having old memories of admiring this park on television over the years. It was infamous for "it ain't over til it's over" kind of games because the sweltering Texas air allows the ball to fly out of the park easily. Sure enough, Mets starter Jonathsn Niese gave up back-to-back homers the next inning and the big lead was cut to 6-2. Then came the 6th inning.

I've been going to Mets games for about 10 years now and there were a few years in NY when I managed to get to about 10 games a year. I can't remember ever witnessing as unrelenting an offensive onslaught as they executed in that 6th inning. The first 8 batters of the inning reached base before an out was recorded. By the end of the inning they had blown the game open with 8 more runs, making the score 14-2! I literally could not have imagined a more satisfying performance from my favorite team. 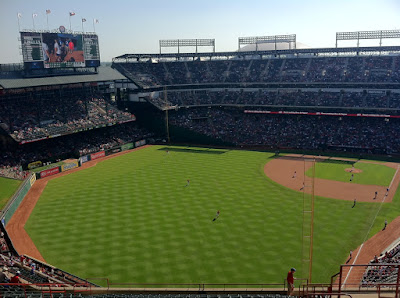 With the game essentially out of hand, I decided to get up out of my seat and walk around the premises a bit. I ended up sitting at the very top of the stadium, up in the last row deep in left field. I could see off in the distant horizon the cluster of towers that make up the city of Dallas and, to the west, a smaller cluster making up Fort Worth. Beyond the ballpark walls I could see the domed top of the Cowboys stadium gleaming. To my right, a cowboy with sunglasses was guzzling a Coors Light with crushed cans of the same scattered around him. Way down below, the Mets closed out a big victory and I sat for a moment pondering the vastness of Texas. The ride home was unbearably bland and filled with lonely farmland as I stared in stupefied surprise at some of the rural flat emptiness in the vicinity of one of the planet's largest and most expensive super stadiums.

Over the years, when I would play baseball video games and watch nationally televised ballgames, I had always looked upon the Ballpark in Arlington as one of those really cool stadiums with its own unique characteristics and game-altering aura but I could never picture it as an actual destination for viewing a game. I could never picture myself ending up in the heart of Texas watching a baseball game (where the crowd actually sung "Deep in the Heart of Texas"!). Now, here I am and there I was.

Having ticked another ballpark off my list, I've been considering other parks that I may or may not end up attending in the future. I find it hard to envision a scenario where I would end up seeing a game in Detroit's Comerica Park. I have never been to the city of Detroit and don't foresee myself going there in the near future although, with it's rich musical history (and my current favorite musicians present there), there's always a possibility I'll stop by.

After laying two consecutive whoopings on the Rangers, the Mets now find themselves in Motown facing another first place American League team, the Tigers. With my personal favorite AL team, the Oakland A's, tanking yet again this year I'd been searching for another junior circuit squad to root for and I've developed an interest in this Tigers team. As I discussed in my team previews, they are built to be a very top heavy team but so far this year their lineup has gotten strong contributions from hitters not named Miguel Cabrera. I loved the Victor Martinez signing and V-Mart is hitting as well as ever (.336/.385/.498 AVG/OBP/SLG) but they've also seen catcher Alex Avila come into his own as a major league hitter this year (at the age of 24) putting up perhaps the best offensive season by a catcher in all of baseball. The other surprises are Brennan Boesch (136 OPS+) who most analysts expected to collapse after his sudden ascent last year and the former failed prospect Jhonny Peralta who's having a career year (.311/.360/.531) at the age of 29. Their only problem is that, other than those five guys, nobody else has hit even close to the league average. (It also bothers me to see manager Jim Leyland continue to pencil in three of his worst hitters atop the batting order while putting all five of his legit sluggers further down.)

Peralta, who'd always been considered a poor shortstop for a lack of range (he was even moved over to third base while still with his original team, the Cleveland Indians), seems to be holding his own out on defense and speedy sophomore centerfielder Austin Jackson is covering the vast Detroit middle pastures more than adequately as well so their defense remains reliably solid.

In the rotation, Justin Verlander has been one of the best pitchers in baseball and the Mets will have to face him on Thursday, but the rest of the staff hasn't been all that good. I expected young righty Max Scherzer to take a big step forward this year but he's kind of been treading water thus far.  The bullpen has some good arms on the back end (including one of my favorite new ballplayer names, Al Albuquerque) but they've also got some ridiculously bad walk rates on that staff. The closer Jose Valverde walks nearly five men per 9 innings and there are two other relievers (Albuquerque and Daniel Schlereth) walking over six batters per 9.

As I type this, the Mets are in the middle of yet another offensive outburst with two grand slams against the Tigers already and 13 runs total. I imagine they'll probably continue the streak of making pitchers cry tomorrow when they face lefty Phil Coke who, despite having a birthday within one day of my own, kinda sucks. I'd be surprised and delighted if the runs continue to pour in against Verlander, though.
Posted by PQ at 8:31 PM