Adrian Gonzalez was inevitably going to leave the Padres after the 2011 season. With his relatively cheap contract expiring, he would be on the market next winter looking for a new contract worth upwards of $20 million a year. There was simply no way the Padres, with their low budget ($38 million last year, second-lowest in baseball), could afford to pay him that much. 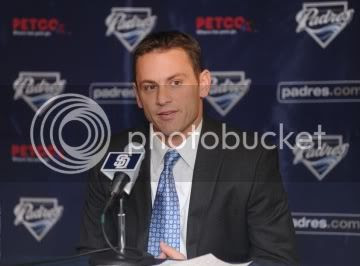 So general manager Jed Hoyer had a choice: either trade the team's best player or hold onto him and let him play out the season before he departs for greener pastures next year. Had he chosen to keep Adrian for one more season and then watch him leave, the Padres would've received a couple of compensatory draft picks for next year's draft. Instead, Hoyer swung a deal with his former employer to bring in a goodie basket filled with hand-picked minor league prospects. It looks like he made a good choice.

The return for giving up the Padre superstar consists of three Red Sox minor league players and the tenebrous "player to be named later." Having served as general manager Theo Epstein's righthand man in that vaunted Boston think tank for the last seven years, Hoyer knew exactly which players he wanted to take from them as these are the kids he originally studied, scouted, drafted and foresaw excellence in to begin with. Hoyer had also brought along the Red Sox director of scouting Jason McLeod when he moved over to San Diego so they certainly had an intricate knowledge of their bartering partner's goods.

Overall, the package looks great although each of the players are still in the stage of development.
Leaving all the emotional stuff aside, this looks like a great move for the Padres. Listening to Hoyer as a guest on Darren Smith's XX1090 radio show during my drive home from work today he compared the deal to the Texas Rangers' sending Mark Teixeira to Atlanta for a bunch of prospects in 2007. Neftali Feliz and Elvis Andrus, who were acquired as prospects in that deal, went on to become big contributors to the major league team that made it to the World Series last year. He also asserted the organization's new emphasis on building a rich farm system that can consistently develop good young players and I think this haul is a great starting point.

Right now, though, these facts are about as easy to swallow as a handful of cold ashes for a Padres fan.

So if these prospects pan out, develop and become stars in the majors, will we have to watch them leave for more money too?

Adrian Gonzalez was an absolutely perfect fit for the San Diego Padres. A Mexican American who was born and raised here in San Diego, he is an all-around awesome player who enjoyed playing here and, in a perfect baseball world without financial competitive advantages, he would have played his entire career in a Padre uniform, had his name right up there with Tony Gwynn for all the career batting records and eventually had a teary-eyed gray-haired goodbye years from now with his jersey number retired. 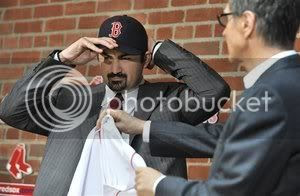 Gonzalez wasn't drafted by San Diego and he didn't begin his career here but he made a name for himself and became an established major leaguer and, eventually, a beloved superstar here. After being acquired from the Texas Rangers in 2006 at the age of 24, Gonzalez quickly became the team's best hitter in his first full season at the major league level. From there he had five straight seasons in which he barely missed a game, played superb defense, and slugged over .500 playing half his games in a ballpark that hitters despise.

Ultimately, though, he played too well as he ascended to the ranks of the best players at his position. With Mark Teixeira signing a monster contract for 8 years and $180 million and Ryan Howard raking in $125 over 5 years, the San Diego first baseman's worth went up. His agent started sending clear signals that there would be no "hometown discount" for the Padres to re-sign him. And now, just like that, he's gone. Off to the Red Sox where he'll battle the Yankees and appear on ESPN all the time. For a Padres fan, this tastes like burning ember ashes. Or like your girlfriend dumped you in the morning and could be seen in the passenger seat of her new boyfriend's Porsche that same afternoon.

Yankee fans don't experience that feeling. Even when a player reaches his twilight, when he thinks he's worth a whole heck of a lot more money than the team wants to pay, there's no worry from the fans. As devastating as it must be for a Padres fan to watch their favorite player (the team's best player) leave while in his prime, it's all the more painful that, simply because of geographical location, other baseball fans don't ever have to worry about such a thing.

Just like with Billy Beane in Oakland, it'll be fun to follow this Padres team as Jed Hoyer tries to build an organization that can compete consistently with a low payroll while constantly losing their best players to higher bidders at the height of their talents. I was impressed with the deal he made to bring in Cameron Maybin from Florida, only giving up two fungible relievers. The signing of Aaron Harang also looks nice but that stuff is slim pickings compared to the Gonzalez deal. The outcome of that trade will be forever linked with Jed Hoyer and his legacy or lack thereof.
Posted by PQ at 8:14 PM