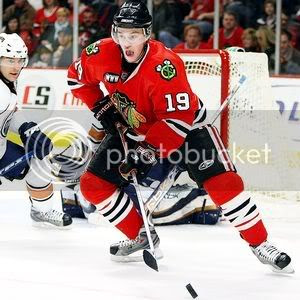 Unfortunately this comes a week late as it's been a busy, event-filled week in my life. But a look at what lies ahead for the season's second half is still appropriate as only a couple of games have been played past the midway point.

We've already looked at the Eastern Conference, now let's dig into the much stronger West.

The standings are as of today, Sunday January 10th.


1. Chicago Blackhawks
(31-11-4) 66 pts
They were predicted by everybody to be a great team and, whaddaya know, they're a great team. Best in the NHL, in fact, with the league's best offense, secondbest defense, and best goal differential. The only possible weakness we were acknowledging before the season, their goaltending, hasn't been a problem at all. Both Cristobal Huet and Antti Niemi have been great.

Outlook: They only look to be picking up steam as the season progresses. They're primed for a deep playoff run.


2. San Jose Sharks
(28-10-7) 63 pts
Just as they've done for the last few seasons, the Sharks are dominating. The combo of Dany Heatley, Joe Thornton, and Patrick Marleau has been amazing. Heatley and Marleau already have over 25 goals and Thornton (yet again) is up there in the top 3 in the league in points. And Evgeni Nabokov is once again awesome. Right now, the Hawks, Sharks and Devils (with the Canucks knocking at the door) are the elite teams of the league but...

Outlook: They've finished the last 2 seasons as the #1 and #2 (behind Detroit) team in the conference but both times were knocked out early in the playoffs. They reshaped the team a bit after getting knocked off by the #8 seed last year but they've retained their talented core and brought in Heatley. It remains to be seen if they can knock their playoff "curse" finally but, with Detroit hanging around the #8 spot right now, another disappointment is definitely possible this spring.

3. Calgary Flames
(26-14-5) 57 pts
They have as much talent as the aforementioned elite teams but they haven't played with any consistency this year, showing flashes of brilliance and then showing up unprepared and getting pounded by weak teams. Miikka Kiprusoff, though, looks as good as ever in net.

Outlook: Consistency and a bit more offense will put them up there with the best. If they keep this up though, a first round exit (precipitated by a drop in the standings) wouldn't surprise. But they've got a good coach and plenty of leaders, so look for them to make a strong push in the end.

4. Phoenix Coyotes
(26-15-5) 57 pts
The league's surprise team at the half. Prior to this season, all their publicity was for the possible relocation of the downtrodden franchise but they've played some great hockey so far and find themselves high up in a tough conference (and tough division). The reality of the situation, though, is that their offense can't hang with the contenders and they depend on their workhorse puckstopper Ilya Bryzgalov and a tight defense to compete every night.

Outlook: They'll make the playoffs as a lower seed, make it interesting, but go bow out respectably.

5. Vancouver Canucks
(27-16-2) 56 pts
A popular Cup pick before the season, they started out shakey and inconsistent but have recently been firing on all cylinders and are shooting way up the standings. Their goal differential is up there with the best teams, their goalie is in the league's top 3, and their offense is surprisingly awesome. Henrik Sedin leads the league in points and Alex Burrows just scored two hat tricks in a row. They're good. Better than their position in the standings right now.

The "Law of Gravity" Division:

6. Colorado Avalanche
(25-15-6) 56 pts
Considering that they were the third-worst team in all of hockey last year, this is a big surprise. The offseason signing of Craig Anderson was the big story early on as Anderson helped launch the Avs' revival but he has since come back down to earth a bit and so has the rest of the team.

Outlook: Solid offense with a lot of youth, they'll end up battling for a playoff spot in the end. The combo of Anderson/Peter Budaj in net ought to let them sneak in.

7. Nashville Predators
(26-16-3) 55 pts
Another surprise team, even though they've had great seasons recently, nobody expected this year's team to do much. The roster really doesn't look all that special at all but they've managed to get the job done with contributions from almost everybody.

Outlook: For me, this is the team that slips out of the mix and allows Detroit to make it in the top 8. They'd be a great team if they were in the East but they're just too mediocre for the West. Not enough offense and Pekka Rinne/Dan Ellis in net just doesn't quite make up for it.


8. Los Angeles Kings
(25-17-3) 53 pts
Probably my favorite team this year. They started out on fire and even spent some time (a day or two perhaps) as the #1 team in the league but have since slowed down a bit. Twenty-four year old Jonathan Quick has shown glimpses of brilliance in net but not quite consistently enough. Anze Kopitar set the world aflame early on but has since come crashing down. They're a young team and this kind of frustrating inconsistency is expected but they've got a ton of talent all around and it'd be hard for them NOT to make the playoffs with this group.

Outlook: At their best, they can play with pretty much anybody (as evidenced by their dismantling of the Sharks last Monday). They'll make it into the playoffs and will give whoever they play a very hard time. Sharks beware.

They've suffered from a ton of injuries but still managed to stay afloat. As the injured bodies start to make it back gradually this team is regaining its strength. Todd Bertuzzi has been revived and is a major force right now and Jimmy Howard has been great in net, stopping 51 shots in a gritty win over the Kings last week.

Outlook: They're the Red Wings so you know they're prepared to compete even despite the departure of Hossa and a few other important players from last year. Nobody wants to see this team in the first round of the playoffs, especially not the rival Blackhawks. This team is ready to wreak havoc in the 2nd half.

10. Dallas Stars
(19-15-11) 49 pts
I'm surprised they're even this high up. The offense can dazzle but they do not defend and their goaltending kind of sucks. And they did not win 2 games in a row once in the entire 1st half.

Outlook: Out of the playoffs.

11. Minnesota Wild
(22-20-3) 47 pts
This is kind of a fun team. They lost Marian Gaborik and their coach Jacques Lemaire AND they've adopted a new style, no longer a strictly defensive approach. This has probably contributed to Niklas Backstrom looking a bit more human. They are basically the definition of mediocrity right now but their games are much more fun to watch and they battle every night.

Outlook: Should cause some trouble for on-the-bubble teams as the season ends but definitely not a playoff contender.

The Disappointments:
12. Anaheim Ducks
(20-19-7) 47 pts
Probably the biggest disappointment of the season. Projected to be a strong Cup contender, they stumbled out of the gate and haven't really been able to regain balance. The seemingly strong combo of J.S. Giguere and Jonas Hiller in net has flopped, Ryan Getzlaf hasn't scored, and they've suffered injuries to Teemu Selanne and Joffrey Lupul. They have started to play better the last week or so, though, and could make things interesting if they keep it up.

Outlook: They came back from the dead last year to dip under the shutting door into the playoffs Indiana Jones-style last year and then upset the top-seeded Sharks. The roster looks great but hasn't played like it thus far but they are certainly capable of a ridiculous run.

13. Columbus Blue Jackets
(18-20-9) 45 pts
Another big flopper. We at least expected that they'd make the playoffs but they're very far from that right now. The crappyness culminate in a nine-game losing streak but, as of tonight, they have won their last three.

Outlook: This team should not be this bad, but, even if they continue to play better they're aren't going anywhere.

14. St. Louis Blues
(18-19-7) 43 pts
They really don't deserve to be lumped in with Oilers who are on a whole 'nother level of suckitude but the Blues suck. They have not much of anything at any position and, even after they dumped their coach, they've continued to suck (although their first game under the new coach was a good battle, albeit a losing one, against the Hawks).

The worst. They've lost a couple players who were expected to be major contributors and nobody's really stepped in to fill the holes. They flat-out suck and will be a punching bag in the second half.
Posted by PQ at 12:30 AM